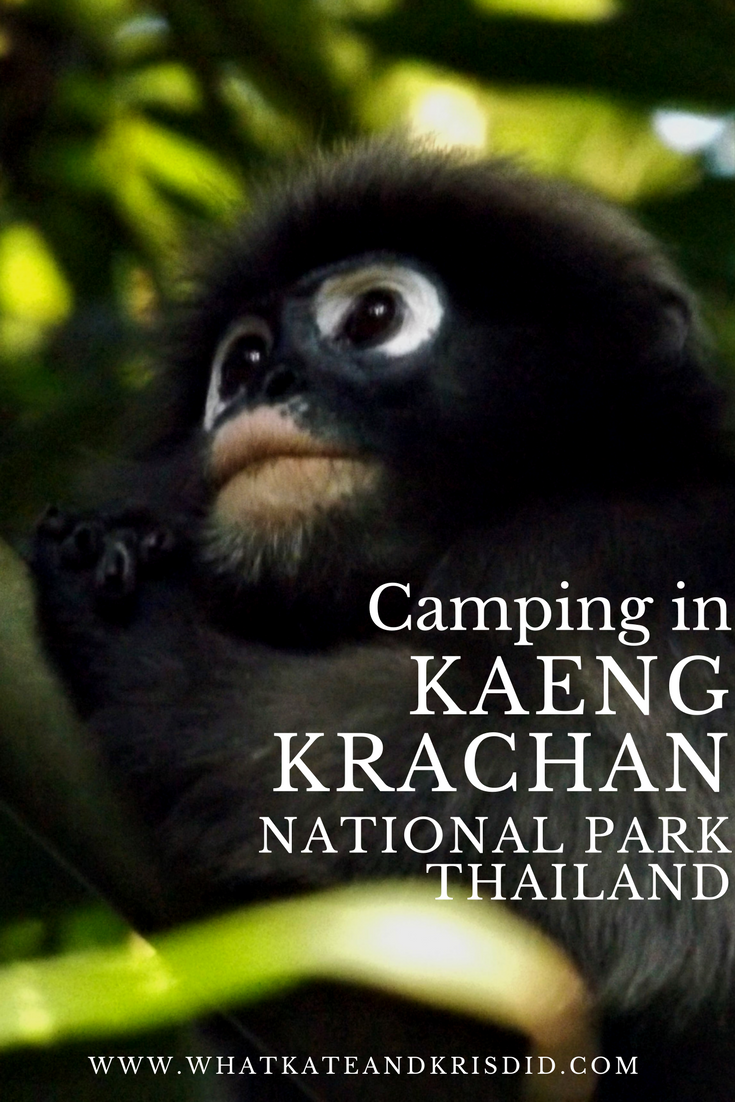 Our bed for the night was a tent at the Ban Krang campsite. Samarn had booked it for us in advance because it was a Thai public holiday. Consequently, the campsite was full. By full I mean packed. It was a sea of tents. Whole families were cooking elaborate meals and playing games together. You aren’t actually allowed to bring alcohol into any Thai national parks, but that didn’t seem to have stopped people! Camping in a sea of tents!

Kaeng Krachan National Park is said to be one of the lesser known national parks, but noone seemed to have told the other people that. It’s obviously very very popular with Thai families on holidays, and potentially at weekends too. Ban Krang campsite is supposed to have porcupines and other animals visiting, but the people probably scared them off.

There is a small ‘restaurant’ at the campsite where you can get meals cooked for you. It being a public holiday, they had instead got trays of food ready prepared. You just point to what you want on rice and they scoop it for you. The staff’s lack of familiarity with foreigners was clear because they looked horrified when we went for food. Clearly worried that they would have to speak English, they tended to ignore us and hope we’d go away. In return, we’d speak to them in our (pretty abysmal) Thai, which worked. Every time we went. And we went four times! The campsite in Kaeng Krachan was pretty loud at night, which isn’t surprising given the number of people. Luckily everyone went quiet at about 10am. Until the next morning. Well, ‘morning’ is perhaps exaggerating a bit. Many people would still be coming in from a night out at the time people started getting up.

Not quietly either. Children were screaming, babies were crying, parents were talking. Breakfast was made, tents were taken down and cars started moving.

Assume they were all heading up to the Sea of Mists, way before the dawn. Perhaps the birds are better then. I don’t know.

It all went quiet again at about 5am when everyone had left.We got a couple of hours sleep before giving up to enjoy our second day in the national park.

Lesson learned – if you choose to camp on a Thai public holiday, don’t expect much sleep

Around Ban Krang campsite in Kaeng Krachan there are trails you can take yourself trekking on. Maps in the campsite indicate the tracks and there are routes signed from the road. The morning trek along the paths south of the campsite took us into dark forest, the thick canopy blocking out the light. If we can pause for an ecology aside, Kaeng Krachan National Park is situated on the boundary of four zoogeographic subregions, which explains the diversity of its wildlife. To the south, there is a mix of semi-evergreen forest and deciduous forest, and to the north, it moves to more evergreen forest. As we’ve mentioned, the park is home to over 400 species of birds in Kaeng Krachan, 300 butterfly species and over 50 species of mammals, including leopards, clouded leopards, elephants and porcupines.

Our morning trek on our Kaeng Krachan tour took us through semi-evergreen forest and deciduous forest. Now, even though we both have backgrounds in ecology, we thought that deciduous described trees that lost their leaves in winter when it got cold. Memories of autumn for us include jumping in piles of multicoloured leaves – reds, yellows and golds, followed by winter with the bare tree branches in the cold dim light. So how was there deciduous forest in tropical Thailand? It’s always hot, right?

Well, it turns out, ‘deciduous’ just means ‘tending to fall off’. It just means the leaves drop, not why or when. In fact, animals have deciduous parts. Deer antlers fall off at certain times of the year and our own baby teeth fall out when we are about 6 years old. While in temperate countries deciduous trees lose their leaves in winter, in tropical countries, they drop them in the dry season. It’s a response to the lack of water. Interesting, eh? We’re quite embarrassed we didn’t know that, to be honest.

Anyway, back to the trek from the south of the campsite. We weren’t sure how many other people had taken this route. The large amount of spider webs zigzagging the paths suggested that no one had disturbed them for rather a long time. And spiders in Thai national parks can get big. Very big. Long spindly legs perched in the webs, supporting massive black and yellow bodies.

We’re not scared of spiders. Bugboy Kris is almost fond of them. But when they seemingly come out of nowhere on a path, it’s a big worrying. Especially when you walk through a web and get it all over your face. You expect one of the spiders to come running across your forehead.

I bet all the arachnophobic have stopped reading…….

Want to know where to see more Thai wildlife? Check out our round up post of lots of national parks and other places you can see Thailand animals.

Let’s move on from spiders. Maybe the arachnophobics will come back.

In the afternoon we took the route north of the campsite. This one wound to and from the road, through the forest either side. Trees around us rustled, and a troop of dusky langurs jumping from branch to branch, some peering down at us from above. They are funny looking things. Their faces almost look like they’ve blacked up, black and white minstrel style. Have you seen the League of Gentlemen (if not, watch it). They look like Papa Lazaru from that. We also found a lovely pond by the side of the road, where we sat and watched brightly coloured damselflies and dragonflies flit around, and watched butterflies bask in the sun. Hanging out by one of the small lakes At the end of a second very long day, Samarn picked us up and took us back to his camp, where our room was waiting for us. A well-deserved beer and some very good food later, we retired to bed.

It wasn’t very easy to find information about Kaeng Krachan, and it wasn’t as set up for foreign tourists as Khao Sok or Khao Yai, but we’d completely recommend visiting, especially if you’re into birds and butterflies.

You can also find guides on:

How to get to Kaeng Krachan National Park from Bangkok

As we said in the previous post, you can take a minivan from Sai Tai Gao (not Sai Tai Mai) the OLD Southern bus station. You buy the tickets from booth number 11, on the left-hand side as you walk in. It costs 200 baht to get to Kaeng Krachen town, and another 50 baht to be dropped at the national park office. 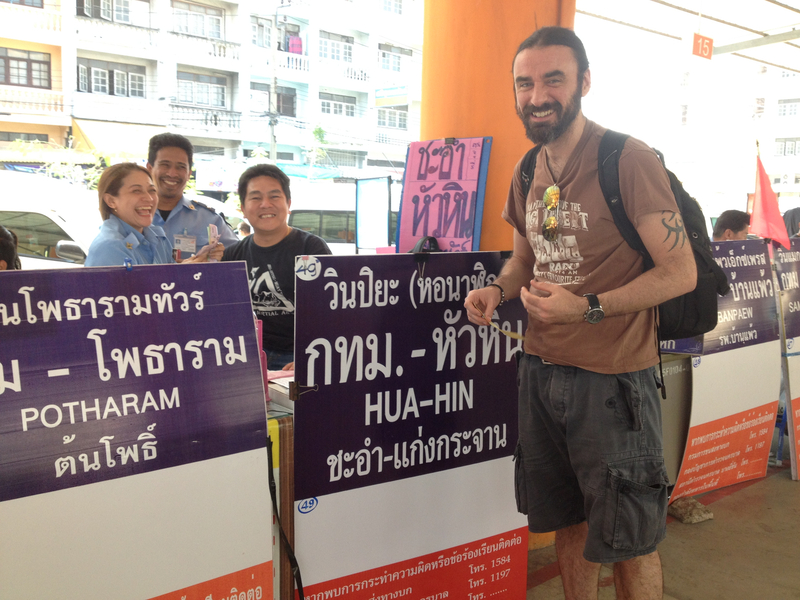 You can also take a big bus or a train to Phetchaburi or Hua Hin and change there.

Kaeng Krachan National Park closes during the rainy season from August to October. Thai ‘winter’ (December and January) is probably the best time to visit, as it’s cool enough for trekking and not too humid.

It costs 300 baht per person to get in, and an extra 30 baht to camp. There used to be rumours that if foreigners took their work permit, they could get it for the reduced Thai price (100 baht) but I heard that they’ve stopped that now. You pay your entry fee at one of the gates into the park.

The campsites have visitors’ centres attached with maps of the various trekking paths and areas of interest. They are staffed by rangers, and generally at least one can speak English. There are four campsites in Kaeng Krachan National Park. The bottom one next to the visitor’s centre has a stunning view over Kaeng Krachan reservoir. The middle one is where we camped, Ban Krang, and then Phanoen Thung is at the top of the mountain. The fourth one is beside Pa Ra U waterfall, in the south of the park, accessed by a different road from Hua Hin. We didn’t visit this area so we can’t comment on it. You can bring your own tent and equipment, or hire one of the branded Thai national parks tents. It costs 225 baht to hire the three man tent, 30 baht each for sleeping bags,  and 20 baht each for mats and pillows. Our tent was already up when we arrived, and we didn’t even have to take it down.

There are several wash blocks with showers, toilets and sinks at each campsite. Despite the number of people, they were relatively clean and fresh when we were there.

During busy times like public holidays, it’s a good idea to book tents or cabins. Thai national parks have a website for reservations.It is in English. We didn’t use it because Samarn booked our tent for us, but it would be interesting to know if it works well.

We spent the first and last night of our trip at Samarn’s Bird Camp, which is just outside the national park. They have various accommodation options, including a campsite. We paid 1,200 baht a night for a double bungalow with en-suite bathroom, TV, and air con. We hired Samarn as a guide and the car for the day, plus to pick us up the next evening, for 4,000 baht. Samarn also picked us up from the national park office where the bus dropped us, and his wife took us the bus station in the town when we left.

Altogether our three night trip, including guides, transport, food and beer, came to less than 10,000 baht. 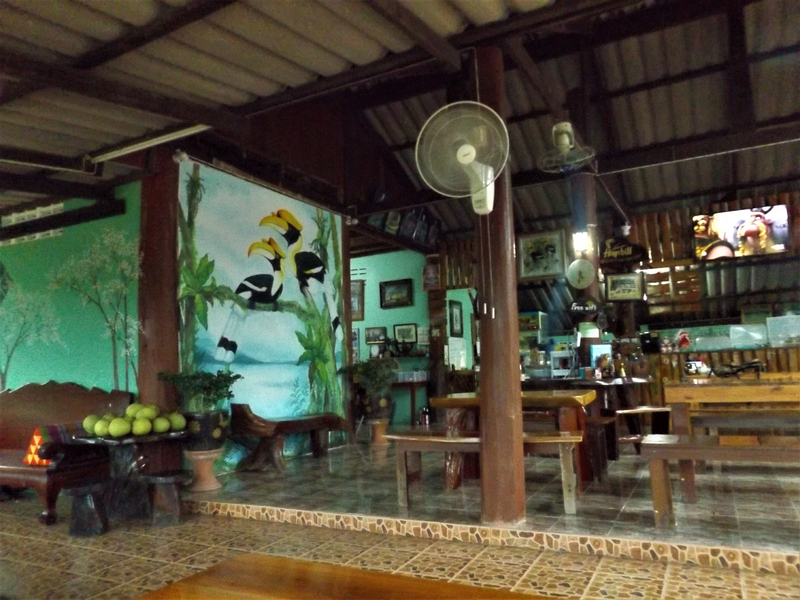 All the Kaeng Krachan National Park campsites have small restaurants serving Thai food. Dishes are cheap (20-40 baht each) and tasty. They also sell a selection of soft drinks, crisps and other snacks. 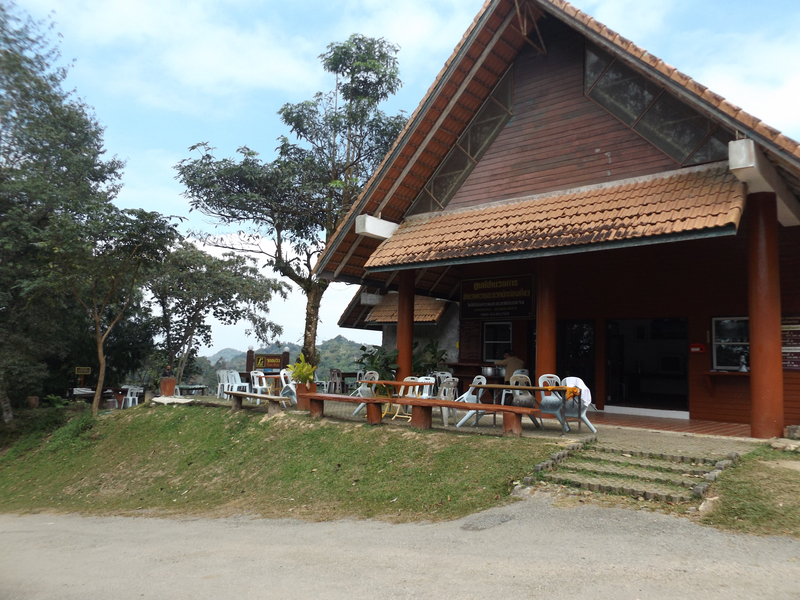 This website is a great resource for all Thai National Parks. It’s our go-to for any trip we’re planning.

Have you been to Kaeng Krachan National Park? Got any more advice for people visiting? Leave us a comment.

Pin this for later 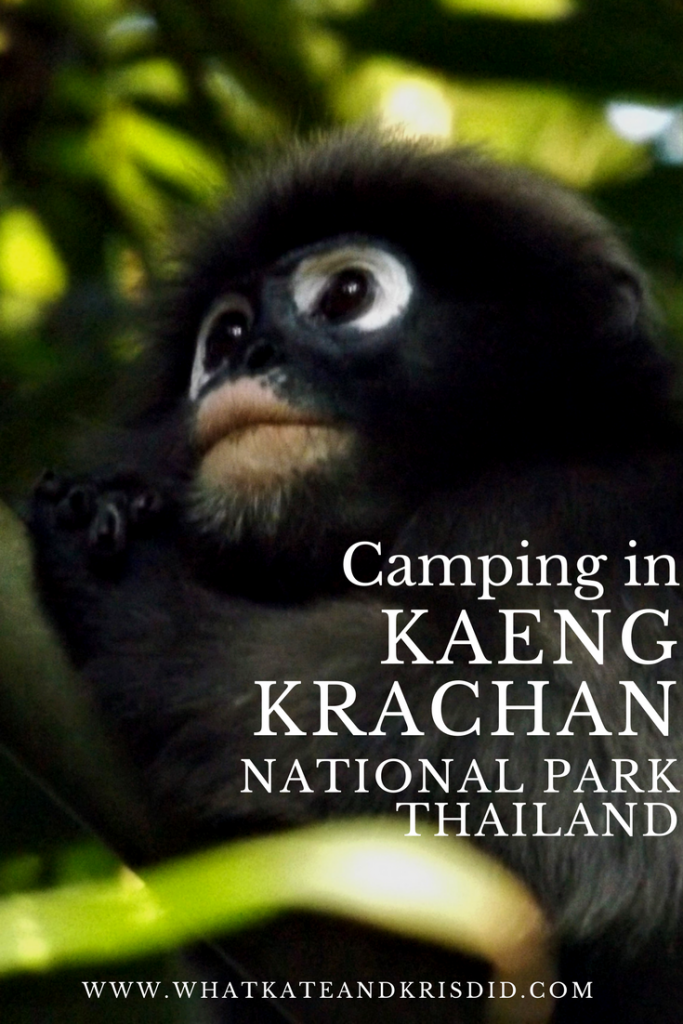