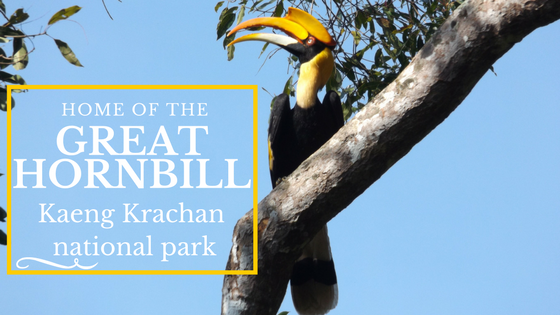 Unlike Khao Yai and Khao Sok, there was not a lot of information online about travelling there. As a birder haven, there were a lot of bird reports, where twitchers had listed birds they’d seen, but there was little about tours and travel. Our usual go-tos of Booking.com and Agoda.com didn’t reveal much suitable accommodation – it was generally all 4-5* boutique places with swimming pools (not the point at all).

What we did find were a lot of birding blogs referring to a place called Samarn’s Bird Camp, which also happened to be top ranking on Tripadvisor. Their website looked to be the sort of thing we were looking for – small and friendly with provided tours, so we sent them an email and his daughter replied helpfully.

Samarn is a Thai birder and photographer. Probably in his 50s, he’s retired and now runs Samarn’s Bird Camp with his wife. His English was just enough to communicate with the help of Google Translate, which didn’t matter because he was an incredibly knowledgeable guide. He knew the park and its birds very well and offered us a program designed specifically for us (as not exactly experts on our feathered friends).

Samarn’s Bird Camp is several brick rooms in blocks of three, looking onto a garden and the mountains of the national park beyond. The rooms are en-suite and have TVs and aircon. You can also camp in the garden. There is a small outdoor eating and sitting area, decorating with pictures and murals of birds, where Samarn’s wife cooks great Thai dishes. The beer is cold and the views are lovely. 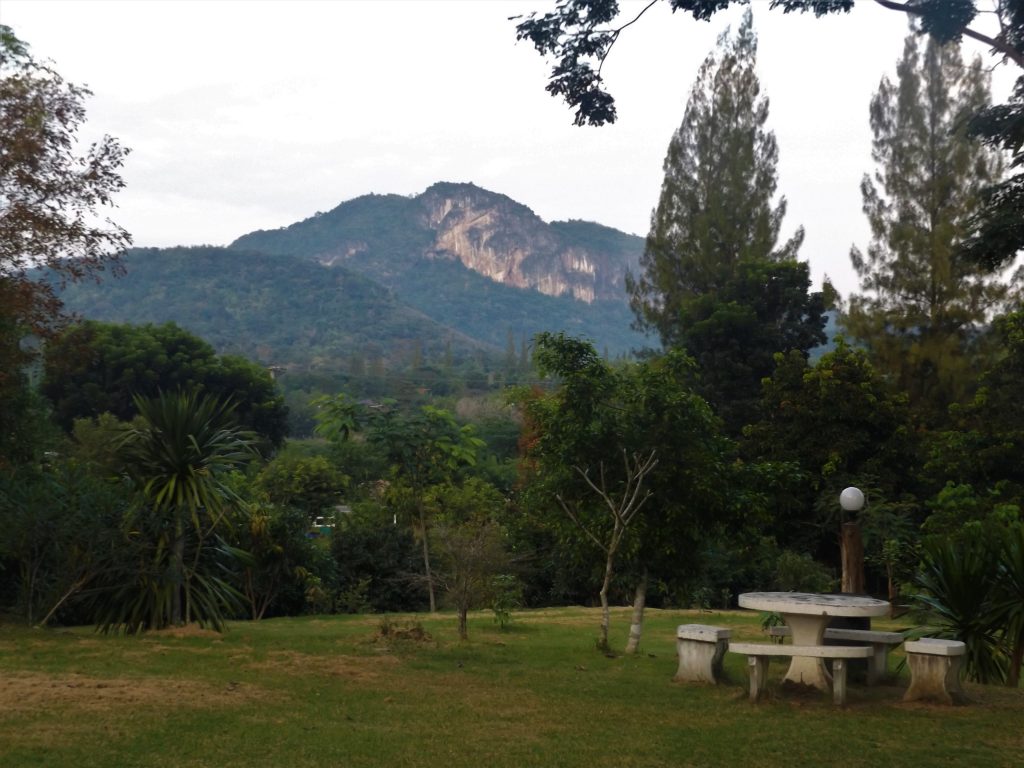 View from the bungalows at Samarn’s Bird Camp

Samarn’s popularity in the birding world was confirmed to us on our last night, when we shared the lodge with the author of the Birds of Thailand guidebook, who was also using Samarn as a guide. 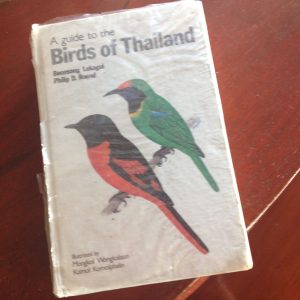 Philip Round, who wrote this book, was also staying at Samarn’s Bird Camp

Kaeng Krachan national park is in Petchaburi province, about 3-4 hours from Bangkok. Rather than go via Petchaburi or Hua Hin, we decided to go directly by minivan. Previously, all minivans went from Victory Monument, not far from our apartment. However, recently they were all moved to various bus stations around the city. Minivans going north moved to Morchit bus station, those going east went to Ekkamai and those going south moved to the Southern bus station.

Or so we were led to believe.

We got a taxi to the Southern bus station – Sai Tai Mai – on the other side of the river.

Once there, we went to the various desks selling minivan tickets for various locations, some written in Roman script, but others completely in Thai.

Perhaps it was our pronunciation so we changed the way we said it.

Blank faces and muttering in Thai.

They took us to the information desk where we wrote it down.

Still nothing. They passed it around from person to person and frowned at it. We began to think it didn’t exist. Some kind of elaborate internet hoax.

Upstairs at the desks for the big buses, we handed our note around. This time there was a glimmer of recognition.

So we jumped into another taxi to take us the 5km to the old southern bus station at Pinklao. We recognised it as soon as we arrived as the one we used when we first came to Thailand, ten years ago. Since then, the big buses have moved to Sai Tai Mai, but now minivans to various locations leave from there.

Walking through into the compounds where the tickets are sold is like an episode of the Walking Dead, as people from every booth shout destinations at you with their arms up, beckoning you towards their booth. As if buying a bus ticket is an impulse buy. Do people just turn up there and randomly choose a booth based on who shouts at them the loudest, and then go to that place? Who knows.

We walked around the booths and tried again.

“No….”. We showed them the paper with the name written down.

“Ooooh. Kaeng KracHAN”. They pointed to a booth, number 11, where a smiley woman with great English sold us two minivan tickets direct to Kaeng Krachan national park (however you say it) for 250 baht. At last.

Minivans don’t have the best reputation in Thailand. They are involved in a lot of accidents so we avoid them where possible. This one drove safely, was comfortable and dropped us at the visitors’ centre for the national park. Samarn picked us up and took us to the Bird Lodge for the night.

Lesson learned – take the place you are going written down in Thai.

The next morning we were up at 5 am for breakfast. Birds get up early it seems and we needed to be in the national park as the sun came up. We had booked Samarn for the full day to take us on a tour of the national park in his four wheeled drive (necessary for reasons we’ll go into later). He was then to leave us to camp overnight in one of the campsites, and pick us up the next evening.

Kaeng Krachan national park has one main road heading up a mountain, with three campsites along it, one at the bottom by the main headquarters, overlooking a stunning lake/reservoir, one – Ban Krang, half way up, and the third Phanoen Thung near the top. The part of the road between Ban Krang and Phanoen Thung can only be accessed by four-wheel drive, as it has some rough, steep parts. The narrowness of the road between these campsites also means cars are restricted in when they can go up and down. You can drive up between 5.30am and 7.30am and 1pm and 3pm, and down from 9-10am and 4-5pm.

The Sea of Mists

Along with those early rising birds, the other reason for the early start was to see the Sea of Mists. From the top of the mountain, early in the morning, looking over the valleys below, you can see the water start to evaporate off the forests below as the morning heats up, creating a thick fog which swirls around revealing trees below which then disappear again into the mists. It looks as if you were above the clouds, the sort of view you get from high in an aeroplane. 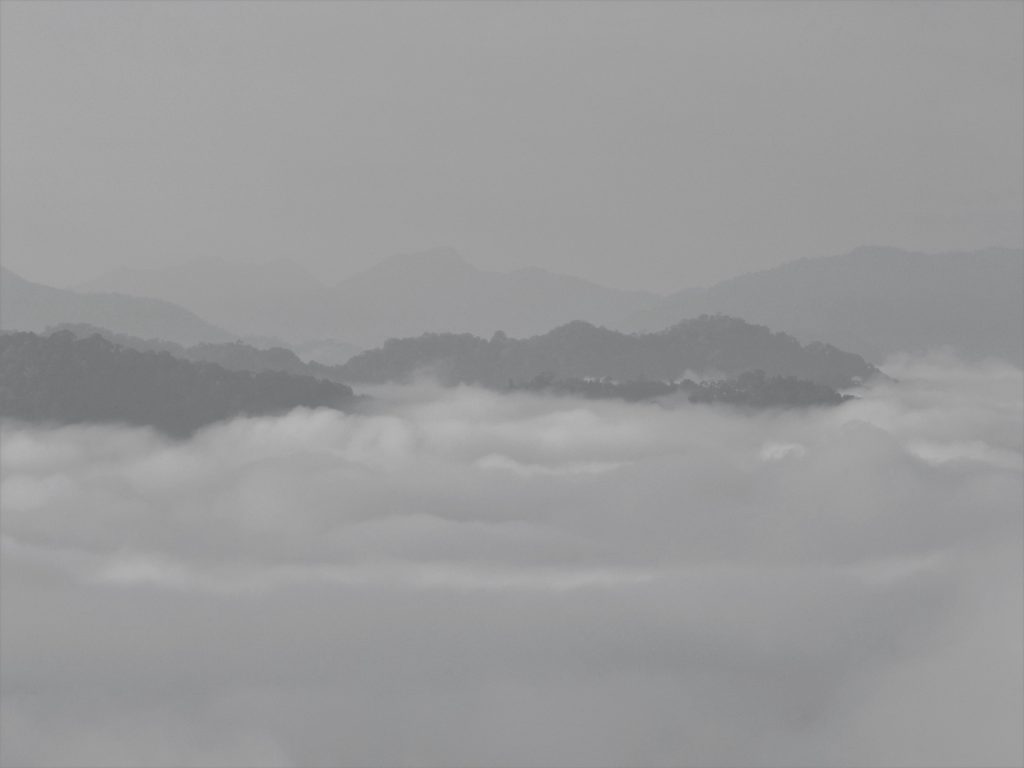 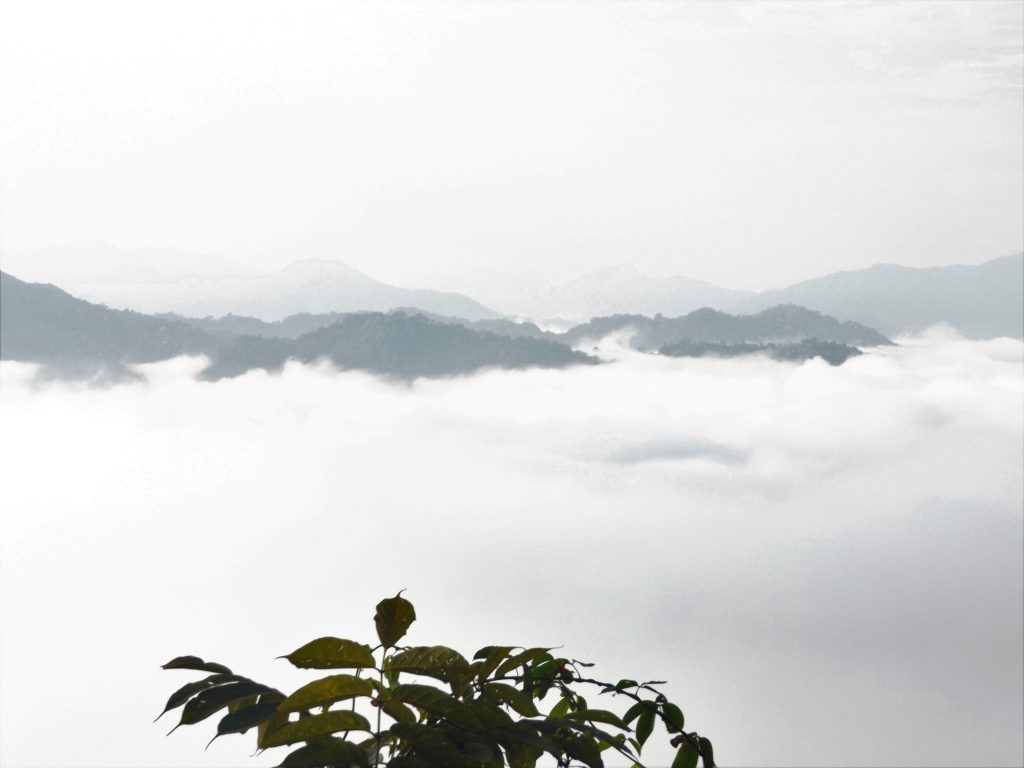 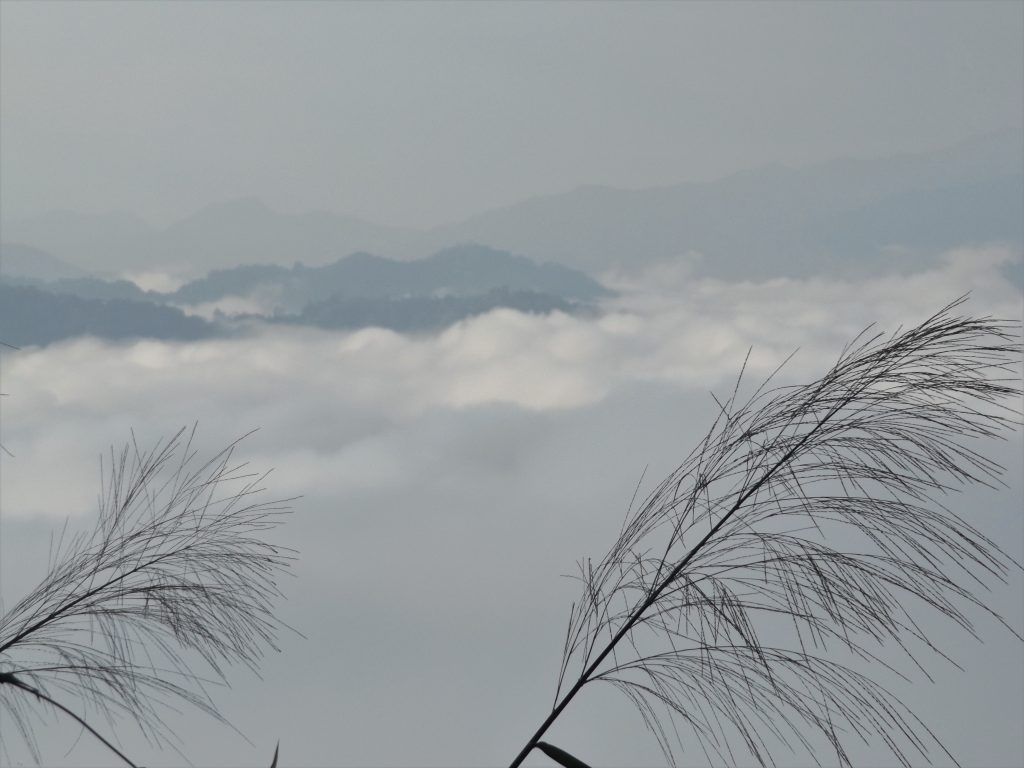 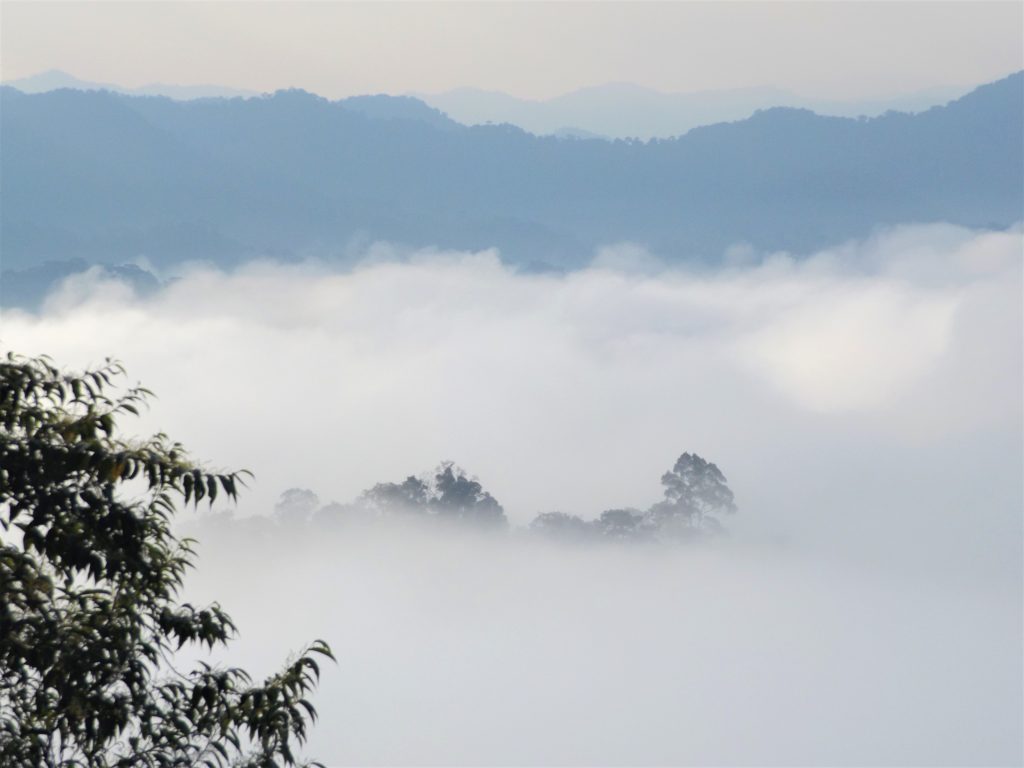 As we watched and the sun continued to rise, the mists faded away to reveal the valleys and forests beneath us. It was spectacular and well-worth the early start. 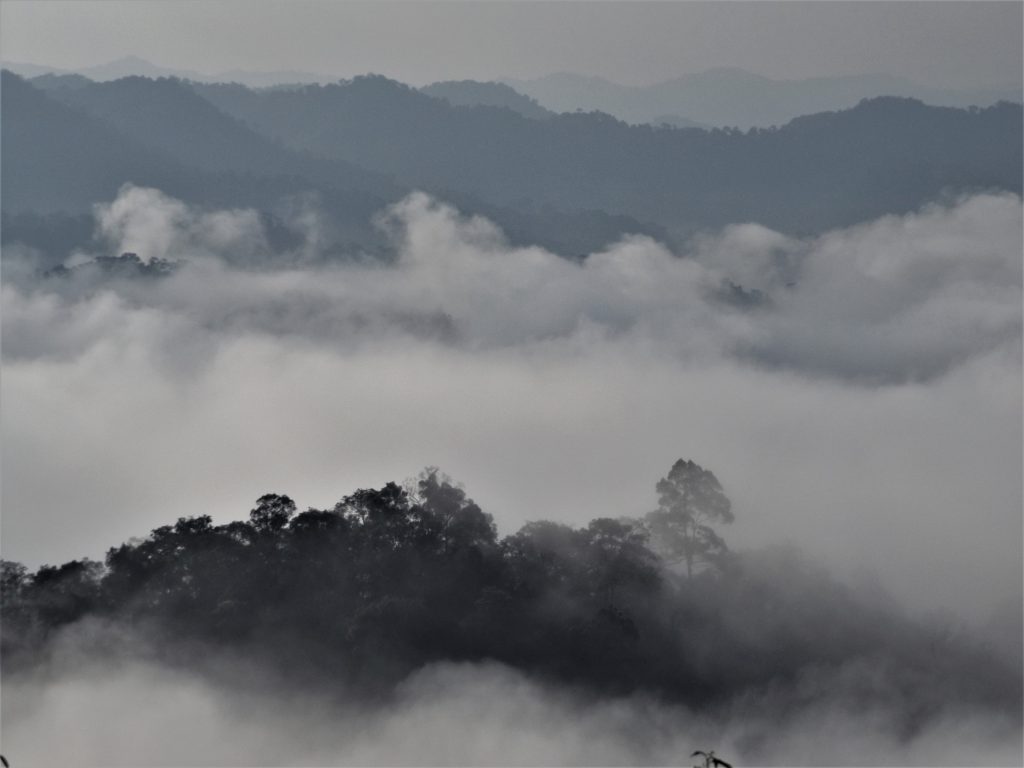 Return of the selfie stick

Joining us on the mountain was a sea of selfies. Every post humanly imaginable was being made in front of the view, alone, in pairs and groups, every kind of shape being formed out of bodies and hand gestures. Isn’t the internet full yet? There must be so, so many selfies on there. One day we are going to run out of space on The Cloud and there won’t be room for the calculations by CERN or cures for cancer.

Once the mists had cleared, we went for a walk on the track towards Tor Thip waterfall. We didn’t go all the way along because it is supposed to be steep and slippy at the end. We did walk through the bamboo forests, almost foggy in the morning sunlight. It looked almost prehistoric. 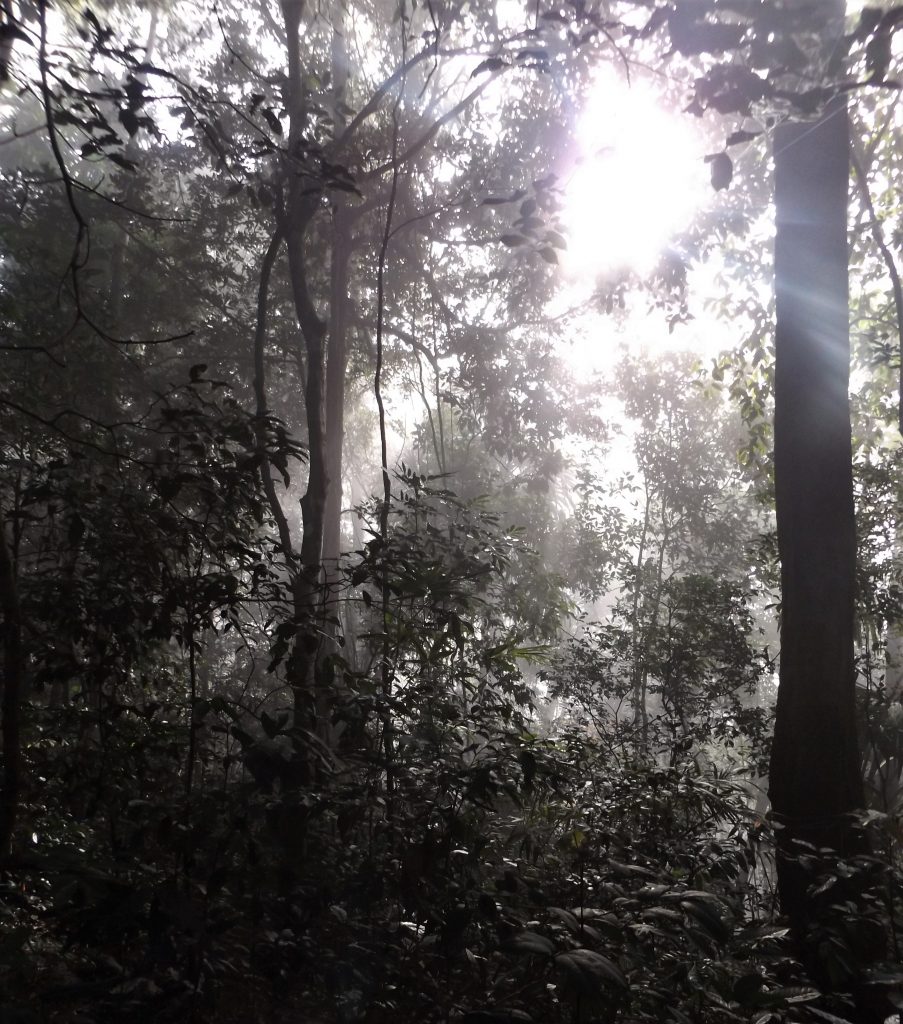 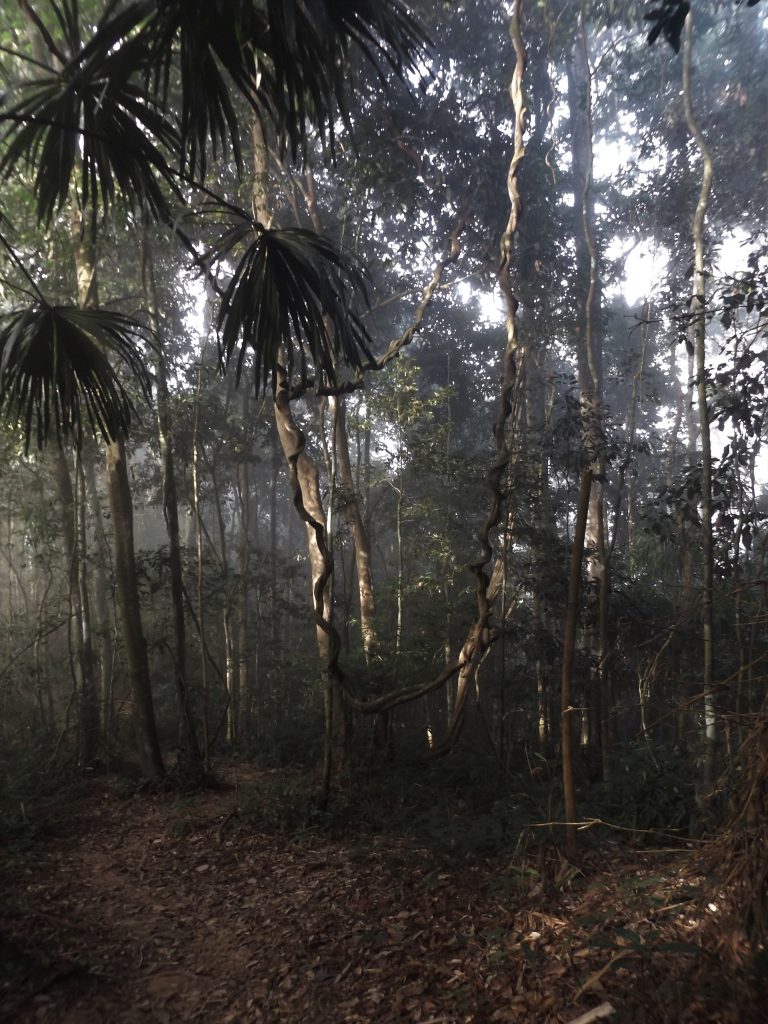 Samarn then lead us off to a seemingly uninteresting stretch of road overlooking the forest, where he took out some small camping chairs and made some coffee on a small camping stove. Suddenly we heard a loud “woom woom woom” noise, like the blades of a helicopter. A huge great hornbill flew into a nearby tree, where it folded its giant black wings in and proceeded to pick berries from the tree. Considering it’s huge and unwieldy looking beak, it managed to pick the tiny purple berries quite delicately. 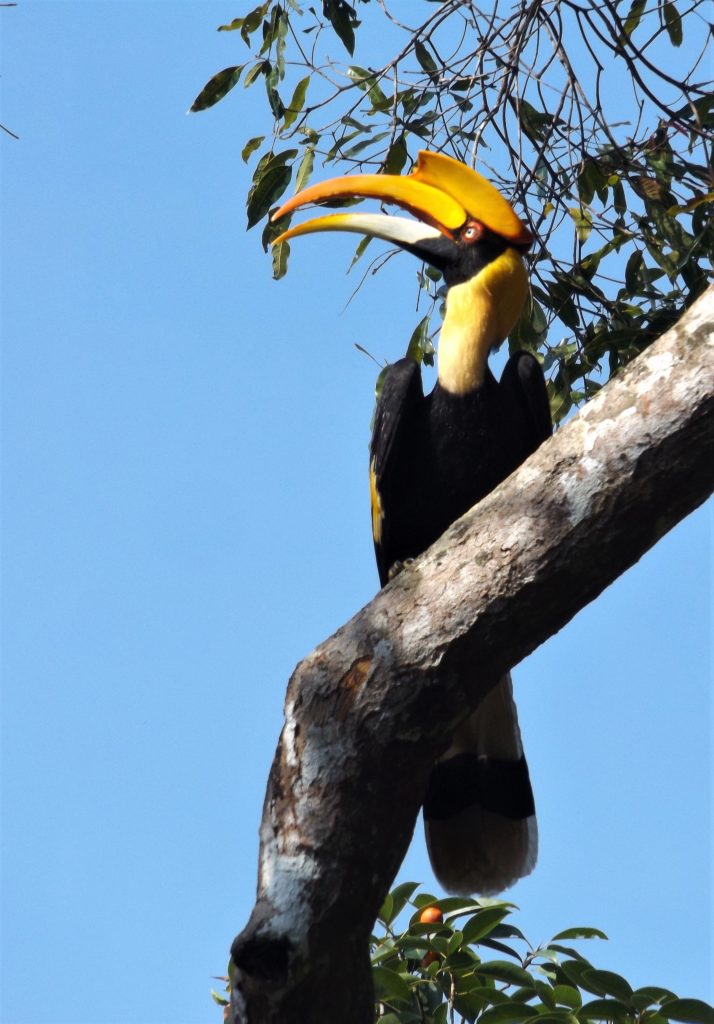 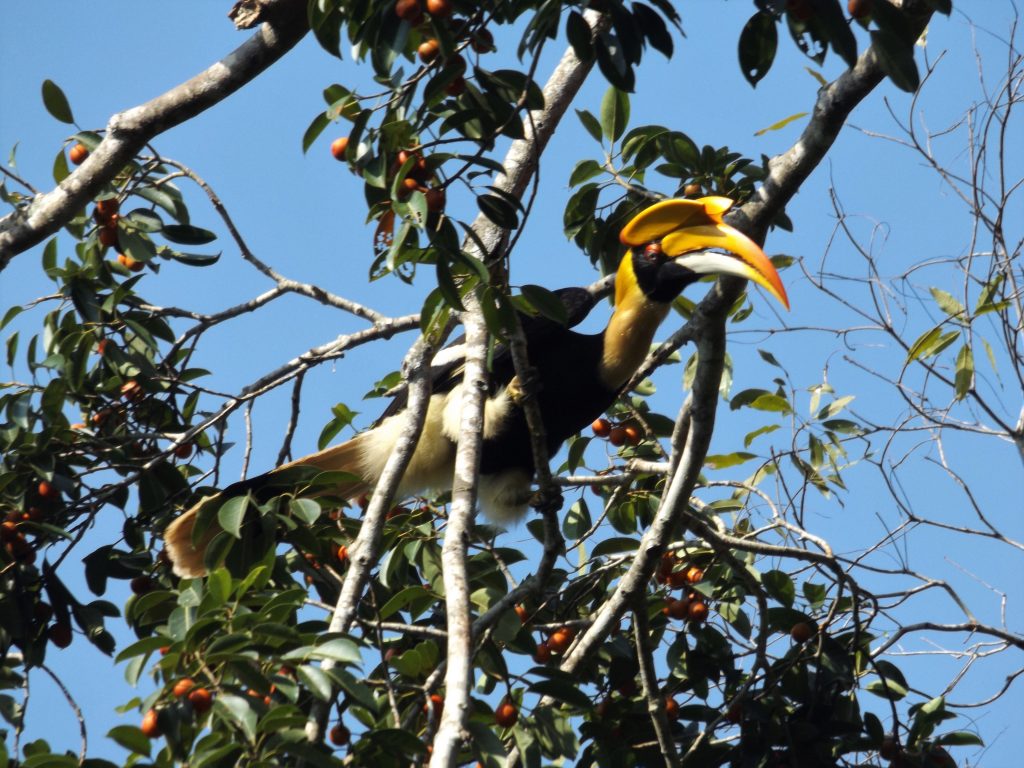 The same loud helicopter sound happened again and another great hornbill arrived at the tree for breakfast. Apparently, they come every day. Then we heard the trees behind us rustling, and several dusky langurs jumped into the trees, again to eat the berries. We sat on our small camping chairs, drinking coffee and watching the langurs eat and play and the hornbills feed, fly off, return and feed again. Meanwhile, Samarn gave me tips on getting a good photo. 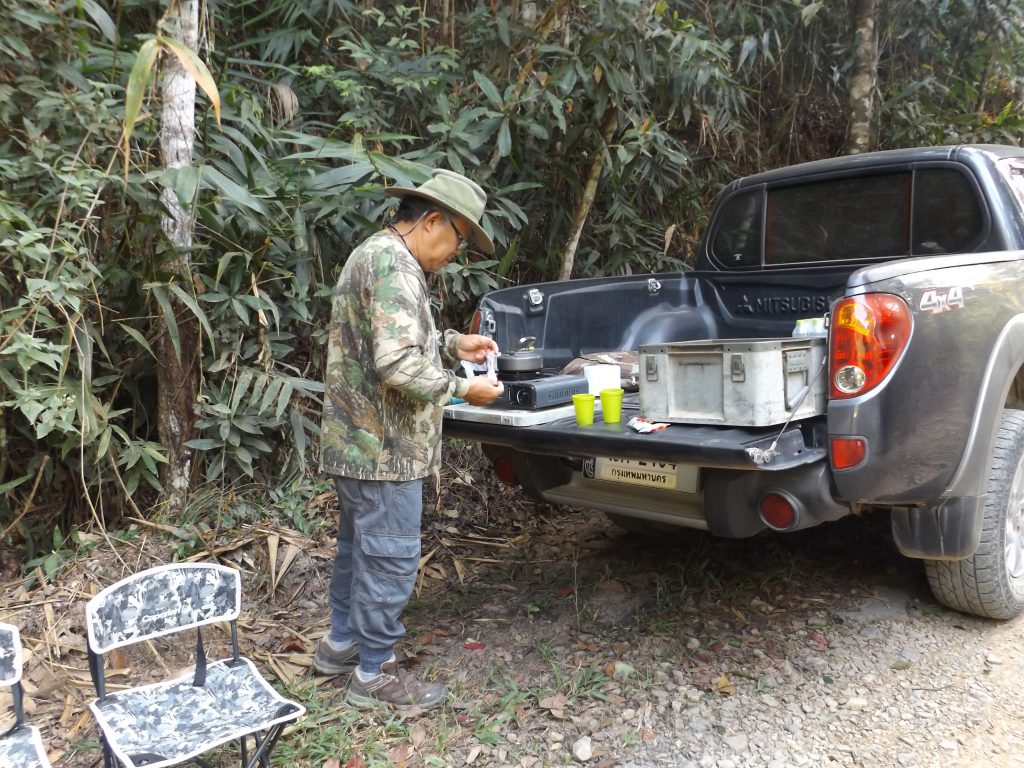 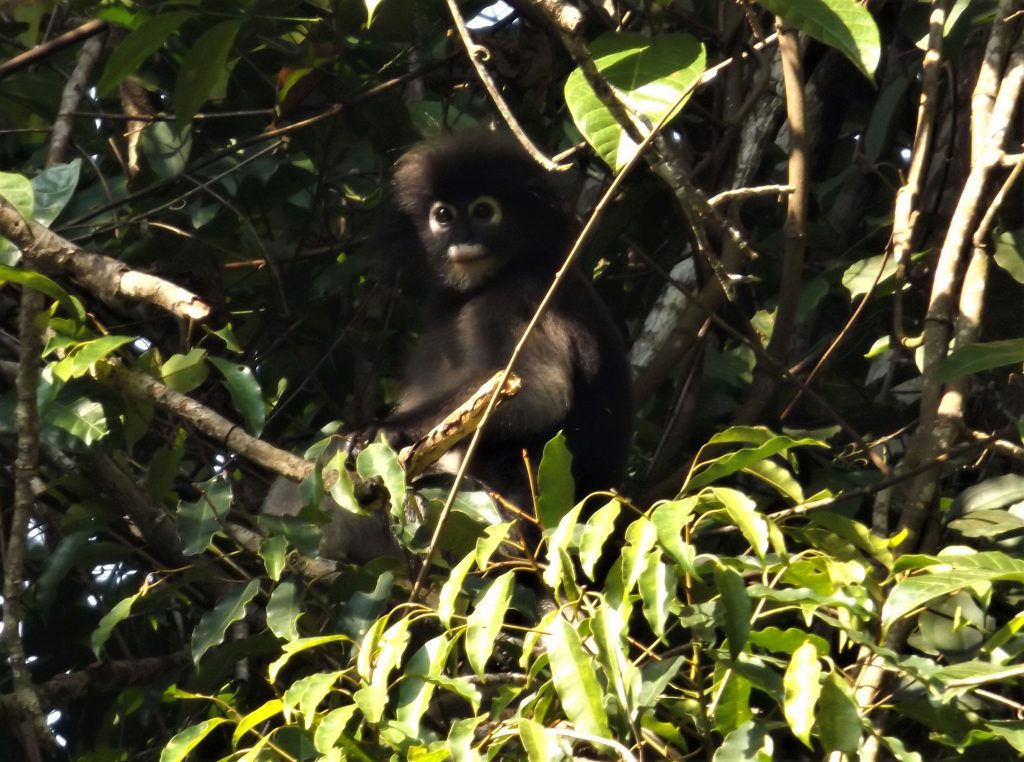 After hornbill and langur breakfast, we headed to Phaneon Thung campsite, where some other Thai birders that Samarn knew had set up telescopes over the valley. We were able to watch some more hornbills through the scope, while some bulbul hopped around the chairs. A knocking sound in the trees alerted Samarn to a piculet, a small species of woodpecker, jumping in the bamboo knocking with its beak. Around the back of the ‘restaurant’, we watched a spidereater feeding. 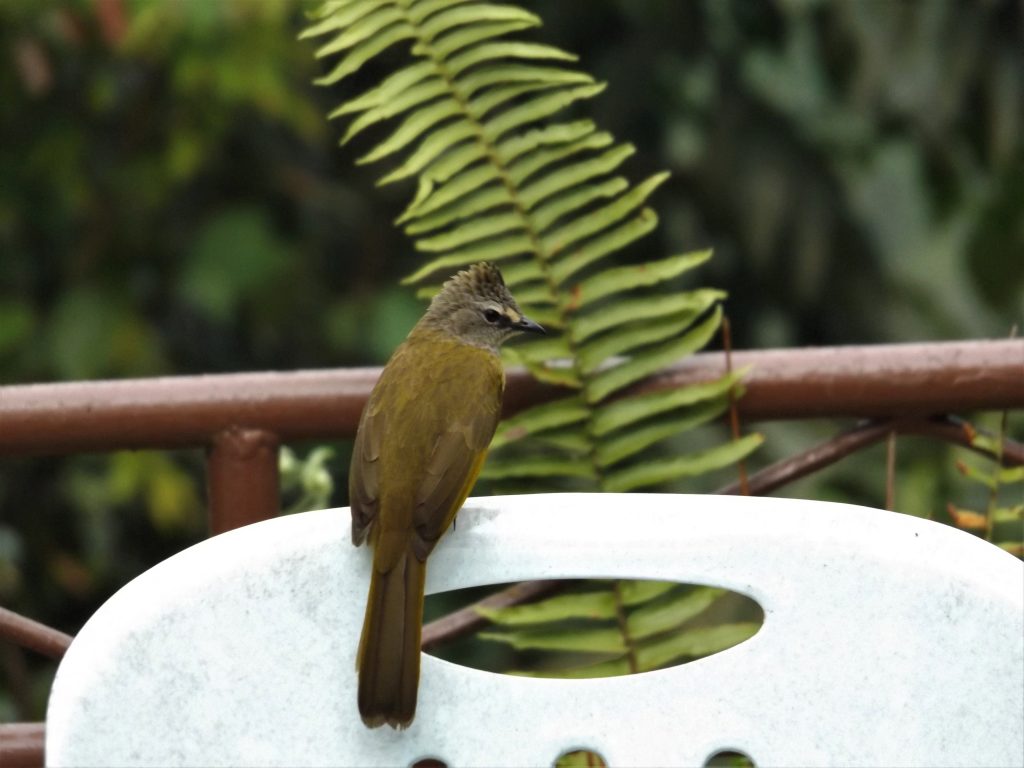 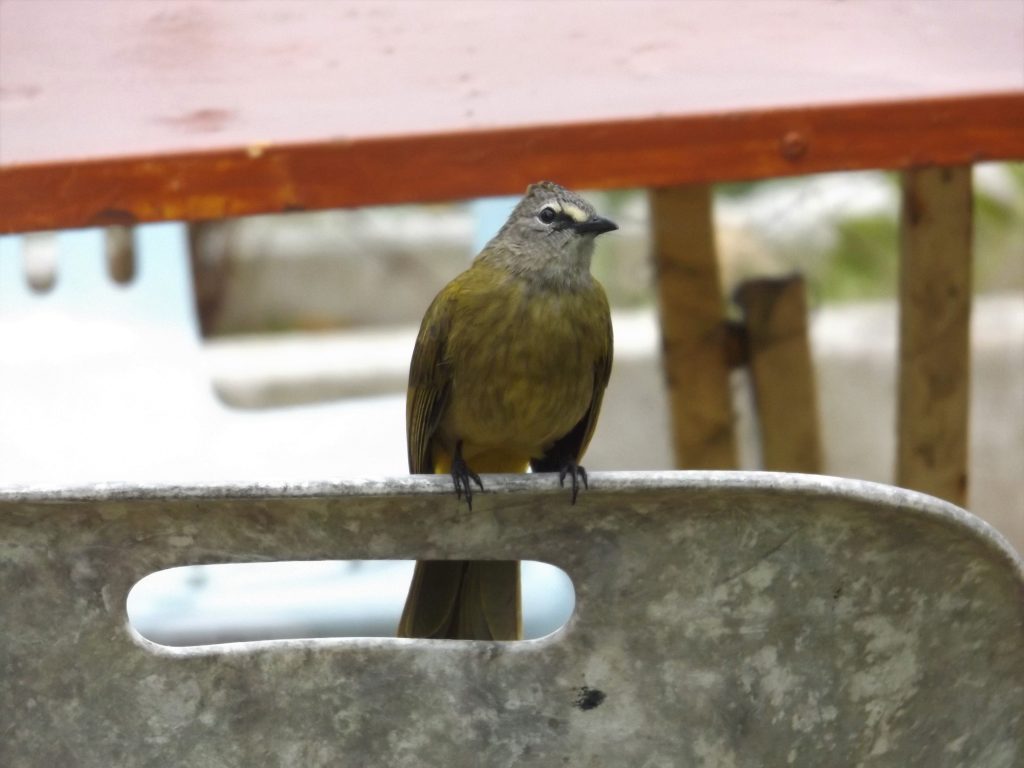 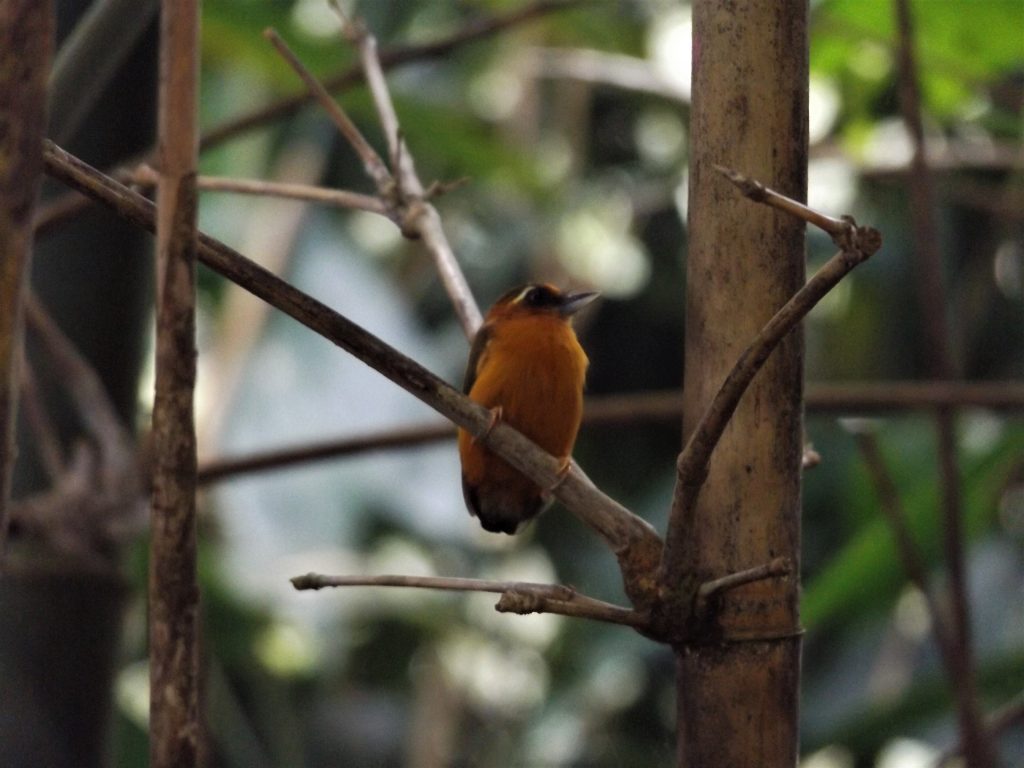 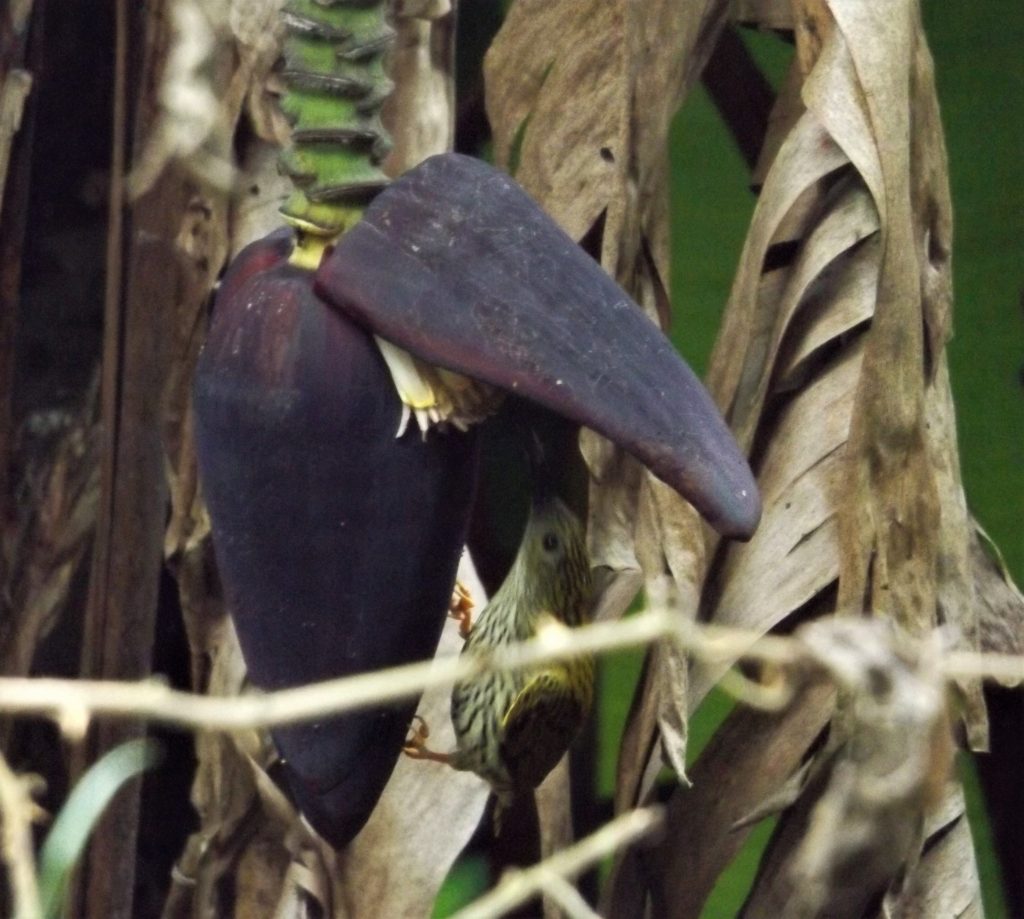 Spidereater feeding from a banana flower

Hiding in a hide, from hiding birds

At our allotted time, we headed back down the mountain to Ban Krang campsite. After lunch at the campsite, Samarn took us down a track beside a stream where he erected two small hides – basically tents far too small to lie in, but big enough for two of us to sit in a peer out of.

We were there to try and spot a banded kingfisher, which usually feeds in the area, or any other birds that happened to be around. We sat there in silence. And sat. And sat. And waited. Noone spoke. It was quite trancelike. And no birds appeared.

Lesson learned – you have to be very patient to be a birder. 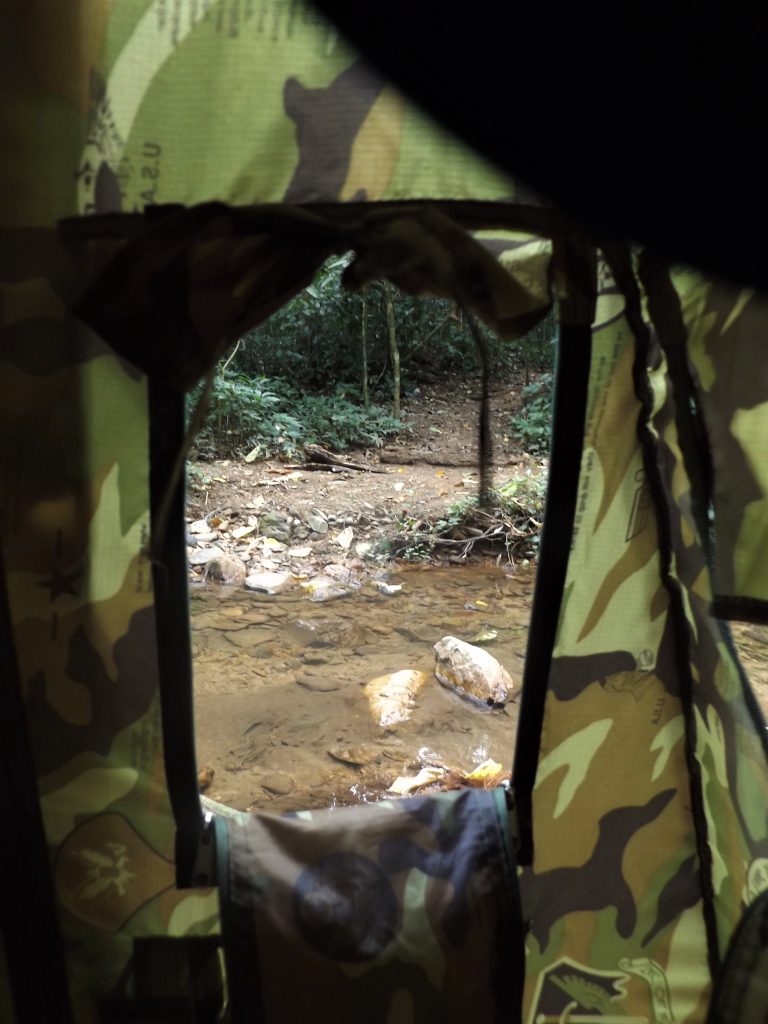 From the hide. Spot any birds? Nope, neither did we. 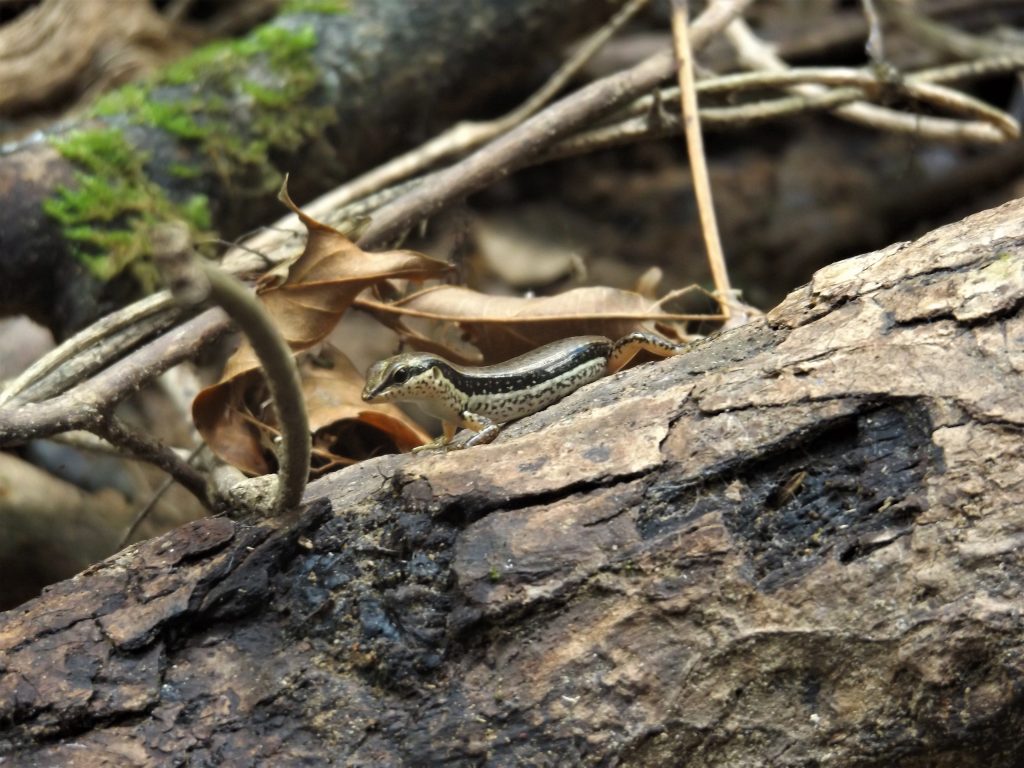 We did spot this handsome dude and watched him for a while. Not sure we needed the tent to watch a lizard though.

However, back beside the road, we found a tree full of birds – bulbul, fairy bluebirds, and chestnut headed beeaters. A group of Thai birders from children to adults were also there and kindly showed us what we were looking at in their guidebooks while practising their English. 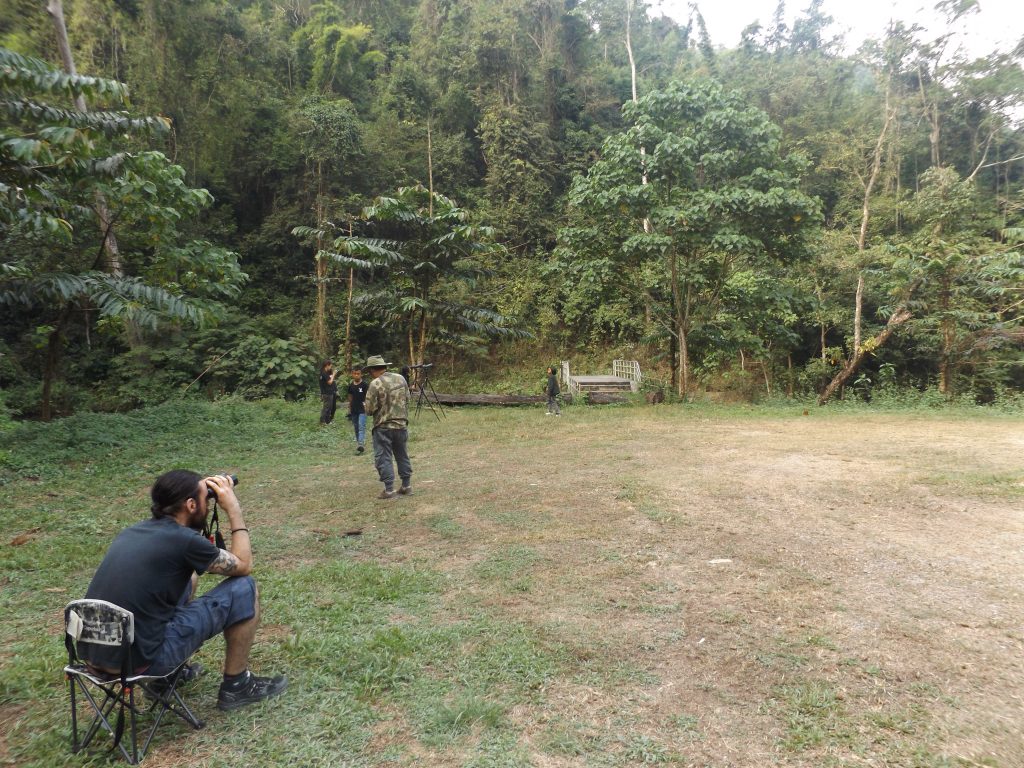 As the sun started to get low in the sky, we headed back to Ban Krang campsite, where Samarn left us to spend the night. Ah, a night out in the wilds, listening to the sounds of the jungle as we drifted off to sleep….

…….it wasn’t quite like that. Find out why in the next blog – Camping in Kaeng Krachan national park.

Apologies if we’ve got any of the bird names wrong in this. Feel free to correct us. We’re no experts. 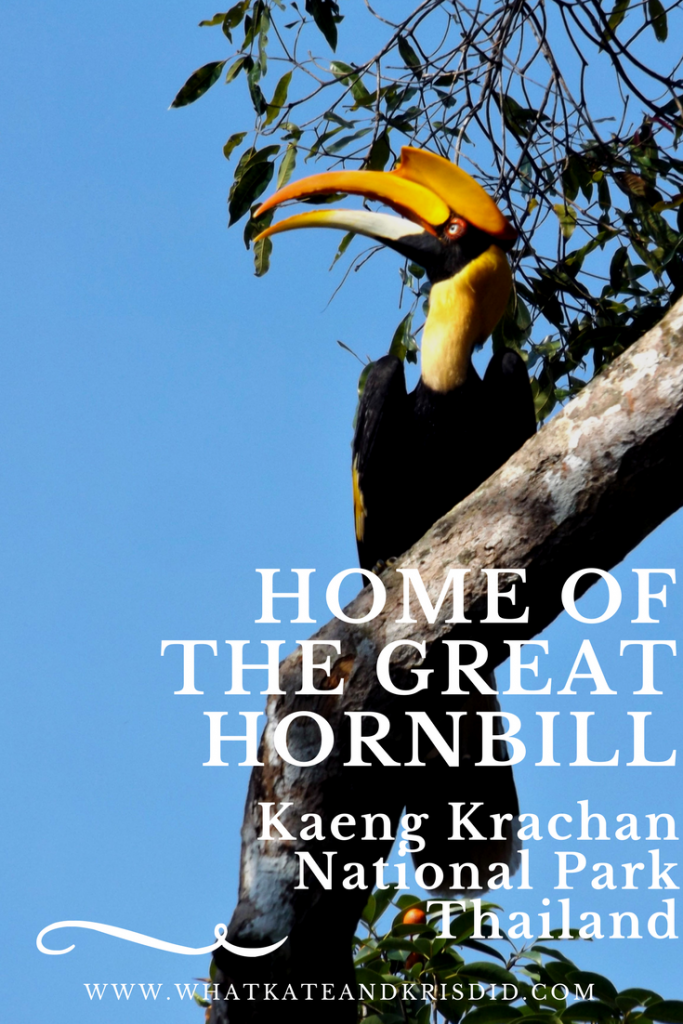