We’d lived and travelled in South East Asia for ten years before we visited Myanmar. During this time, we’d heard so many stories and rumours about travel there, some of which were true, but many of which we found to be wrong, like that there were no ATMs in Myanmar, food in Myanmar was bad and that internal flights in Myanmar were dangerous. We noticed several misconceptions about visiting Myanmar that we’d like to clear up. 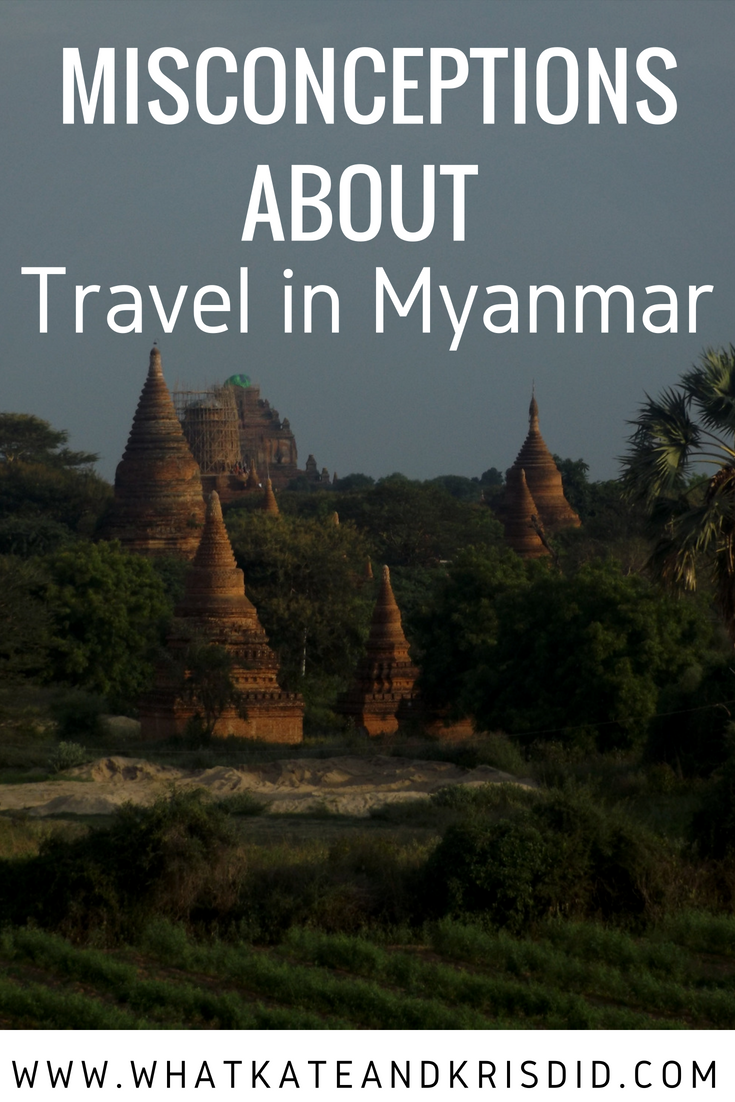 The hotels in Myanmar are poor quality and expensive

This is one of the biggest misconceptions about visiting Myanmar. Previously, when hotels were owned and controlled by the government, this was probably true. However, since Myanmar opened up, far more independent hotels and hostels have appeared. With this competition, you’d assume, the price has been forced down and the quality up.

Indeed, the places we stayed in Myanmar were friendly, clean, comfortable and not at all expensive. Our hotel in Yangon, the Cozy Guesthouse, was the least luxiourious, although it was in the centre of the city, had a clean, modern en-suite bathroom, double bed and working air conditioning. The wifi was not great, but that was a theme throughout the country. There was a rooftop restaurant where we were served breakfast by attentive staff overlooking the city with the Golden roof of the Shwedagon Pagoda in the background. All this for $22 a night.

In Nyuang Shwe and Bagan we stayed in sister hotels, accidentally just because they both had great reviews. The Royal Nyuang Shwe hotel was new and modern with huge rooms, comfortable beds and massive bathrooms. We had air con and cable TV. Breakfast was supposed to be buffet style, but since it was off-peak, we could order whatever we wanted from the menu, as much as we could eat. The receptionists spoke great English and were really helpful, organising our boat trip on Inle Lake and our taxi to and from the airport. This was $28 a night.

The Royal Bagan hotel was the same price for a similar standard of room. This hotel has a pool as well. It has dorms as well as double and single rooms, so there seemed to be more backpackers there. The breakfast was really buffet style, with a mix of western and local dishes. It might seem weird to some, but we love a breakfast of noodle soup or fried rice or noodles. The staff were great again, and rent out electric bikes and share cars to tour the temples.

These sister hotels knew it was Kris’ birthday during our stay in Myanmar and organised him a present of a traditional Burmese harp model. Lovely.

In Mandalay, we stayed in Diamond’s Inn for $25 a night. We had a big room at the front of the hotel with a huge modern bathroom, cable TV and air con. The staff again were amazing and brought fruit to our room every evening. Breakfast was buffet style with a selection of dishes and staff could organise tours and trips.

So we didn’t find any expensive or underwhelming hotels. Perhaps if you are backpacking in Myanmar and have a lower budget, you might. However, we were amazed by the standard and the staff. 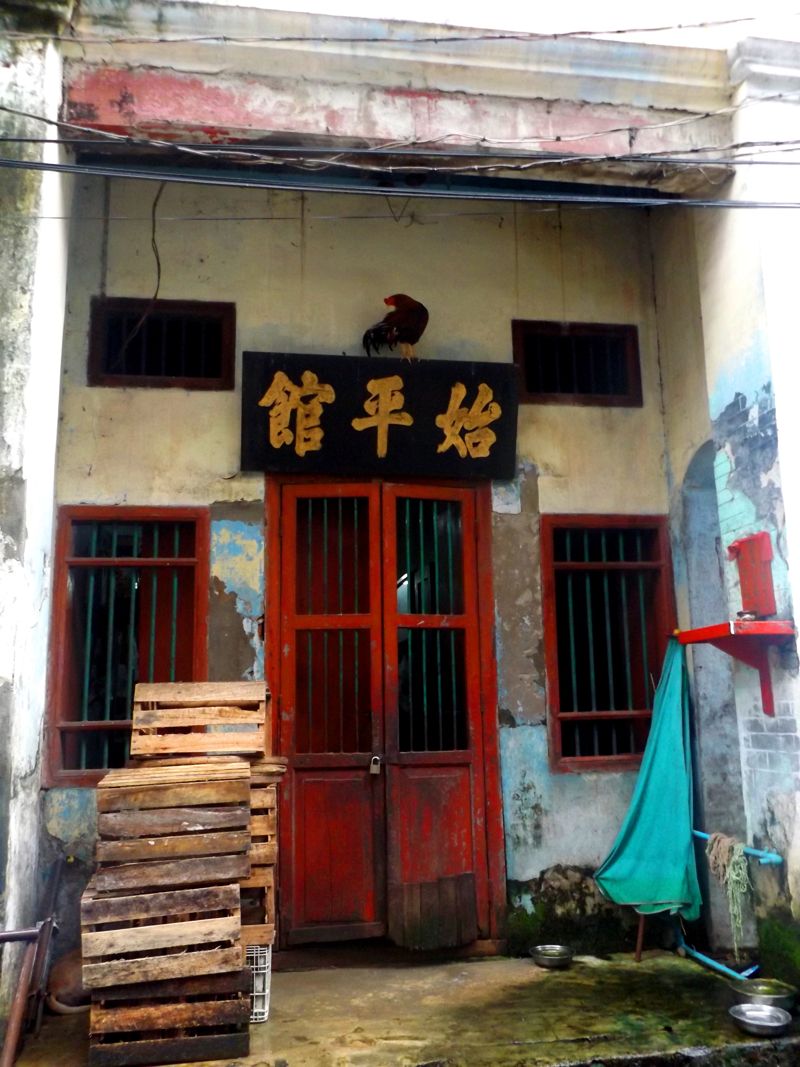 How did he get up there, and can he get down?

Misconceptions about visiting Myanmar 2 – Food in Myanmar is bad and too greasy.

People go on about how amazing Thai food or Vietnamese food is, wax lyrical about the food in Taiwan or on Penang in Malaysia, but when it comes to food in Myanmar, all we heard was ‘it isn’t very good’ and ‘it’s really greasy’.

While we were there, we did a Food Tour of Yangon with Yangon Food Tours, and a cooking class with Bamboo Delight cooking school. You can read more about them in our post on food in Myanmar. We also ate local food for almost every meal, it is was all great. We had fantastic Indian style thalis in Yangon, lots of great bbq in various beer stations, including loads of different kebabs and whole fish, Burmese style curries, noodles and fried rice. 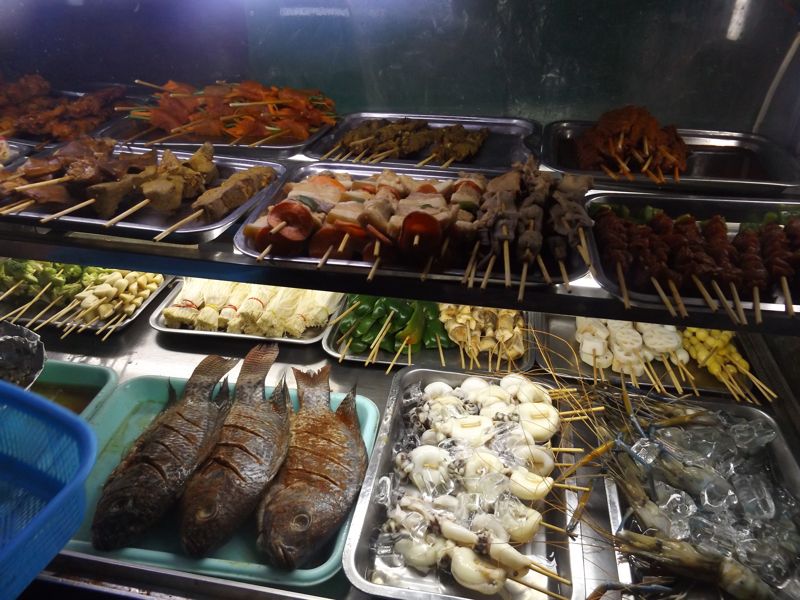 Internal flights in Myanmar are dangerous

We took internal flights in Myanmar between Yangon and Heho for Inle Lake, and then from there to Bagan. There are a lot of private airlines now. We used Myanmar National Airlines and Myanmar Airways International and both were excellent. Heho Airport was interesting as there were no computers used to check you in. We were handed boarding passes with a number written on, but no names and the luggage tags were just tied on. While we were waiting for the flight, there was a power cut too! There were no seat numbers on the Heho to Bagan leg, we just were told to sit anywhere near the front!

However, at no point did we feel that the flights in Myanmar were not safe. They were comfortable with friendly staff and all the safety procedures you’d imagine.

There are no ATMS in Myanmar

This may have been true a few years ago. When we went to Laos for the first time in 2006, there weren’t any ATMs. Now they are everywhere. The same applies for ATMs in Myanmar.

Internet in Myanmar is poor or non-existent

All the hotels we stayed in had wifi. It wasn’t that great, but there is now 3G internet in most popular areas. We bought a simcard from a phone shop in Yangon which came with data package which lasted our whole trip and provided decent enough internet in Myanmar for what we needed.

Travel is hard and slow

We had two quick and easy internal flights with decent airlines, and then took a bus from Bagan to Mandalay that was modern and comfortable. It cost just 9,000 kyat including being dropped off at our hotel in a songthaew.

Don’t just take our word for it, this blog on Solo Backpacking in Myanmar has lots of useful information on travelling between the major attractions.

There are no ‘western’ style bars

Again, this was probably true in the past, but since Myanmar has opened up, so have more western style bars. On 13th street in Yangon we found Basement Bar with a buy-1 get 1 free offer. At 76 Phone Gyi Road there is Arena Sports Bar, which is all you’d imagine a sports bar to be.

In Nyuang Shwe, by Inle Lake, there are lots of cool places to drink. Asiatico Pub and One Owl Grill have good food and cold pints, and Ginki has regular live music. 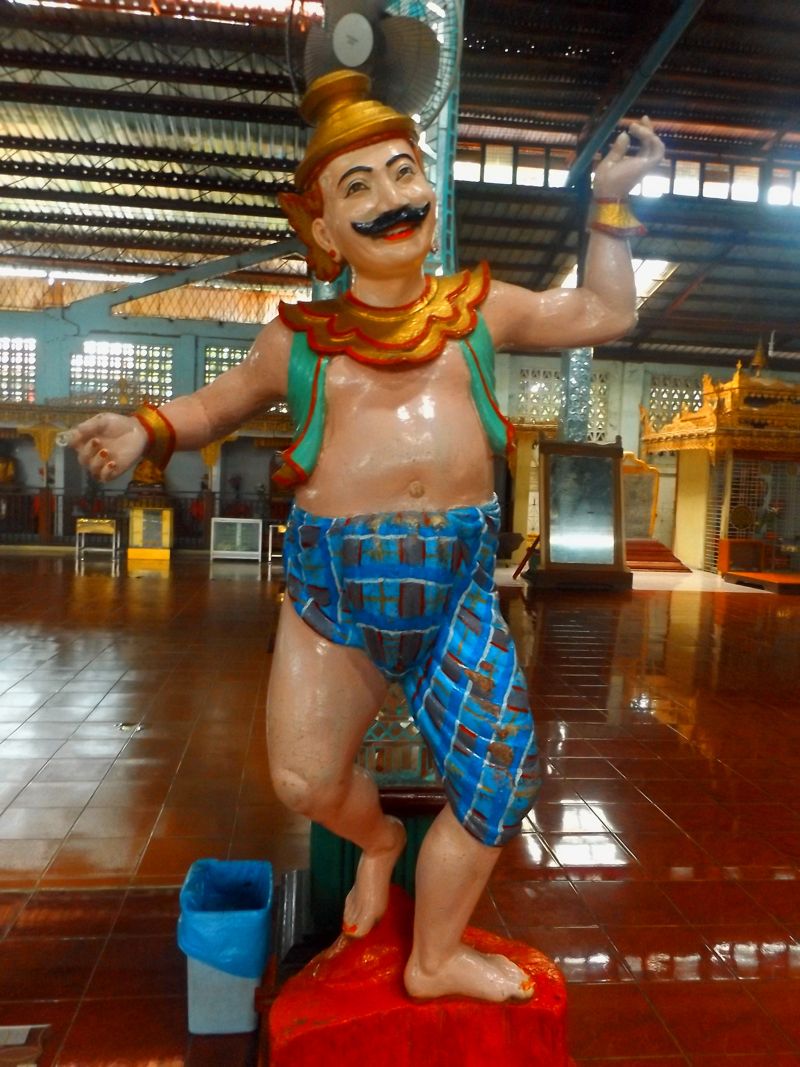 Look at this happy man in Yangon

There is no nightlife after 9pm

On the theme of bars, there are also places open later now too. While many places do shut down pretty early, you can find late night bars. In Yangon, our friend Trent took us to Atrium bar where we stayed watching live music until after midnight.

It’s no good to visit Myanmar in the monsoon

We visited Myanmar in July, which is in the middle of the monsoon. As you’ll see in Kris’ description of Yangon, it was pretty wet when we were there, which resulted in slippy streets and having to buy an umbrella. It didn’t rain continuously though. At Inle Lake there were some rainstorms, but we had dry days as well. In Bagan, it was dry and hot and the same in Mandalay. Myanmar is a big country and it seems the monsoon affects it in very different ways, so it shouldn’t stop you visiting then.

Seriously, we hardly saw any other foreigners until we got to Bagan. Bagan was full of tourists, but we explored Yangon and Mandalay for days and saw very few other tourists. Exploring markets in Bangkok and Saigon usually means you are shouted at and hassled to buy things constantly, but in Myanmar we wandered around, taking pictures and no one noticed. It was refreshing. Our post on searching for Nellie the Elephant in Mandalay tells you more. 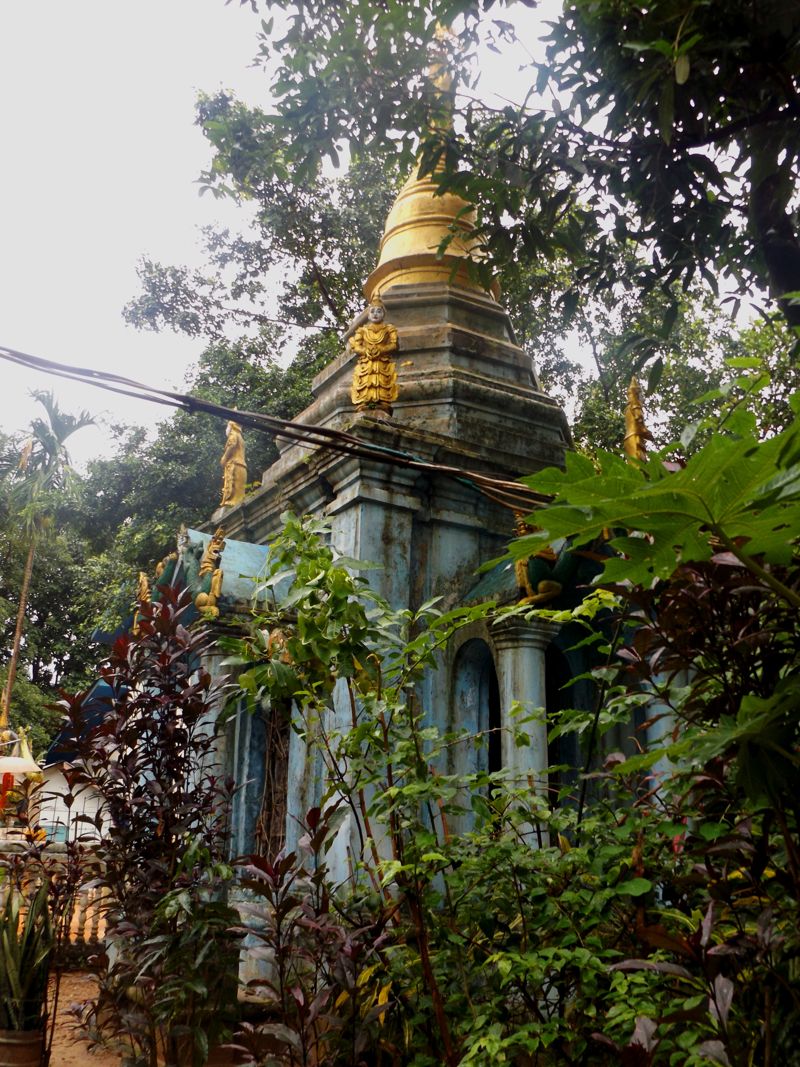 You shouldn’t visit because of military rule

This is obviously a massively controversial question, especially considering what seems to be happening to the Rohingha. For many years, people boycotted Myanmar because of it’s basically a dictatorship with a corrupt government. However, right now, Thailand is also ruled by the military and it’s rarely suggested tourists avoid visiting there. Vietnam is not a democracy and there are many many stories of human rights abuse coming out of it.

I’m not saying that any of this is ok, of course. Visiting the country means that local people get more money, and when people visit, it’s easier to see what is going on. Each person must decide what they feel is best and act accordingly.

So I hope you can see that most of the rumours you hear are misconceptions about visiting Myanmar. We found a beautiful country with lovely people that was easy to travel around and had great hotels and food.

Read more about our trip to Myanmar:

On the trail of Nellie the Elephant in Mandalay

Pin it to your Myanmar board to share with others! 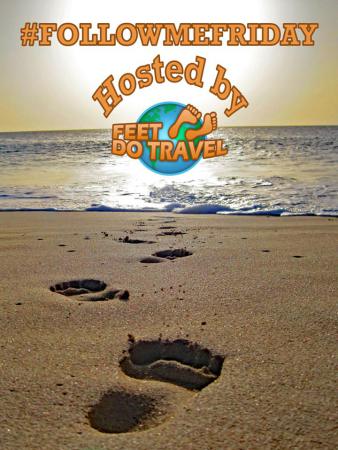