C
Ukraine might not be the place you think of when you think about nightlife, but it perhaps it should be. Unlike what you think, it’s not cold and grey all year, that’s a complete misnomer. There are some great bars in Odessa, including sports bars, a Scottish pub and a couple of Irish pubs in Odessa. Adding to this, nightlife in Odessa, Ukraine also includes an increasing amount of local Odessa craft beer. 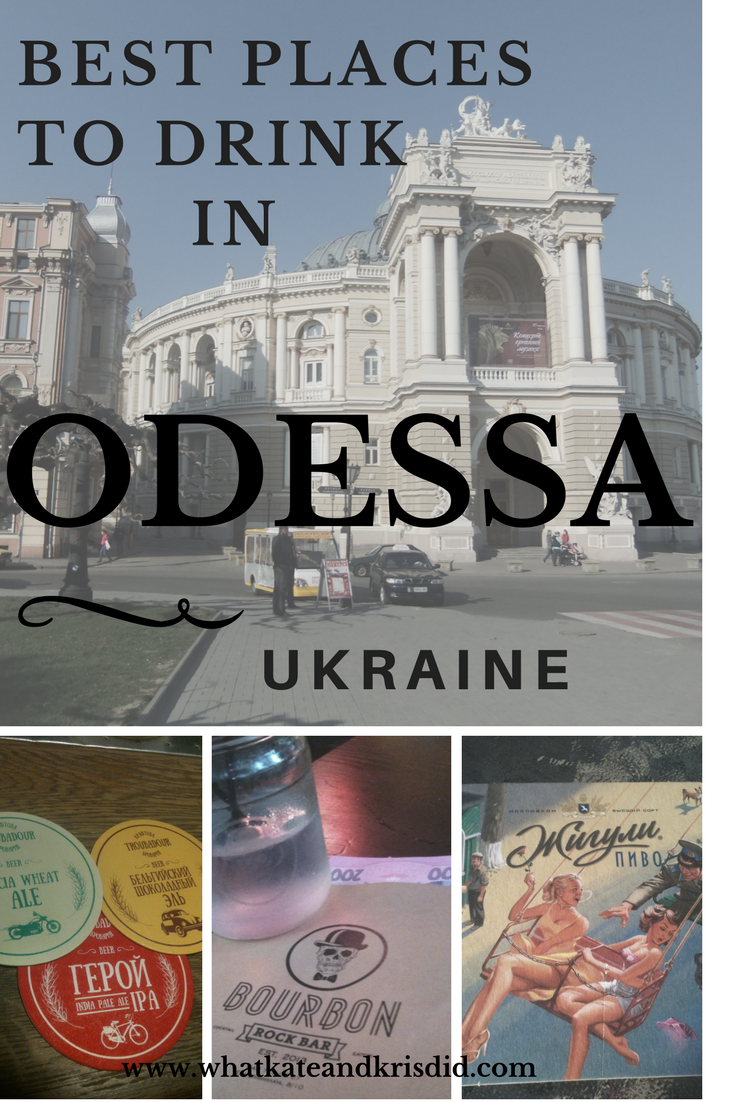 The summer in Odessa is 35-40 degrees with long sunny days. Add to this the incredibly cheap beer (you can get a pint for about 50p to £1), and you have your perfect holiday destination. Odessa is a beach resort where beautiful people go to party and enjoy the nightlife in Odessa in the superclubs of Arkadia.

If that’s not your thing, the main city centre street of Deribasavskaya is pedestrianised and in summer, the restaurants and bars in Odessa spread out into the street and into the park at the end. You can sit outside, enjoying a drink and entertainment from one of the street musicians – be it saxophone, full band or man playing a wine bottle like a violin (no joke).

We lived in Odessa for two years as English teachers at London School of English. There were various things we liked about it, but one was the variety of bars in Odessa. Here’s a round-up of some of our favourite bars in Odessa city centre. 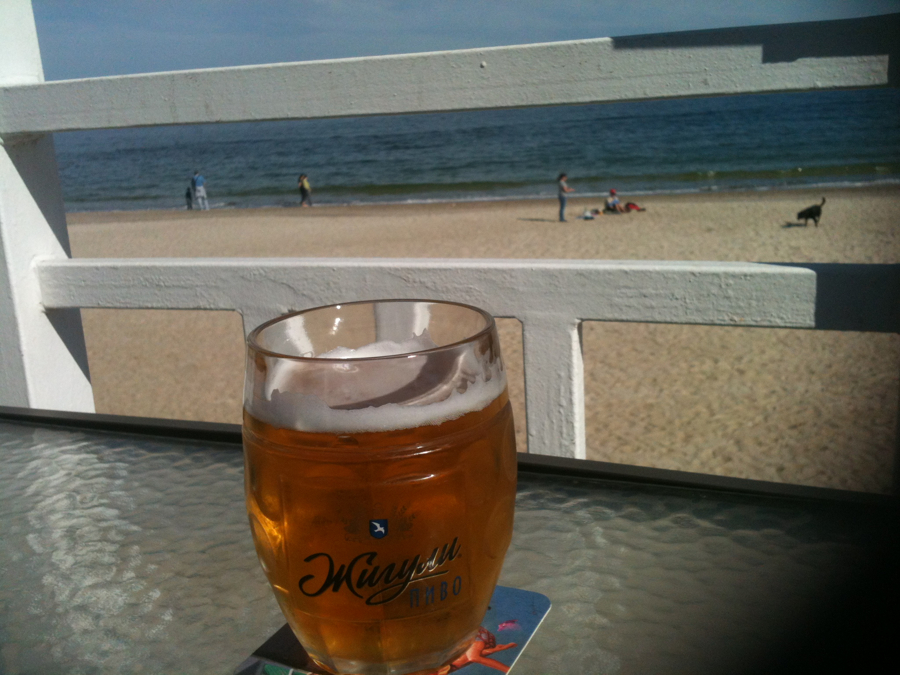 Mick O’Neill’s on Deribasavskaya is infamous with foreigners in Odessa. It’s your typical Irish pub with lots of dark wood and green paint, leather-clad booths, shamrocks and those Guinness pictures with the toucan everywhere. There’s a cavernous downstairs with a big bar you can sit at, and then an upstairs balcony floor with lots of booths. Outside there is a glass conservatory so to keep you warm in winter, and in the summer the pub extends out onto the wide street.

Irish pub in Odessa has big TVs showing various sports, including lots of British football. There’s a range of drinks and a large food menu, and they have lots of events for the likes of Valentines and Halloween. 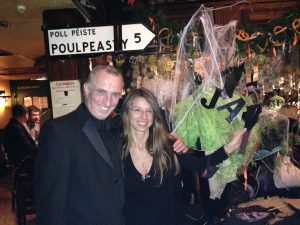 You’re still fixed on that word ‘infamous’ in the first sentence, aren’t you? The Irish pub in Odessa (no one ever uses its actual name) has a reputation for being a bit sleazy. I mean, we are in a city famous for wife hunting and so a lot of that goes on. However, we really didn’t get that impression when we were there. It was a pub with a higher than normal proportion of foreigners, but also a lot of Ukrainians enjoying a meal or night out.

If you have just moved to Odessa, or are visiting, and want to meet some expats or just people who speak English, the Irish pub, Odessa is a good place to start.

There are Irish pubs everywhere, right? But Scottish pubs, they are a bit rarer. Well, outside Scotland anyway. I’m sure there’re loads there. Corvin in Odessa is a Scottish version of an Irish pub. It’s still got dark wood and booths, but instead of green and shamrocks, there is tartan everywhere. 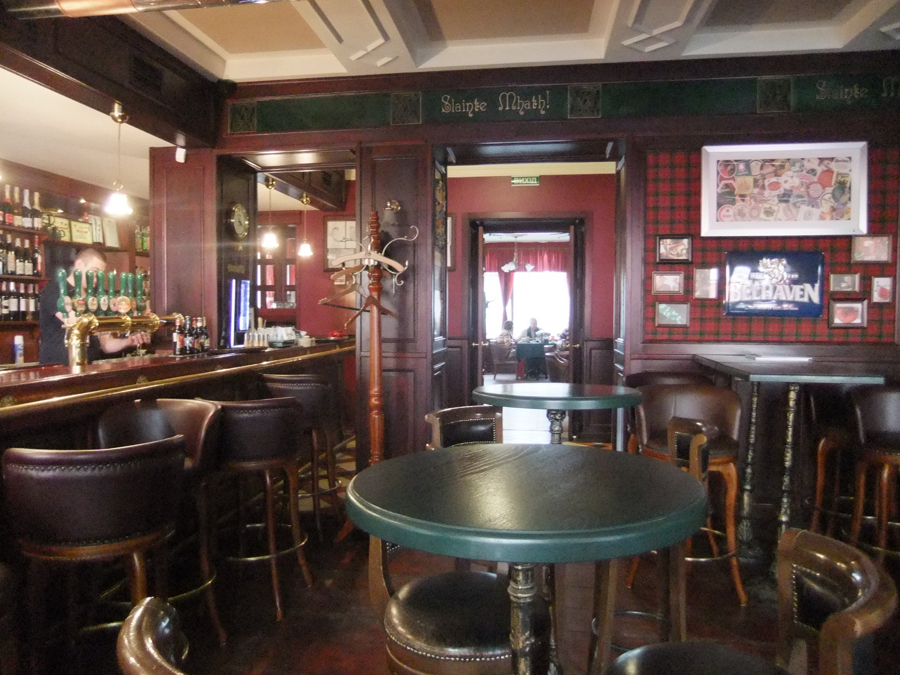 When you come in from the street it looks like a hotel, the stairs leading to various different rooms and bars, plus a balcony for the summer. The staff wear kilts and there is Tennant’s lager and a whisky room with a ridiculous number of whiskeys. They even have a regular tasting evening. There’s also live music. 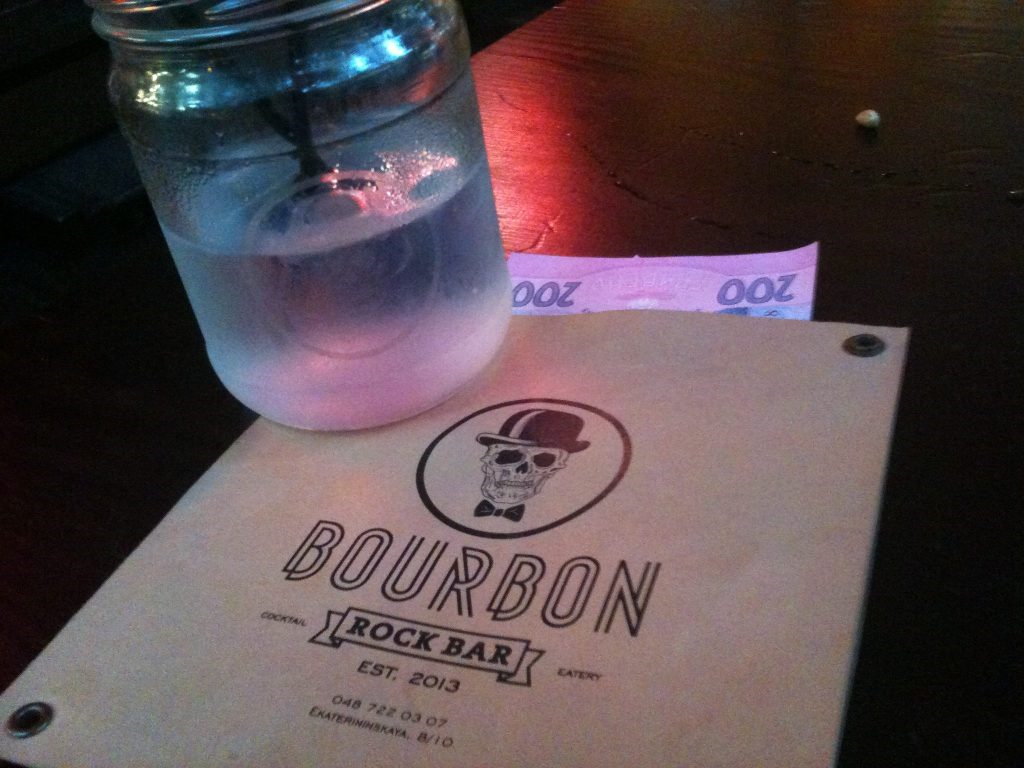 Another interesting of the bars in Odessa is Bourbon. Bourbon styles itself as a rock pub, although if you are wanting leather trousers, big hair and Pantera, you might be a bit disappointed. It’s a narrow pub with a bar along one side, decorated with guitars and skulls in bowler hats. The TV in the corner is usually playing movies but can also be used for Xbox games. There’s even a tattoo studio at the end for you to get your souvenir Odessa anchor tattoo. 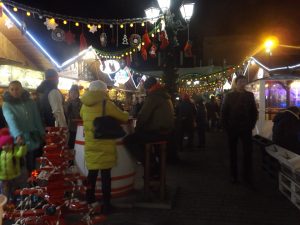 Christmas Market at Christmas. In the summer there are less woolly hats and decorations. People sit out all year round.

It’s only September and my Facebook feed is already full of people getting excited about the traditional German-style Christmas market. Doesn’t every city have one now? Yours probably opens in November. As well as all the bars in Odessa there is a Christmas style market all year round! At the end of Deribasavskaya is a square full of those little wooden hut-style stalls selling food and drinks and handicrafts.

In summer it’s full of people sat out enjoying a cheap beer out of plastic cups. In winter it goes full on Santa with mulled wine and sausages. There’s a range of food from all over the world – Vietnam, China, Georgia, Italy, Mexico……

Some of the wooden huts have knocked together to make bars you can sit inside, which is a relief in the winter. The one we liked best was Texas BBQ, Odessa at the end, where you can sit and watch the Odessans promenade up and down, and generally enjoy seeing the world go by. You can eat a lot of meat there too. Ukraine. Texas. Linked by their love of meat. 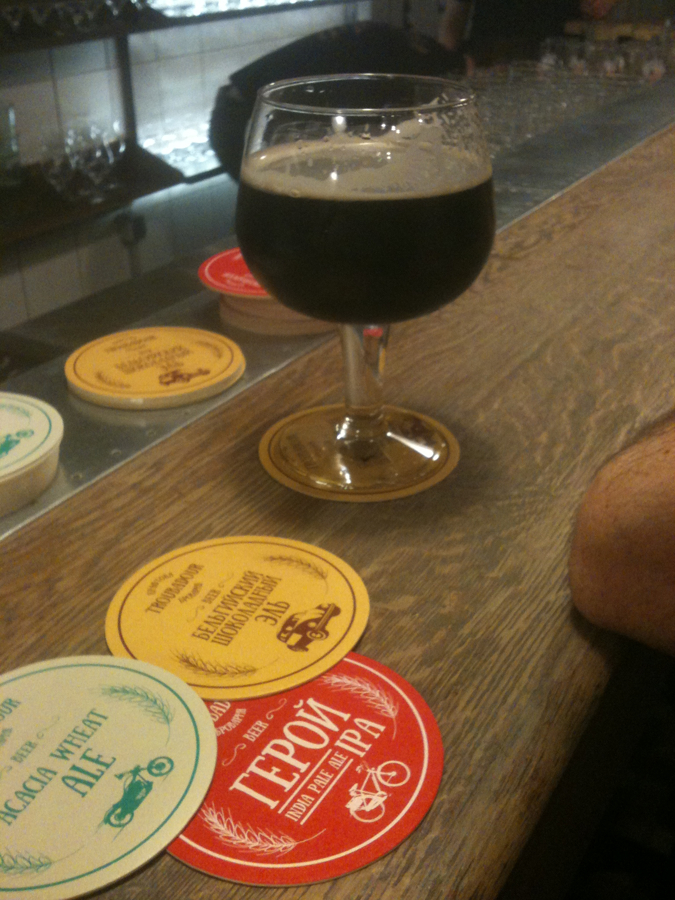 If you find Friends and Beer, or Drusi Pivo in the Lonely Planet it talks about a Soviet-style living room with 1950s decor. However, last year it underwent a transformation. Staff had started brewing their own craft beer. It reopened all white and exposed brick and wood, with pictures of fat sailors everywhere (well Odessa is a port).

Craft Beer in Odessa has really taken off recently, but this was the first real brewery. The blackboards above bar boast an impressive range of their own beers. Be careful. They can be really strong! There’s also a selection of other beers, both local and international, and food. There are lots of board games available to play, for the inner child in you, or for those of you who have run out of things to say to your drinking buddy.

This is the place we were often found, sat at the end of the bar chatting to the very friendly bar staff. Buffalo is a sports bar in Odessa so there is usually sport on the big TVs. In the summer, the bar spills onto the street and during big sports events like the World Cup they put a TV outside. 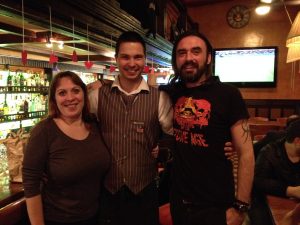 With Yacob, the fab barman in Buffalo. He wins competitions for his Stella pouring skills.

It’s the same company as Beer and Friends, so you can usually get at least one of their craft beers from Odessa on tap, or probably one of the cheapest pints of Stella you will have anywhere in the world. There’s a good range of wine and cocktails and nice food too. 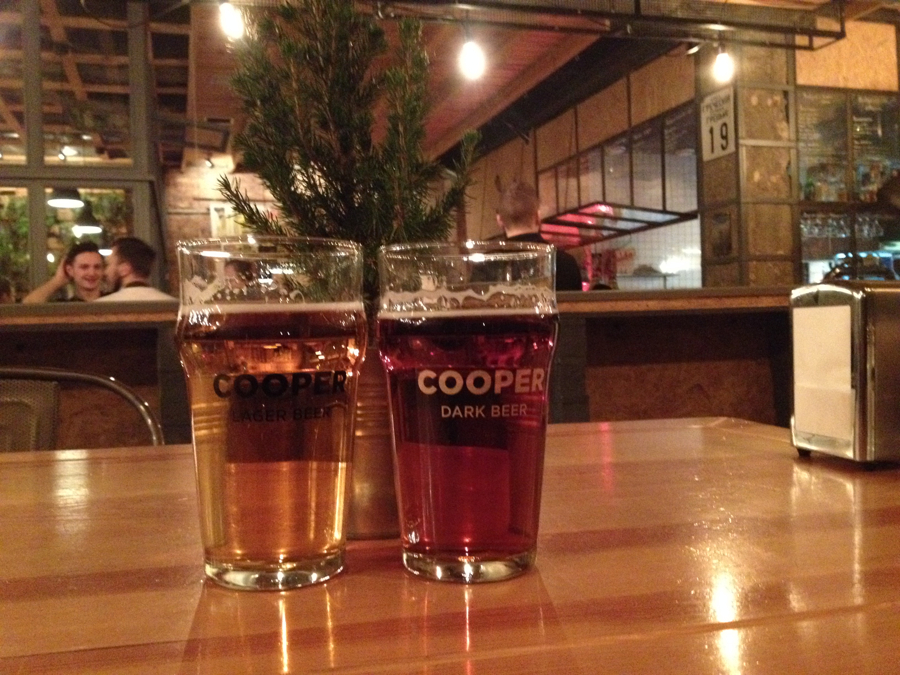 We lived in Ukraine during the hipster revolution, when having a beard and tattoos, playing the guitar and liking craft beers or real ale suddenly gave you a label. Thin jeans, big glasses and twirly moustaches were everywhere. The plus side of this was that some cool bars in Odessa opened up everywhere to cater to them.

Cooper burger started as a burger kiosk, selling the hipster staple diet of homemade burgers and hotdogs with signature buns and relishes. The bar opened selling the same, along with drinks including their own Cooper beer. The bar is all exposed brickwork, signature walls of cork board, cross sections of wood and plants and murals.

Upstairs they opened the Tiki bar – with big squishy sofas and live music that allegedly closes when the last person leaves (we haven’t tried that). 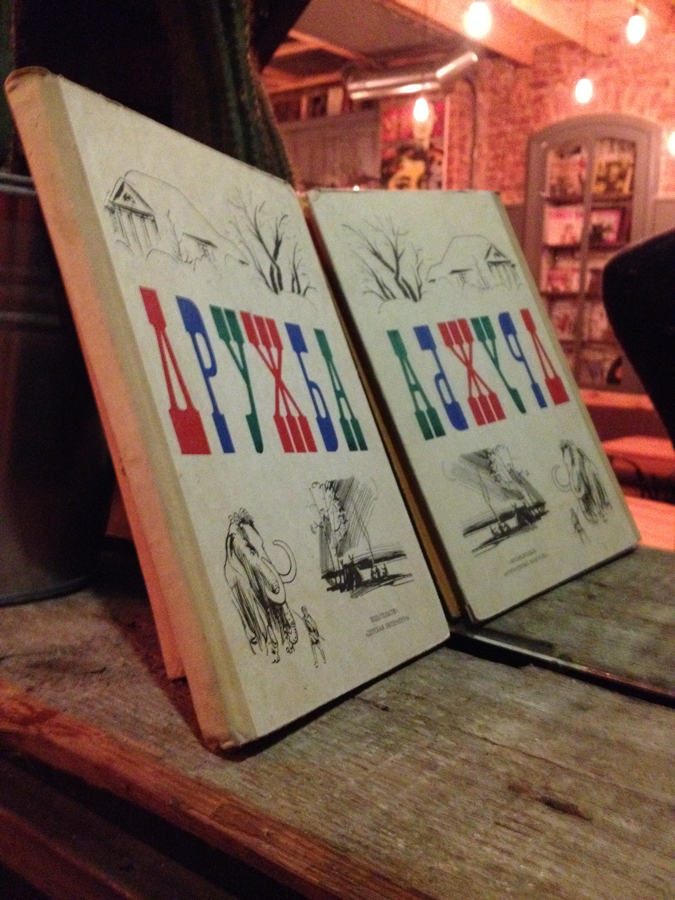 Before the hipsters arrived and craft beer in Odessa exploded in popularity, there were already several places you could get local beer. Gambrinus sells Czech style beers in massive glasses. You find it on Deribasavskaya, the main street, opposite City Garden. The pub is underground – in the winter you wouldn’t know it was there unless you venture down the steps into the cavern-style pub below with long wooden tables and live folk music at the weekends. In the summer, however, it opens a big terrace on the street above. 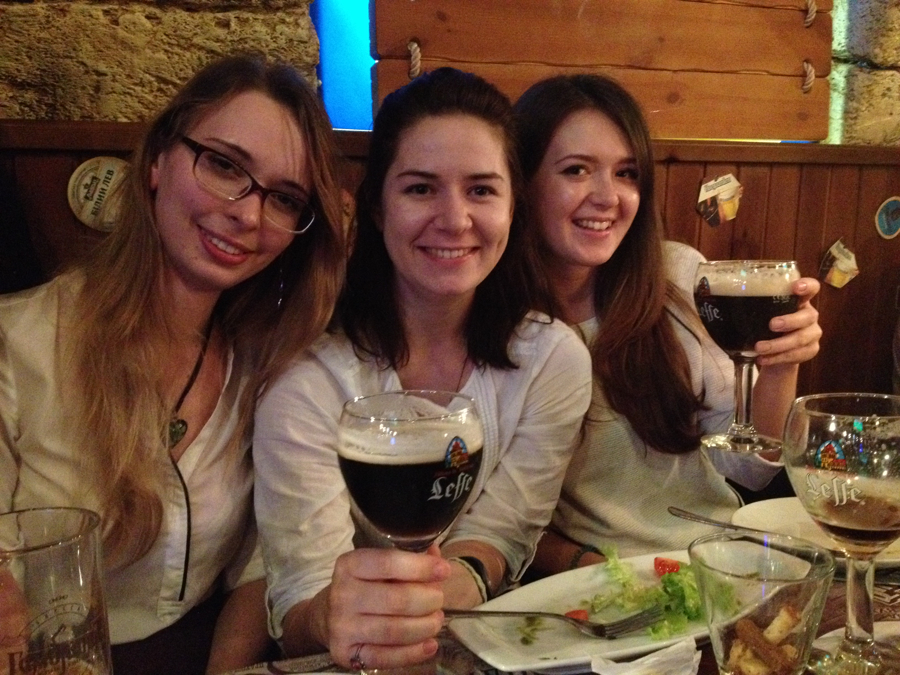 Pivnoy Sad – or Beer Garden I think in Russian, is opposite Gambrinus in City Garden. Its location means that its terrace spreads into the gardens in summer. The pub is again in a Czech/German style with big glasses of local dark beers and big plates of meat and potatoes. It’s a bit more expensive than Gambrinus, but to honest, for Odessa bars, that’s not saying much.

Another type of bar in Odessa, as well as the Czech/German style places and the hipster pubs, Odessa also has a lot of what it calls ‘art pubs’. We had no idea what that meant before we moved there. It seems to be places that are a bit independent and quirky, full of the alternative crowd. Exit was apparently one of the first.

On Bunina Street, close to Ekaterinskaya, it’s almost impossible to find during the day. At night, the only way you know where it is is the crowd of people smoking outside. You go through a door and down some stairs and into an underground bar covered in murals and graffiti. If you venture down, you will be met by some incredibly cheap drinks, even by Odessa’s standards, and one or more live bands.

Just be aware that the toilets are squats and don’t stand or sit near them cos they really can pong. 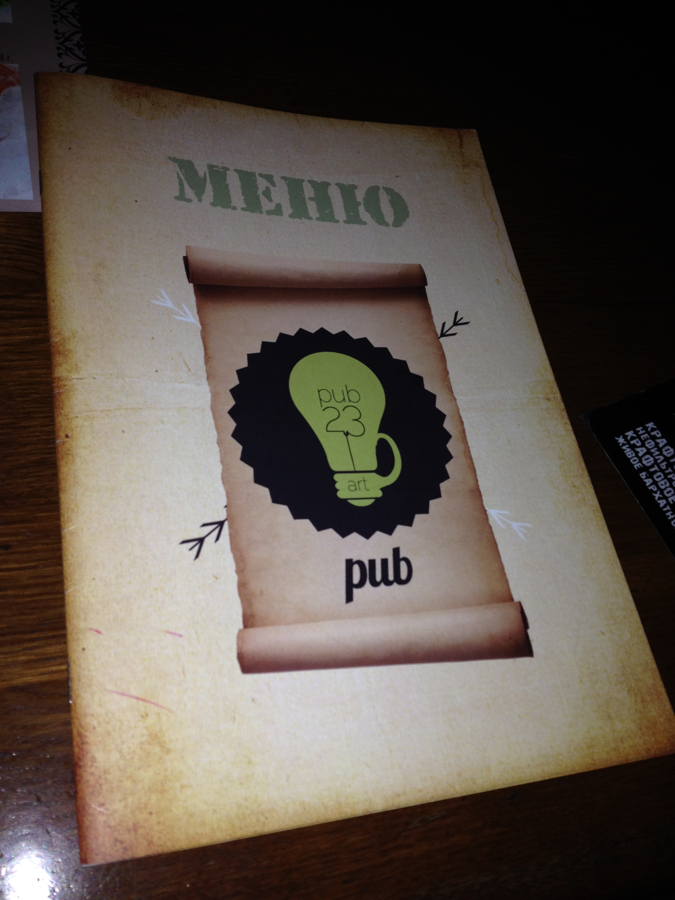 Slightly out of the city centre, Art pub 23 has lots of wood and some really quirky murals of life in something like the 1600s. Behind the bar there a massive beer barrel from which they will pour you a pint from their wide selection, which for a while including Carling! They also make their own beer and wine. 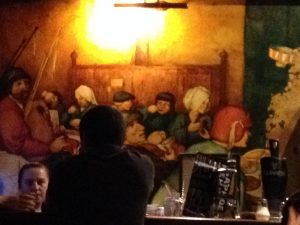 This is only the bars in Odessa to visit in the city centre. There are loads of places along the beach too, some of which disappear in winter, and some which are there all year. Great to have a little pub crawl along.

Added to this are the beach clubs of Arkadia, such as Ibiza and Itaka which in the summer are full of people dancing on the sand until dawn. I can’t really comment much on this, because clubbing is not really our thing, so we didn’t partake in this type of nightlife in Odessa. Lots of people we worked with loved it though.