Travellers in this region gravitate towards Angkor Wat. Photos of its iconic shape at sunset attract people from near and far. It’s like the Macha Pichu of South East Asia. But you don’t need to go to Cambodia to see this type of temple. Similar ones exist all over north-eastern Thailand, like Phimai historical park, near Nakhon Ratchasima (also known as Korat). 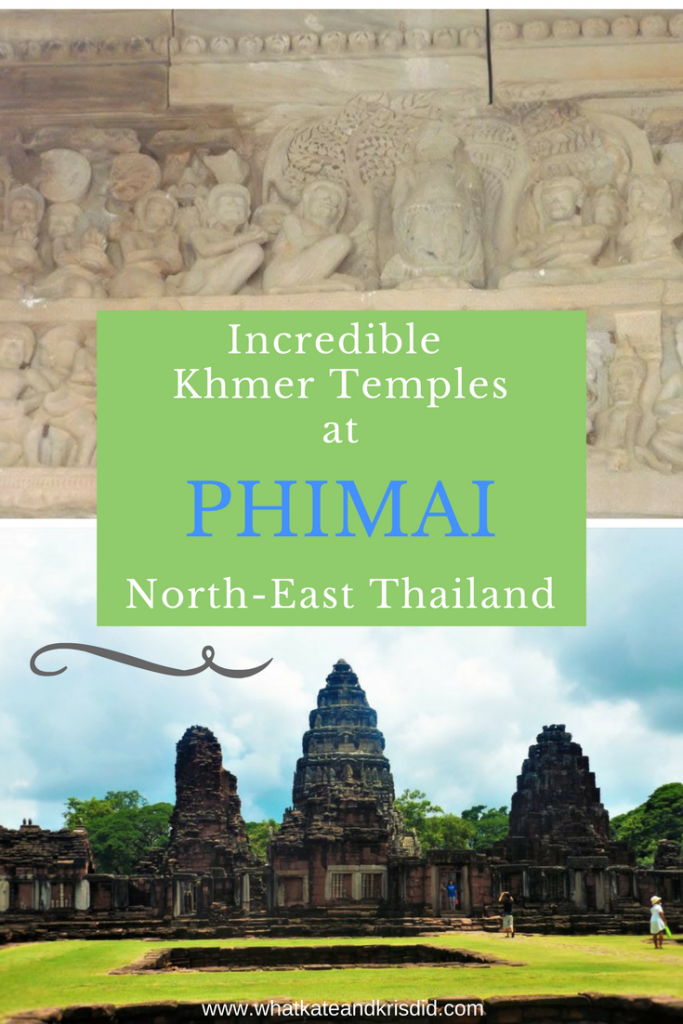 Angkor Wat – Not a temple, but a city

Many visitors planning a trip to Angkor Wat don’t realise that there’s not just one temple. Angkor, meaning Holy City, was, in fact, the capital city of the huge Khmer empire. Thought to have once been the biggest city in the world, at 1000 square km (to put that in perspective, New York is less than 800 km² and London is about 1,500), the temples are just a part of it. In total, there are allegedly over 1000 temples, including the famous Angkor Wat and Tha Prom, seen in Tomb Raider, the massive heads of the Bayon and the pretty pink walls and lotus ponds of Banteay Srei (click here to read our blog from Siem Reap in 2007). 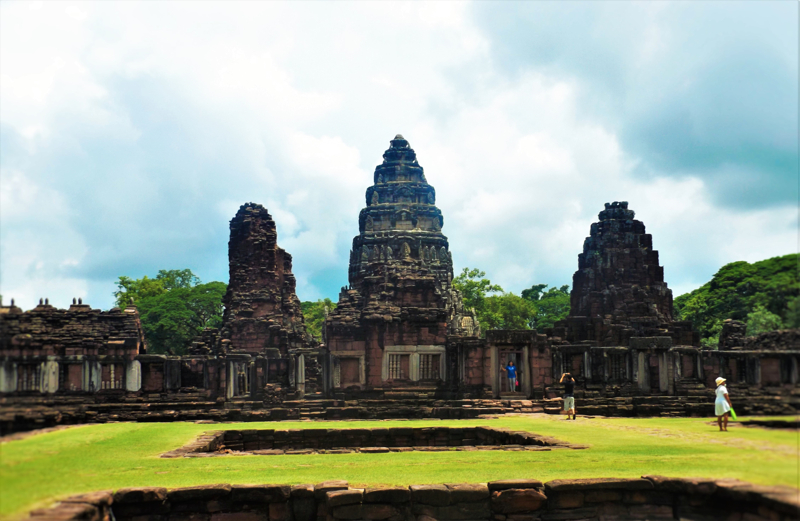 The Khmer empire ruled the area of present-day Cambodia, Laos, part of Vietnam and northeastern Thailand from 9th to the 13th centuries. They seem to have had a complex and highly developed society with amazing art and highly developed engineering. Holding immense power, they built stunning temple complexes all over their lands. These stretch the history of the empire. 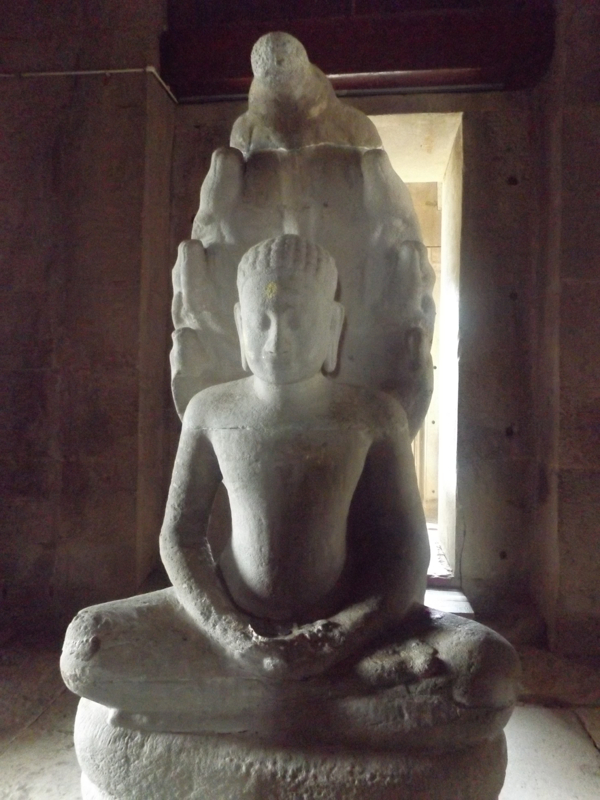 Then, it all collapsed. There are various suggestions of the reasons for that, including war with Siam and natural disasters such as flooding and/or drought. But no one actually knows.

There’s a myth that Angkor was then swallowed by the jungle, hidden for the next 500 years, until it was discovered by a French explorer in the 19th century. It certainly sounds good. It conjures up romantic pictures of a man using a machete to hack his way through the rainforest. Probably accompanied by locals carrying his belongings, and inappropriately dressed in a waistcoat and cravat, his knife would suddenly his something hard. Reaching to tear away the plants, he’d reveal a beautiful carving and everyone would gasp…..

……All rubbish. Pity. It’s a fun story. Very Indiana Jones. Or the imagination of someone who spends too long watching old movie reruns on Sunday afternoons. Turns out the local people, as you would expect really if you think about it without your romantic head on, always knew the old city was there. The temples had been in continuous use for worship. They’d shown them to various traders from Europe and China over the years. They showed it to the French explorer and he wrote about it, so publicised it back home. But he didn’t discover it.

Recent aerial scans show the outline not one, but several cities, linked with roads and canal networks, suggesting the biggest empire in the world in the 12th century. In 2015, laser scanners attached to helicopters were flown over the whole area, building up a 3D model of the site. 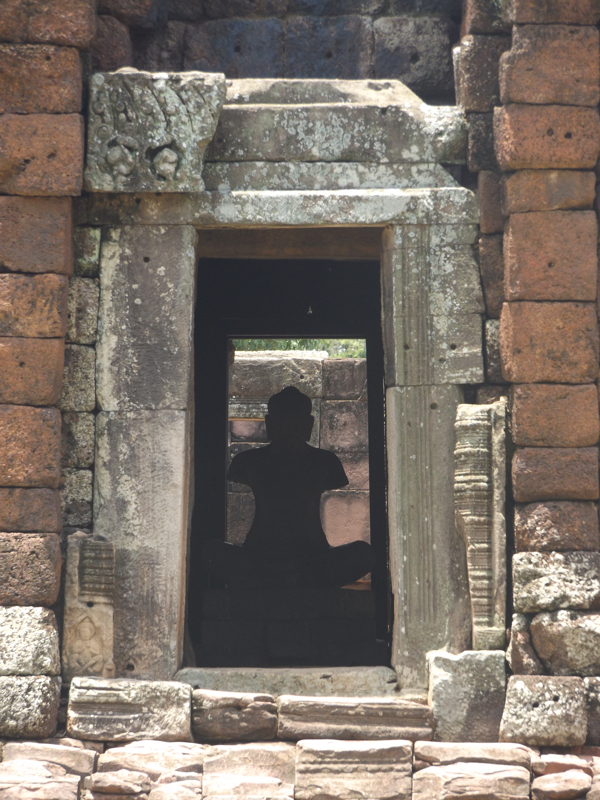 Why are you talking so much about Cambodia? You are perhaps wondering. Isn’t this a blog from Thailand? Well, yes, it is. And as I said, the Khmer empire stretched into Thailand and so do the ruins. Phimai, near Khorat, around 4 hours from Bangkok, is home to a Khmer temple thought to have influenced the design of Angkor Wat. Built in the 9th century, the temple was part of a settlement on the trade route to the capital at Angkor.

The modern town of Phimai has developed around the ruins, which can be found in a square enclosed park in the centre. Parts of the 13th-century city walls still stand, the gates standing on mounds of earth. Next to them are square ponds full of lotus (what’s the plural of lotus? Loti? Lotuses? Oh I don’t know) with steps going down so you can have a dip (if you want to have a swim next to a busy road). 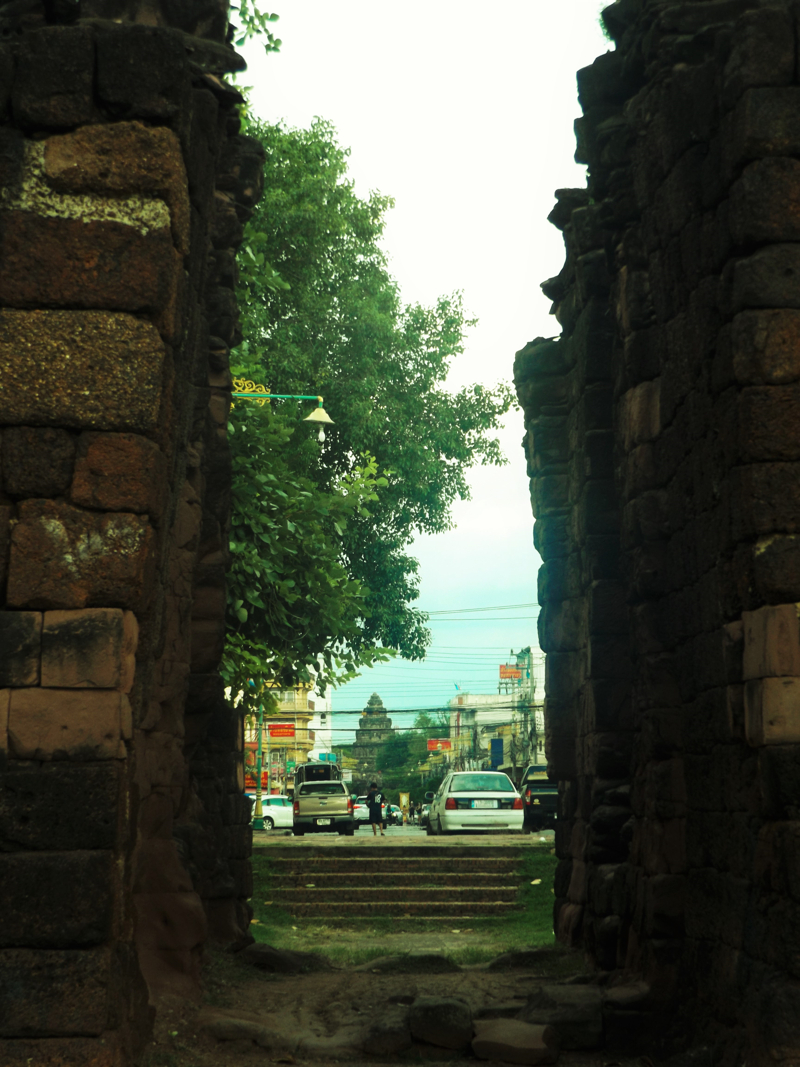 Looking towards Phimai Historical Park from the town

We visited Phimai Historical Park after our trip to Khao Yai national park where we saw wild elephants. From Pak Chong, we got a bus into Khorat bus station, and then another one out to Phimai. We stayed in the cute little Moon River resort, a row of wooden bungalows on the banks of a river. At the Moon River Resort, you can swim or kayak in a cornered off area of the river, or just relax on one of the many riverside seats. For 600 baht a night we got a clean simple bungalow with a hot water bathroom, fridge, air con and TV. Breakfast was an extra 75 baht each and included eggs, toast, coffee and a cafetiere of green tea. The owners are a Thai-German gay couple who were friendly and helpful. They even drove us to the bus station as we left. 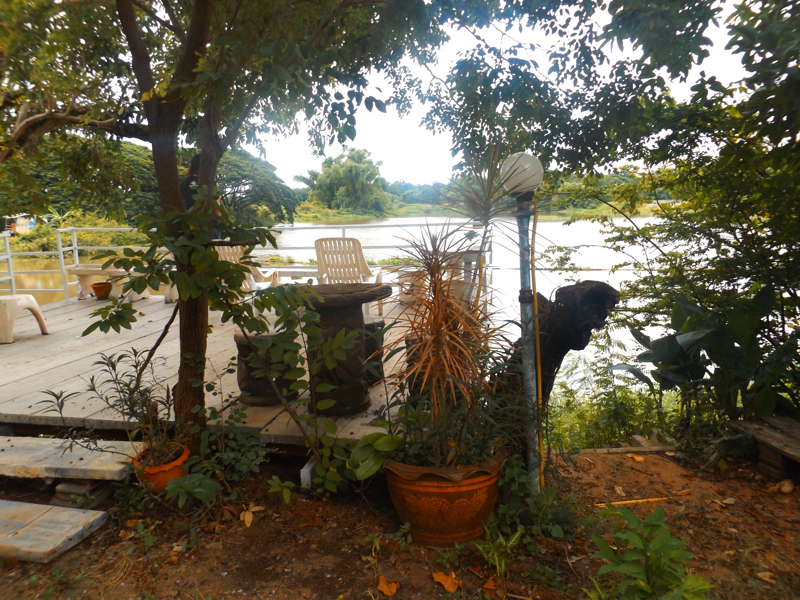 Oddly, while listed, the place didn’t make it onto the Lonely Planet map, and the guidebook description of “in an almost rural location” made it sound like it was miles out of the town. It isn’t. If the map had included another couple of hundred meters, it would have made it on. It’s just the other side of the river from the Phimai Museum. An easy ten-minute walk into the centre of town.

One of the great things about these smaller temples is the lack of crowds. Honestly, when you go to one of the big famous ones like Angkor Wat, you have to share it with thousands of other people. When we paid our 100 baht entry fee to Phimai to the smiling guard, we nearly had to it ourselves. We explored the buildings, climbing up steps and through doorways, admiring the amazing carvings and statues. People didn’t get in the way of photos and there weren’t massive groups posing with selfie sticks. These off-the-beaten-track places in Thailand are fantastic to visit.

The recently renovated Phimai museum was full of more carvings and statues from the ruins – freezes of the Ramayana, the churning of the sea of milk and other stories, of gods, animals and the ever-present ‘lingus’ (willy). It was well worth the 100 baht entry fee. The building itself is really pretty and next to a 13th-century reservoir. 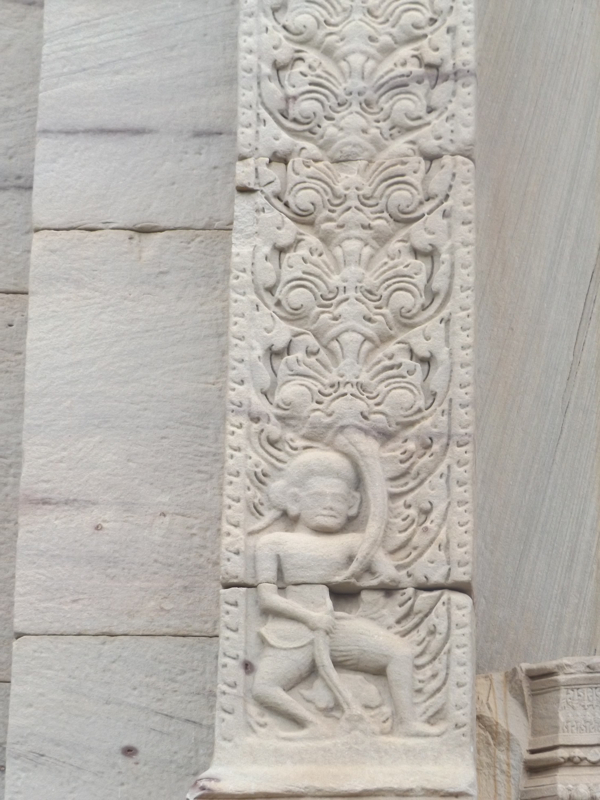 Where to eat and drink in Phimai

We explored the pretty small town. There are only a few tourist- orientated food and drink places, but they sufficed. The Lonely Planet claims that the night market is “more of a fresh- food market than a dining destination“, which again is rather misleading. To me, that means it’s dirty fruit and veg, and raw meat and fish. However, there were stalls of Thai snacks – sausage, pancakes, kebabs and cut fruit, trays of freshly cooked curries and noodle dishes, and bbq fish. While there weren’t actually tables and chairs to eat the food, you could easily pick up a full meal and take it back to your guesthouse. Or just munch on your way around. Some food carts did have their own seating.

Rabiang Mai, on one of the side roads from the temple complex, is also a Lonely Planet-recommended restaurant. It says that it’s “a tad on the pricey side” which I can only think is because the writer ate in some dirt cheap places before. We didn’t think it was at all expensive. We had a prawn dish and a fresh fish dish with papaya salad and mango salad and some beers for a couple of hundred baht. The outdoor garden-style setting had a lovely atmosphere, the waiting staff spoke enough English and there was live music.

We also spent time sat outside the bar opposite the clock town in the centre, watching the world go by and sheltering from the rain. I have no idea what it is called, but you can’t miss it. Look for the Chang beer sign. There was a lot of rain, which was fine because the beer was cheap and cold. There’s an English menu and also a selection of food. 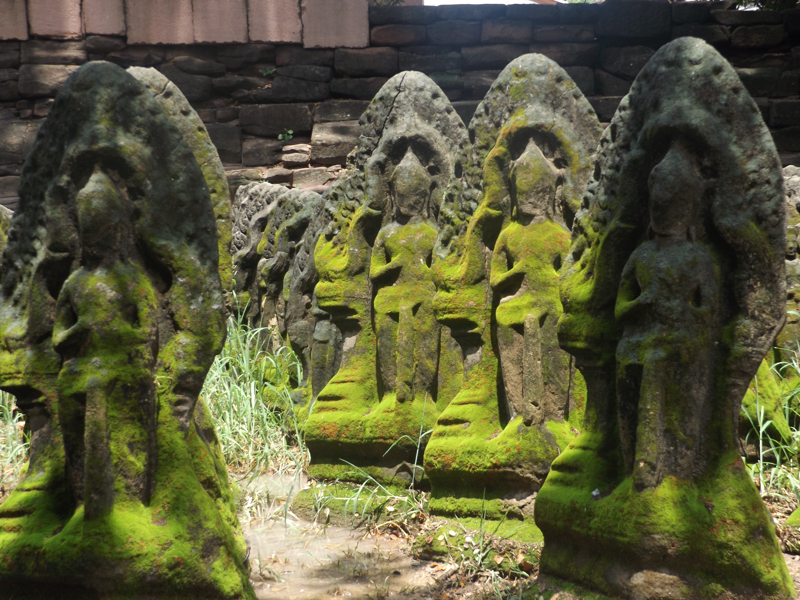 If you want to experience a Khmer style temple, you could do worse than head to Phimai Historical Park. The temple is interesting, and the town is a cute and chilled out place to spend a couple of days. There were a few other tourists, and we saw a tour group or two, but it seems quite off the beaten track. 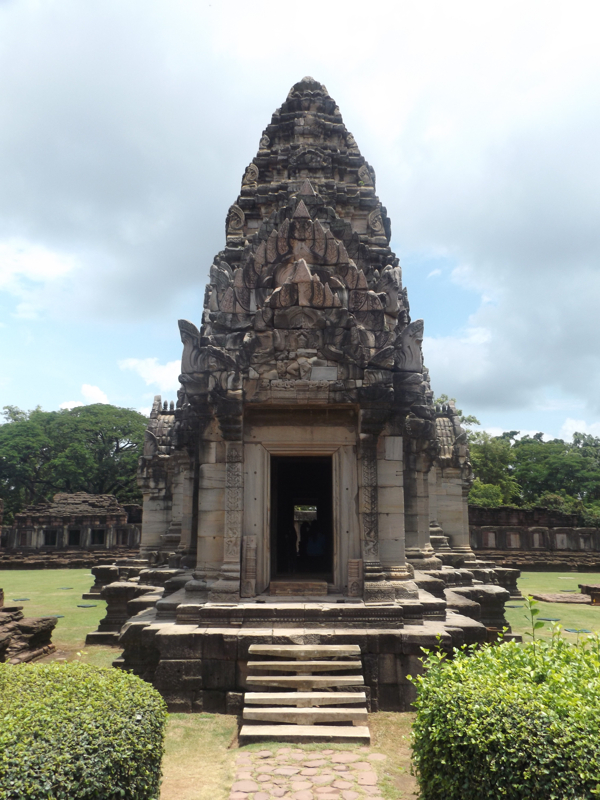 There are other temples in the area you could visit. The Swiss couple in the next bungalow to us were using Phimai as a base, and also went out to visit Phanom Rung historical park, near Buriram. They had a car, but the bungalows could organise a car and driver too. We thought we’d save it for another time. There’s so much more to see in northeastern Thailand. We’ll be back. 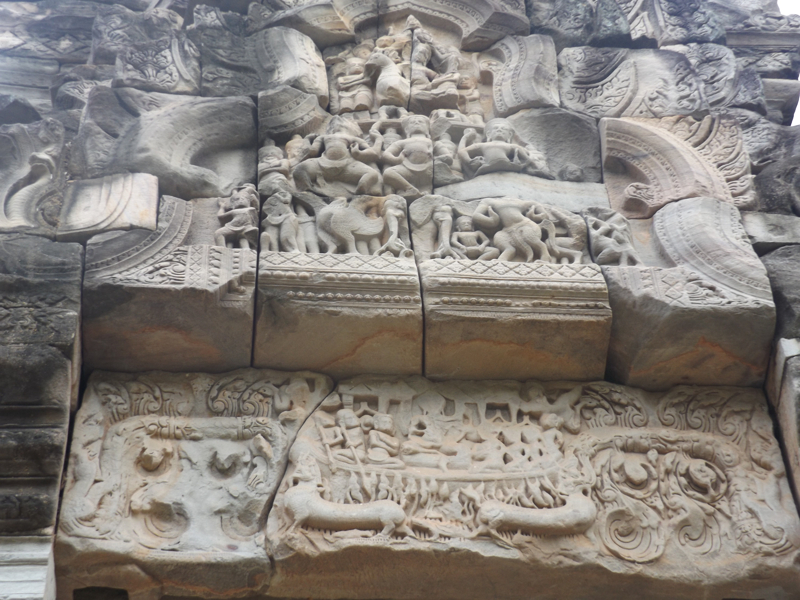 How to get to Phimai Historical Park from Khorat

We took the bus from Khorat, also known as Nakhon Ratchasima, bus station, stand number 45 at the back, to Phimai. It says Nakhon Ratchasima – Phimai on the side. Don’t worry about finding it. Just walk through the bus station and tell the people who ask you where you want to go. They’ll point you in the right direction. You just climb on the bus and pay the conductor the 50 baht ticket price. We got off the bus by the side of the road beside the turning for Sai Ngam. From there we walked to the Moon River Resort. Alternatively, you can just get off where the bus stops by the clocktower in the centre of town.

We got around the town on foot. Everywhere seems to be an easy walk away. No need for taxis or tuk-tuks.

On the way back, the owner of the Moon River Resort dropped us in the centre and we jumped on the next bus back to Khorat. There we changed onto a bus to Bangkok. These leave from the front of the bus station, but again, if you walk through someone will point you in the direction of the bus. The journey takes about 5 hours. We paid about 120 baht each for the ticket, which included water, some juice, and a bread product. There are plenty of shops at the bus station, as well as a food court, if you want a more substantial meal.

Where to stay in Phimai

We stayed at the Moon River Resort for 600 baht a night, booked directly with them via their website. We paid when we checked out. Breakfast was 75 baht each extra. We paid it and it was fine, but you don’t have to. 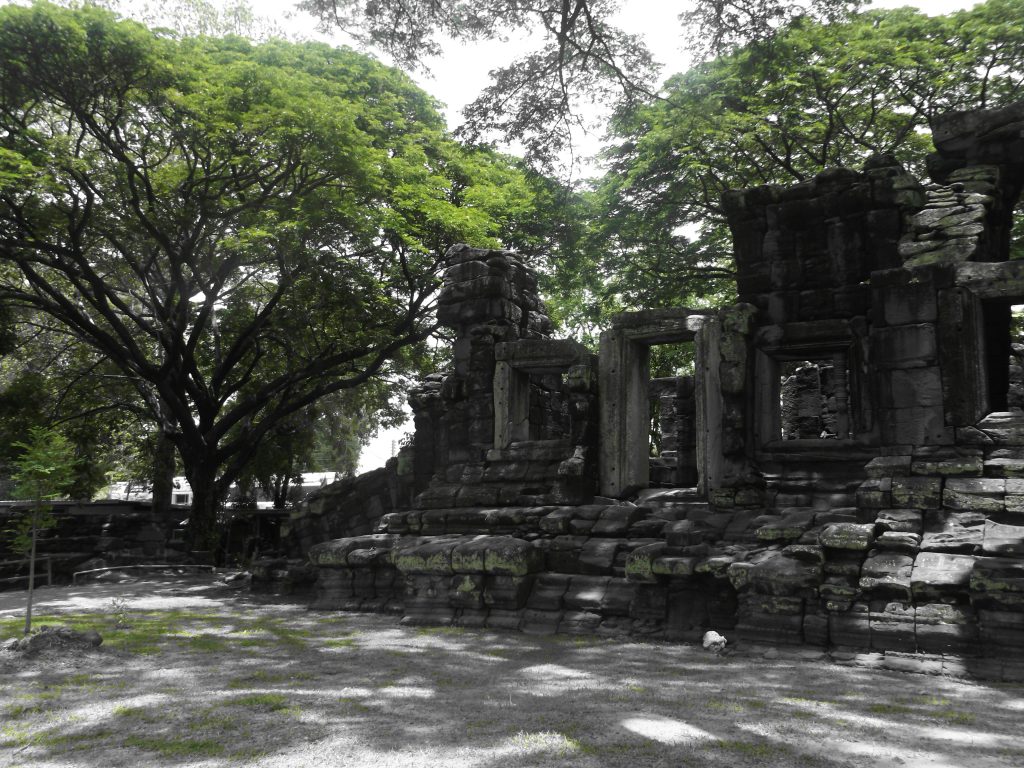 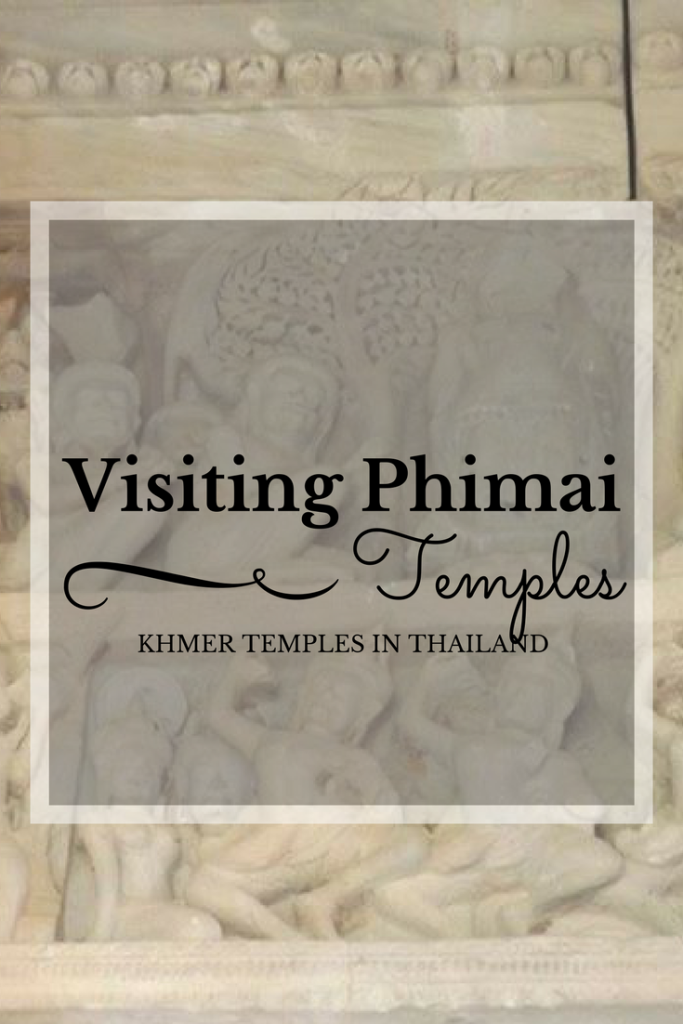