On the trail of Nellie the Elephant in Mandalay

Nelly the elephant packed her trunk and said goodbye to the circus.

The head of the herd was calling, far, far away.

She left at night by the silvery night on the road to Mandalay – hey!

….and that was my first introduction to the concept of Mandalay as a young lad growing up in England. But where was Mandalay?? What was this song about? And was Nelly really so pro-Trump??

There’s another reference to Mandalay I’d heard too. But that was by Rudyard Kipling. Apparently, he didn’t write the Nelly song. He wrote…

“Elephints a-pilin’ teak
In the sludgy, squdgy creek,
Where the silence ‘ung that ‘eavy you was ‘arf afraid to speak!
On the road to Mandalay…”

…so he did talk about elephants, and also the road to Mandalay. Apparently, he also made exceedingly good cakes (if you get that reference, I salute you). 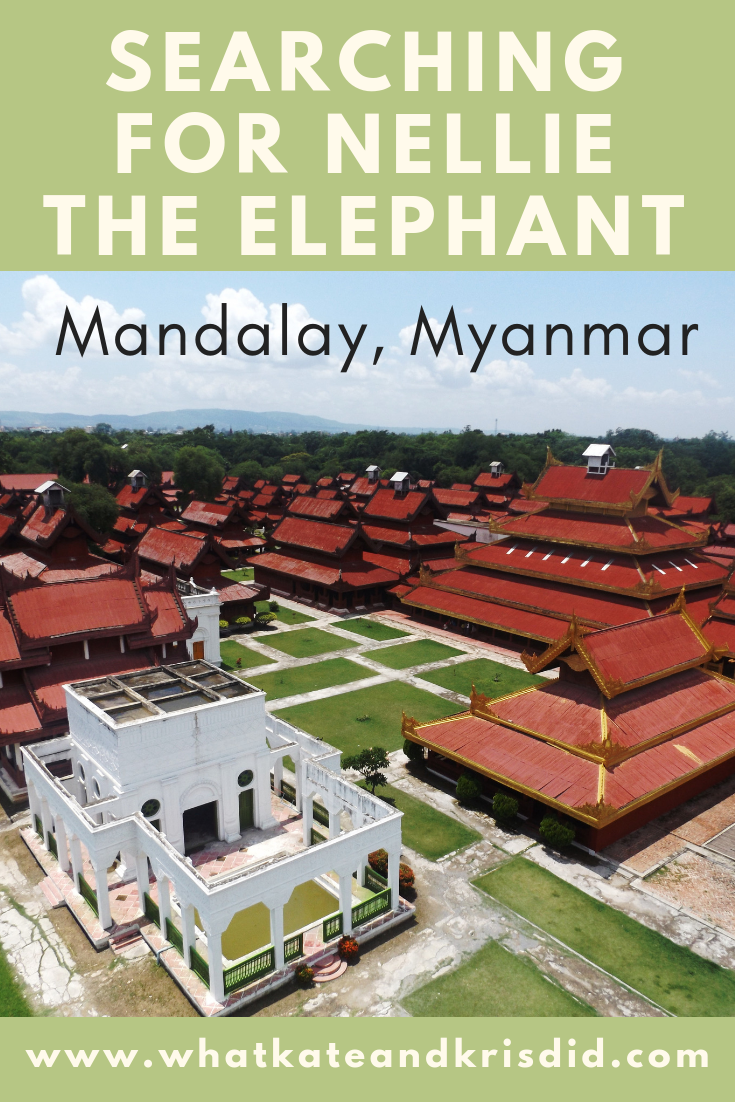 We took the road to Mandalay on a minibus and stayed in a little hotel called Diamonds Inn near the train station on a busy road in the centre of town.

The good news is – it stopped raining! (Read about our wet experiences in Yangon in this post). Woo! So we had plenty of opportunities to do our favourite thing – wandering the streets.

Mandalay was the former capital of Burma. In fact, it was the last capital of Burma before the British took over the whole country. As such, it’s home to the royal palace (rebuilt). This big complex was walking distance from our hotel and our first port of call when we arrived in the city.

It’s huge. We walked for ages along the side of the moat which surrounded a big wall, trying to find the entrance. When we finally found a gate, it was restricted access for the military…so we kept walking. Finally, we found the visitors’ entrance where we had to hand in our passports to an AK-47 wielding soldier to gain a VISITOR lanyard and access to the palace.

It turns out it’s not only a royal palace, but also a huge military base and you’re implored to not stray from the path. 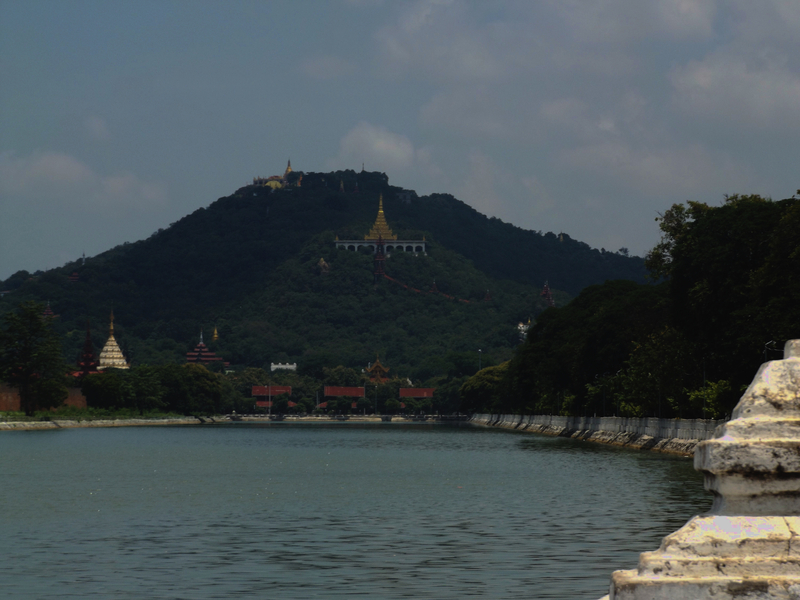 Mandalay Hill – you can climb to the top. We didn’t

A bit of the history of Mandalay, courtesy of the internet…

So apparently (thanks, Google) the capital of old Burma moved to Mandalay around 1857 where it remained until it was taken over by the British in 1885. As usual, they looted the palace and nicked a load of stuff – surprisingly, much of which remains shamelessly on display in the Victoria and Albert Museum in London. Anyway, when the Brits took over they made the palace complex into an army barracks and called it Fort Dufferin. It was the perfect place from which to oppress the local populace. And this went on till World War 2 when the place was bombed to bits by the Japanese as the British retreated into India. Then, towards the end of the war, Mandalay suffered again as it was invaded (again) by the British who bombed it to hell also, and destroyed the royal palace.

…which leads us to the palace we were visiting that day – not the original, but a replica built in the 1990s.

The Royal Palace of Mandalay

So after passing the guardhouse and handing over our passports, we wandered up a long hot boulevard towards the main palace building. On either side there were signs warning us not to stray from the path in the military area. So we didn’t.

So into the palace… 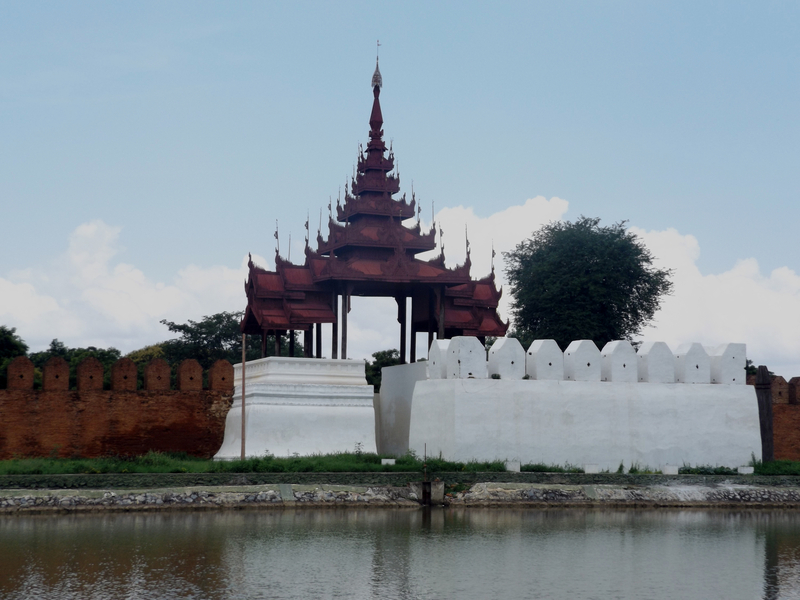 One of the many entrances to Mandalay Palace around the moat

The palace is a series of wooden buildings extending off into the compound with a few displays sprinkled in. There’s also a big watch tower to climb, from which you can see all around Mandalay and presumably watch out for the advancing Thai/Japanese/British forces. 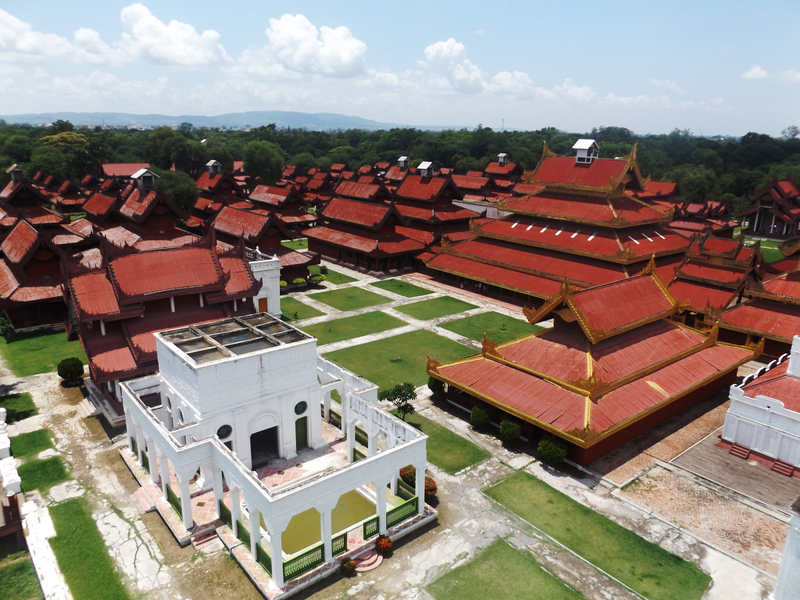 What we found odd is that a lot of the buildings were empty other than for roosting pigeons and ‘pigeon-related-detritus’. Also, it was a bit of a nightmare knowing when and when not to take off your shoes!

Doing nothing in Mandalay

There are lots of things to see in Mandalay. Lots and lots. But after a long holiday of tours we were knackered. We asked the hotel reception about tours to the Amarapura Bridge from all the photos, and to some of the other old capitals. She described a tour to all the sights. It started at 6am and involved a lot of temples, ending at about 7 at night. Now, there’s no doubt that the temples of South East Asia are stunning. But we lived in Thailand and have seen a lot. We’d done so much already that we couldn’t bear another tour.

The receptionist finished her description of the tour and looked at us for confirmation. We looked at each other. And said ‘maybe another day’. It was ‘maybe another day’ for our full four days in Mandalay. Honestly, we don’t think there’s anything wrong with not seeing all the sights in a place. For a start, it gives you a reason to go back. But ultimately, what’s the point of dragging yourself up and around these places if you are really not going to enjoy them. Save them for when you are less tired and you want to go.

Lazing by the Mandalay swimming pool

So one day we decided to go lie by a pool. To do this, we headed down to the Swan Hotel swimming pool on one of the corners of the palace complex. They have a swimming pool that outside guests can use for 7,000, which includes a towel.  There, we spent the afternoon lounging in a deserted hotel garden and watching the hotel maids clean the windows of the seemingly empty rooms…

It was a perfect day.

The rest of our time we wandered around the streets and markets. The city market spreads in all directions. There are parts in old wooden buildings where people sell dried fish, fish pastes, huge baskets of watermelons and pineapples, beetlenut leaves and many more things. Then there are modern buildings with several floors selling clothes and toys. One floor was just fabric, including brightly patterned pieces to make the longyi – the wrap around skirt-type piece of clothing worn by men. 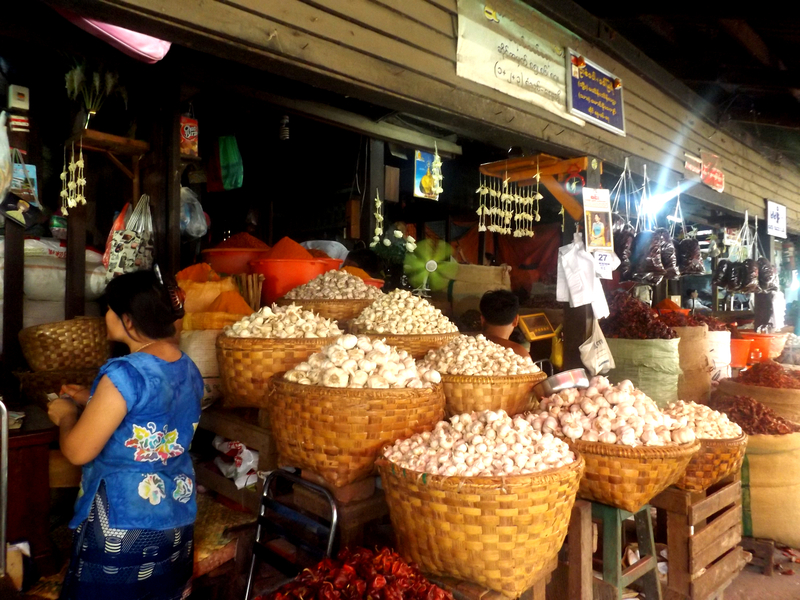 A great thing about the markets was that nobody bothered us. We’ve visited so many South East Asian markets and there is often so much hassle. Once at the night market in Chiang Mai, a woman managed to dress Kate in a wraparound pair of trousers while she was trying to walk away. In Ben Thanh market in Saigon, whenever we went, people would shout ‘t-shirt! – I have big size!’ which isn’t flattering. You have to dodge people pulling at you and shouting at you all the time.

In Mandalay, we walked around and no-one seemed to even notice us. No hassle. No hard sell. We bought some longyi material to use as throws and the staff were polite, but not at all pushy. It meant we could wander and explore without stress. 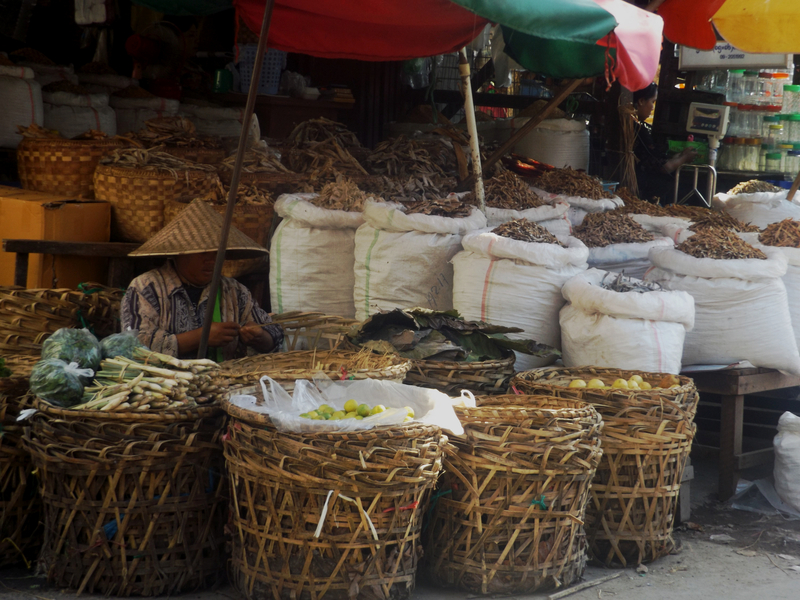 Baskets of dried goods for sale in Mandalay Market

We spent the evenings in various beer stations. Beer stations are all over Myanmar. They are often open fronted buildings that serve draft and bottled beer. There’s a BBQ and refrigerated cabinets full of assorted foods – kebabs, whole fish, vegetables etc. that you choose and then get BBQd freshly for you. You can order fried rice and noodles to go with it.

We spent several enjoyable evenings in the beer stations, experimenting with various Myanmar beers and eating good food. You can read more about our experiences with food in Myanmar in this post: Food in Myanmar 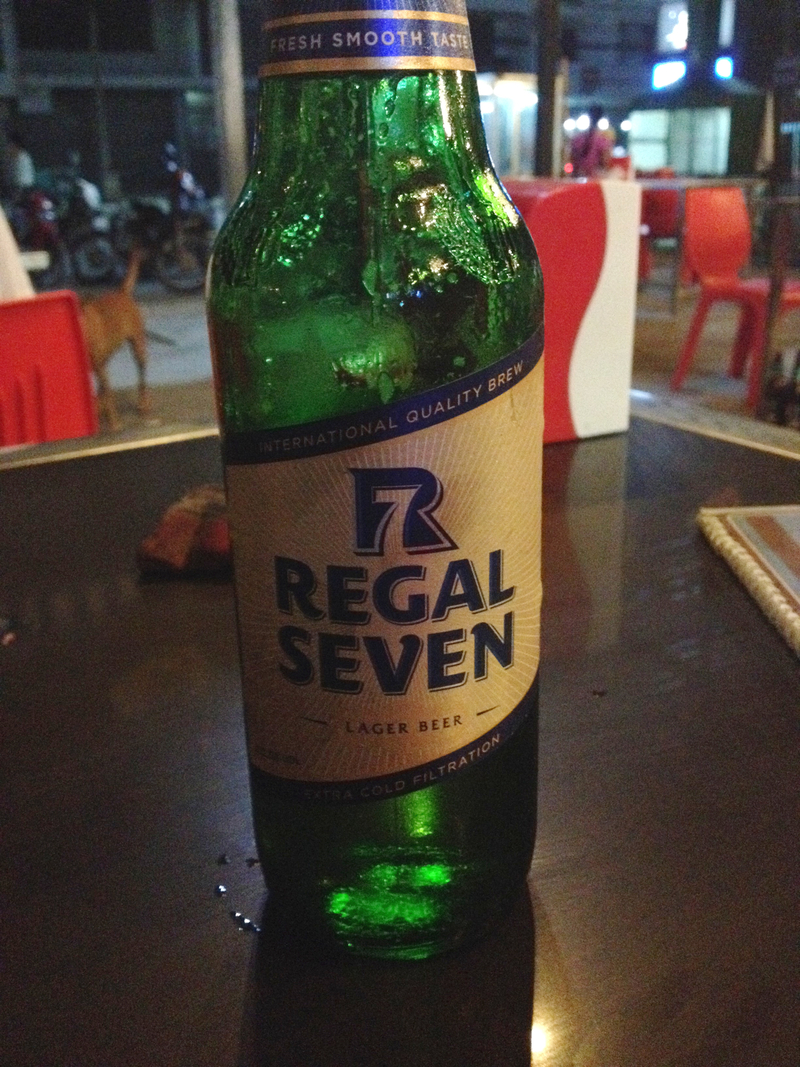 We took the bus from Bagan to Mandalay. We bought it from Golden Tours Travel, the first agency on the left on the main tourist street in Bagan. It cost 9,000 each, including a pick up from our hotel and a drop off in a songthaew in Mandalay. We left at 9 and arrived at 2, with two stops on the way.

We stayed at the Diamond’s Inn for four nights for $99. It is a new hotel with en-suite rooms and a good breakfast. The staff were friendly, even bringing fruit to our room every evening. Kris celebrated his birthday while we were there and they arranged a cake for him too.