This is the second blog about our trip to Khao Yai national park, including seeing wild elephants in Khao Yai as well as wild gibbons. If you’ve missed the first one, it’s here: Playing Real Life Pokemon Go in Khao Yao national park.

I’d read it first if I were you. If you’ve read it and you liked it enough to read on, hope you enjoy the next part…..

If you are looking for more practical information, our post on How to Visit Khao Yai will help you. At the Lam Takong campsite, inside Khao Yai national park, we set up for the night. Ben, the guide, got us tents from the office and helped us erect them (well, he basically put them up while we watched). The campsite had large stretches of lawn, with a road through it and parking spaces. It was on the banks of a river. There was a restaurant at one end, some buildings for the rangers and a couple of wash blocks. Several samba deer were around the site, wandering about and wading in the river. They were completely unfazed by the people joining them for the night. 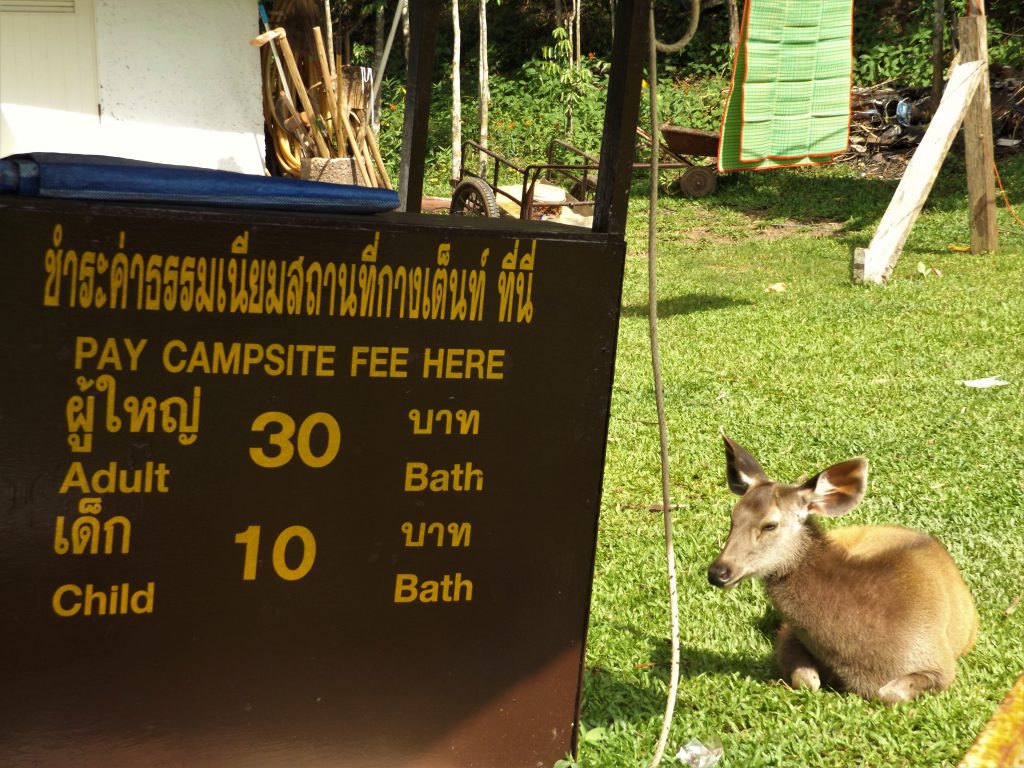 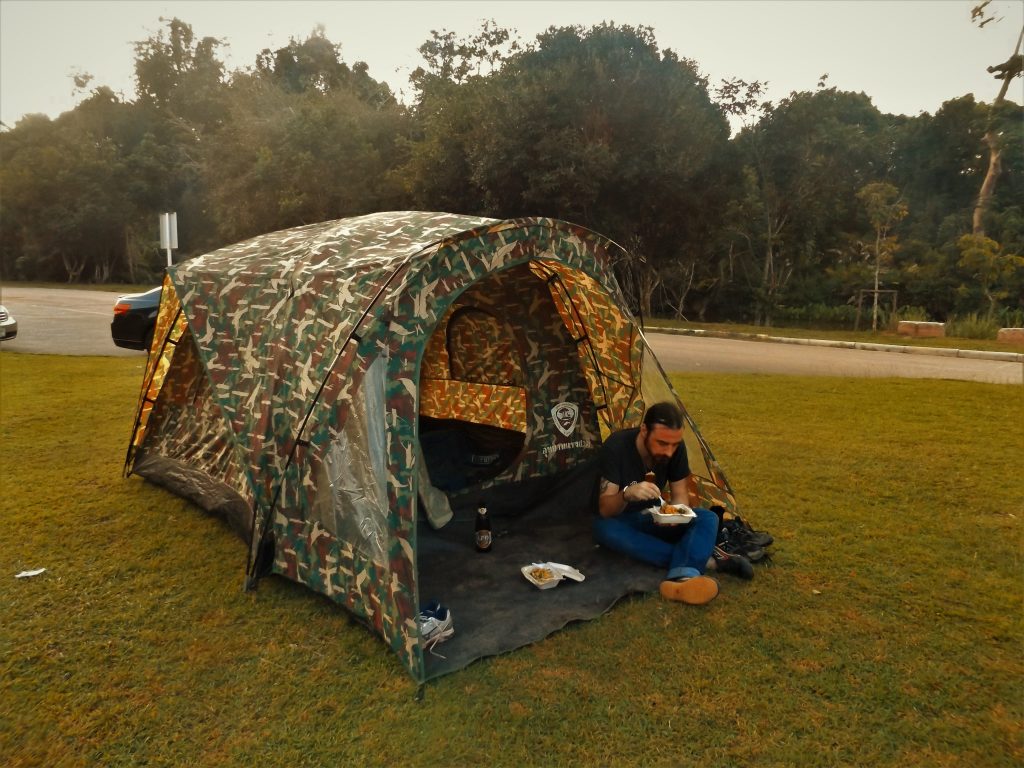 Enjoying some noodles outside our national park tent

We settled in and had some dinner. Sitting outside, chatting in the dark, lit by candles, Ben suddenly came running over from the other side of the campsite.

“I SEE ELEPHANT”, he shouted.

We all jumped up and ran after him, to the gate of the campsite. There, a massive, bull elephant with huge tusks was chopping on some vegetation by the side of the road. Now I know that elephants have this reputation of being gentle giants. They aren’t. They are really, really strong. They can pull up a whole tree with just their trunk and throw it to the side. If they trample on you, you’re dead. So we kept a respectful distance. The elephant decided that the vegetation inside the campsite looked particularly tasty, so he walked behind the buildings and into the camp. The rangers immediately called the park biologists to come and usher him away, which they did, but not until he’d trampled on someone’s tent. The rangers had got everyone out of their tents as soon as the elephant arrived, and everyone was safely hiding out of the way next to the restaurant. The biologists came in their landrover and using a combination of their lights, and the lights of a motorbike, ‘encouraged’ the elephant to leave the campsite.

“They like to eat the bamboo in the campsite”, Ben told us.

You’d think they’d clear the campsite of yummy elephant food. But then, if they had, we wouldn’t have had that extraordinary experience.

The shower block from Resident Evil

Excitement over, we went back to our tents to get ready for bed. Grabbing our washing things, we walked over to the shower block, which was in complete darkness. The only lights were our headtorch and a candle. The concrete block, complete with sinister dripping sounds, looked like something from Resident Evil in the dim, flickering light. There were scurrying noises in the corners. Huge moths fluttered around towards our lights. A large frog stared up at me from one of the sinks. I was slightly afraid to use the toilet in case there was something lurking inside. The shower block was perfectly clean, with western style toilets, but for some reason there were no lights. Luckily there were no zombies either. At least none that we could see.

Sleeping through a thunderstorm

Here’s another confession. I’m not just scared of falling off things. I’m scared of all kinds of things. Deep water is one. I used to be terrified of thunderstorms. I’ve camped through several thunderstorms and it’s not been good. One time, in a tent with two friends, I made them sit up with me and count how close the storm was, while I hyperventilated next to them.

I seem to have grown out of that. There are lots of thunderstorms in South East Asia in the rainy season. They happen nearly every night and they can be LOUD and dramatic. I guess the novelty has worn off and I don’t notice them anymore to be scared of them. In any case. I slept very well that night in the tent, despite a long and very loud storm going on around us. Poor Ben’s tent flooded and he had to move under cover.

We found the wild gibbons in Khao Yai!

The next morning we woke up to the sound of the dawn chorus, wild gibbons calling, and Ben, our guide, snoring. After breakfast, we took down the tents (we actually helped this time) before the truck pulled up with another family to join our day’s trek. Dutch again, in case you were wondering.

The day’s trek was a bit less strenuous, as the ground was flatter and there were no logs to balance across (or not). However, we probably saw more wildlife. We saw two different families of wild gibbons – white-handed gibbons. Thai gibbons come in different colours, from cream to black, and one family can have different colours. Parents and children were swinging from branch to branch, sometimes just hanging around by one arm.

Did you know that gibbons are actually species of apes, along with chimpanzees, bonobos, orangutan, gorilla and homo sapiens (us)? Not monkeys, apes. Quite closely related to humans. I’ll leave you to decide which human. 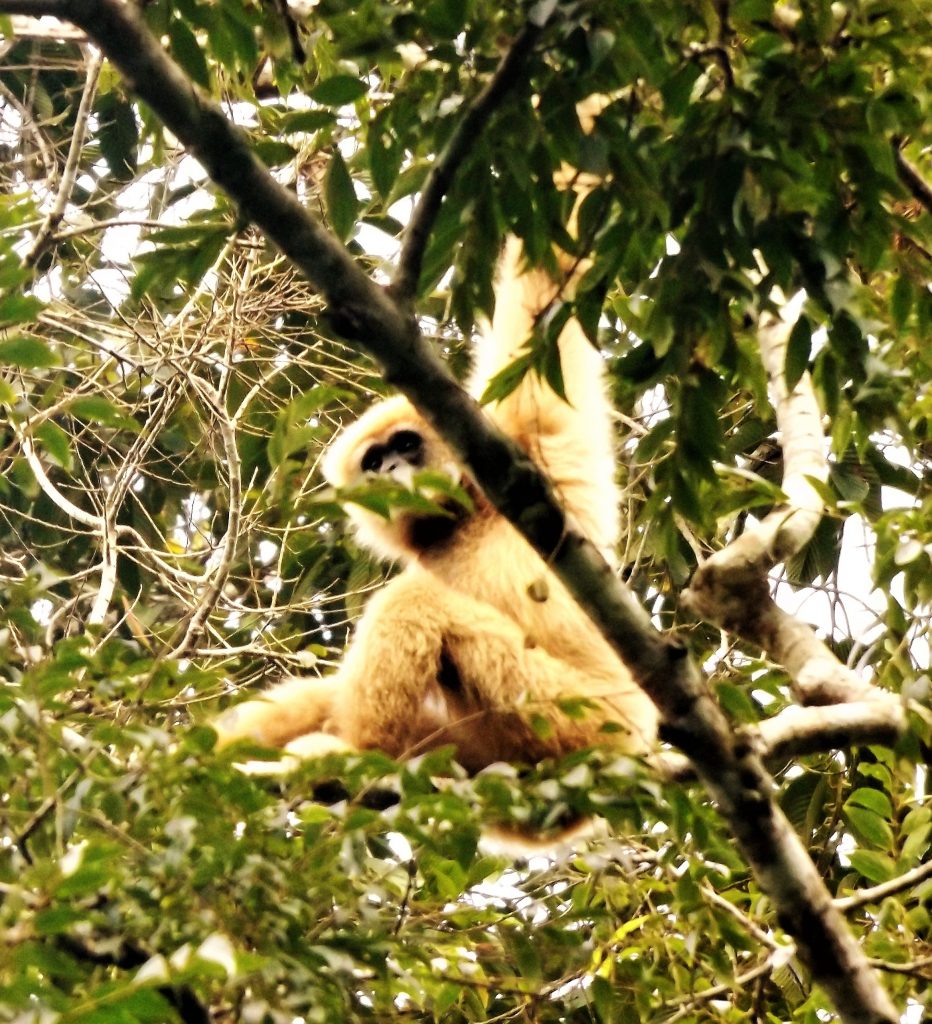 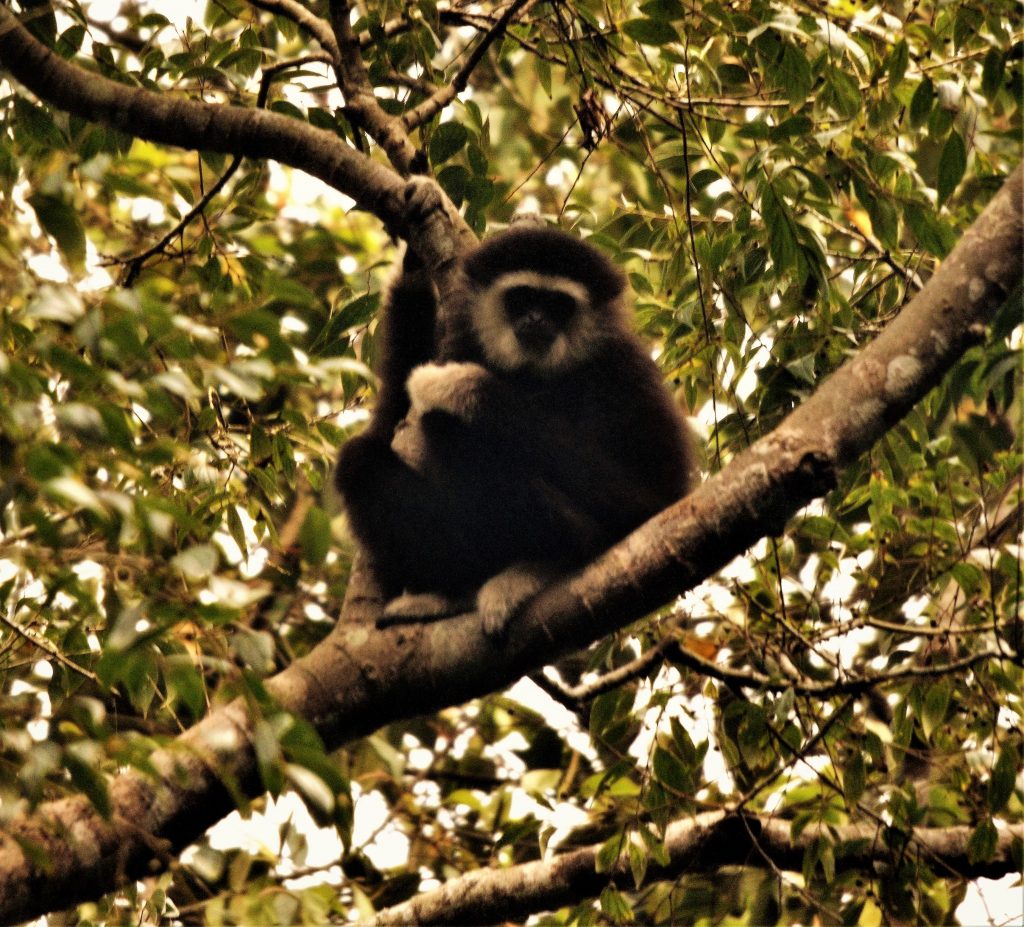 White-handed gibbon. Same species and probably the same family, but a different colour

This day’s waterfall was Heo Narok, the highest one in the park at 80 meters. We reached it down a steep staircase through the jungle. It is a fast flowing, almost aggressive waterfall which soaked us with its spray. 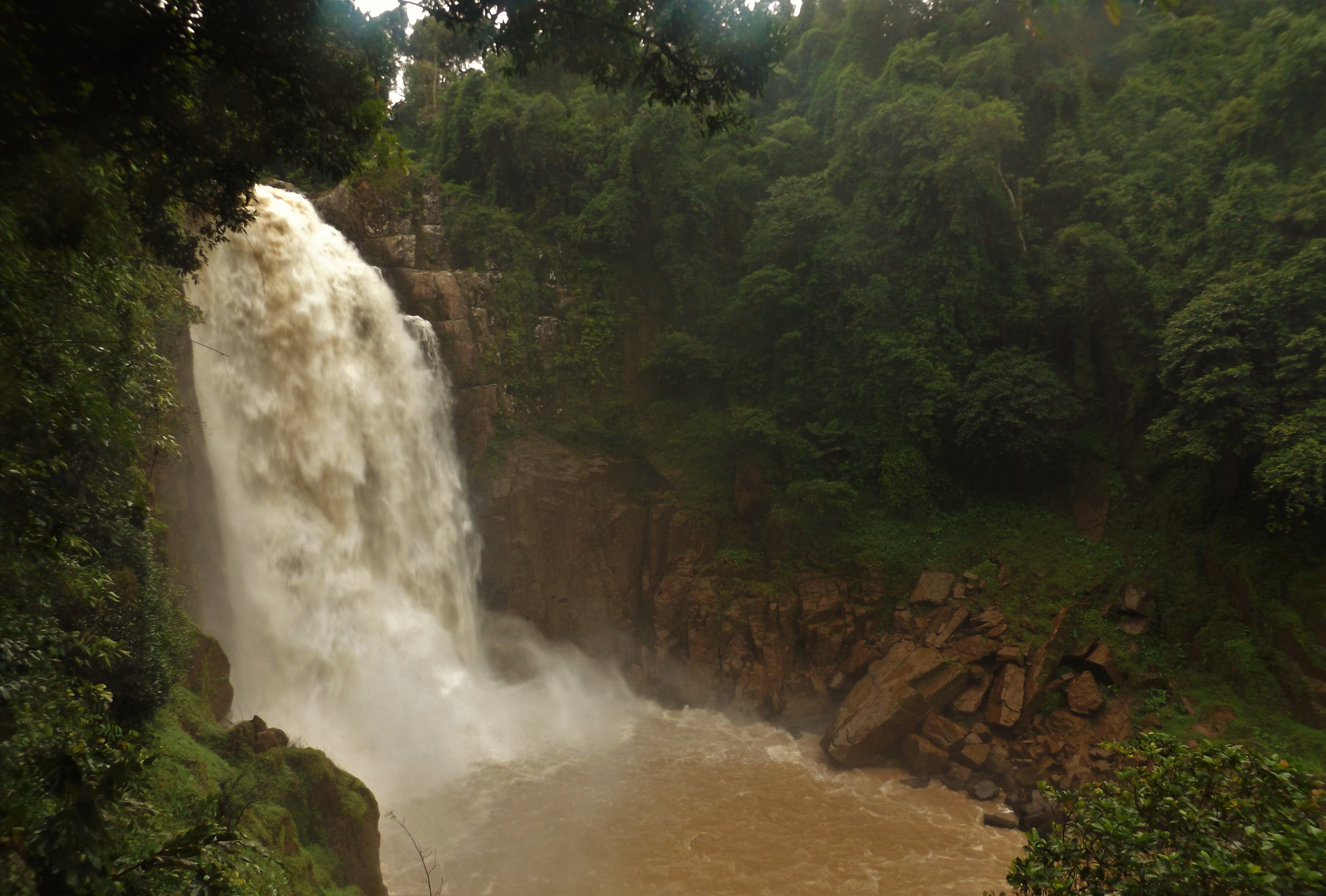 For lunch we went to Pha Kluaymai Camp Site, which was really busy as it seemed to be the only restaurant with any food. They had a good system going with all the staff and guides making noodle dishes and sending them out, and then someone else clearing the plates and cutlery into big bins at one side. As we watched, a large macaque monkey sneaked up to the table, ready to steal some food. Spotted by one of the staff, he quickly snatched everything he could in his arms, and ran up a tree. His stash was mainly knives and forks. His monkey family must have been really pissed off when he got back with the results of his foraging.

Towards the end of the day, we piled back into the truck and set off back through the park. Stopped at one of the checkpoints, the guide was told that they had been elephant sightings. Off we set to find them. Sure enough, by the side of the road, we came across a whole family of wild elephants. Adults, juveniles and a small baby were eating by the side of the road. 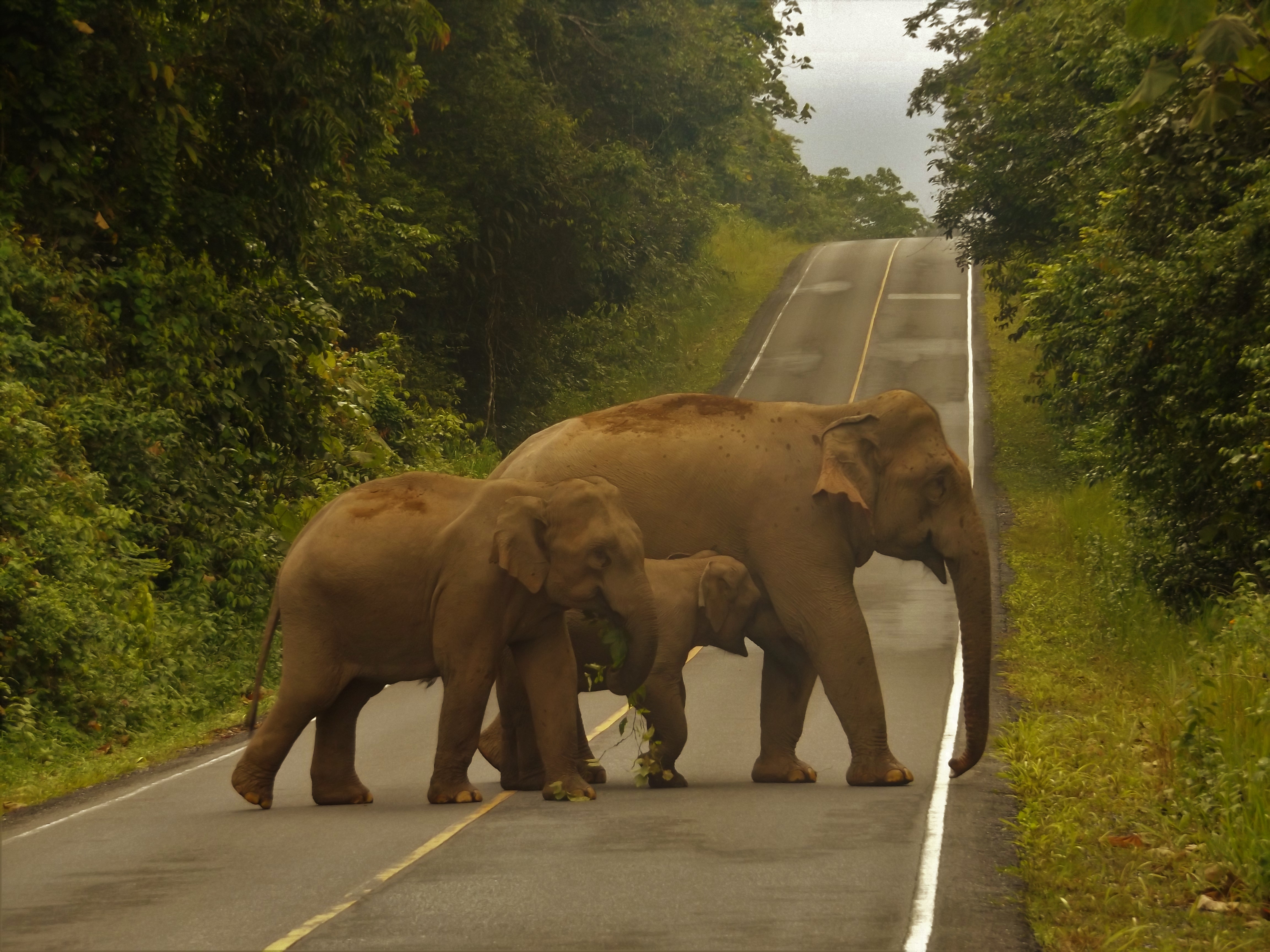 Soon there were loads of trucks and cars watching. The rangers had blocked off the road to cars (there is a through-road right through the park) to protect the elephants and it was full of people watching. Again, we were kept at a safe distance. The biologists were called to get them away from the road and safely away from vehicles. They used the same system of lights from the landrover and motorbikes, but this time one of the juvenile elephants decided to protect his/her young relatives and started to charge the landrover. Poor thing. After a while watching the family, they were ‘encouraged’ back into the forest and we went on our way.

If you don’t manage to see wild elephants in Khao Yai, you could go to the elephant nature park in Chiang Mai, like Paul and Carol describe. 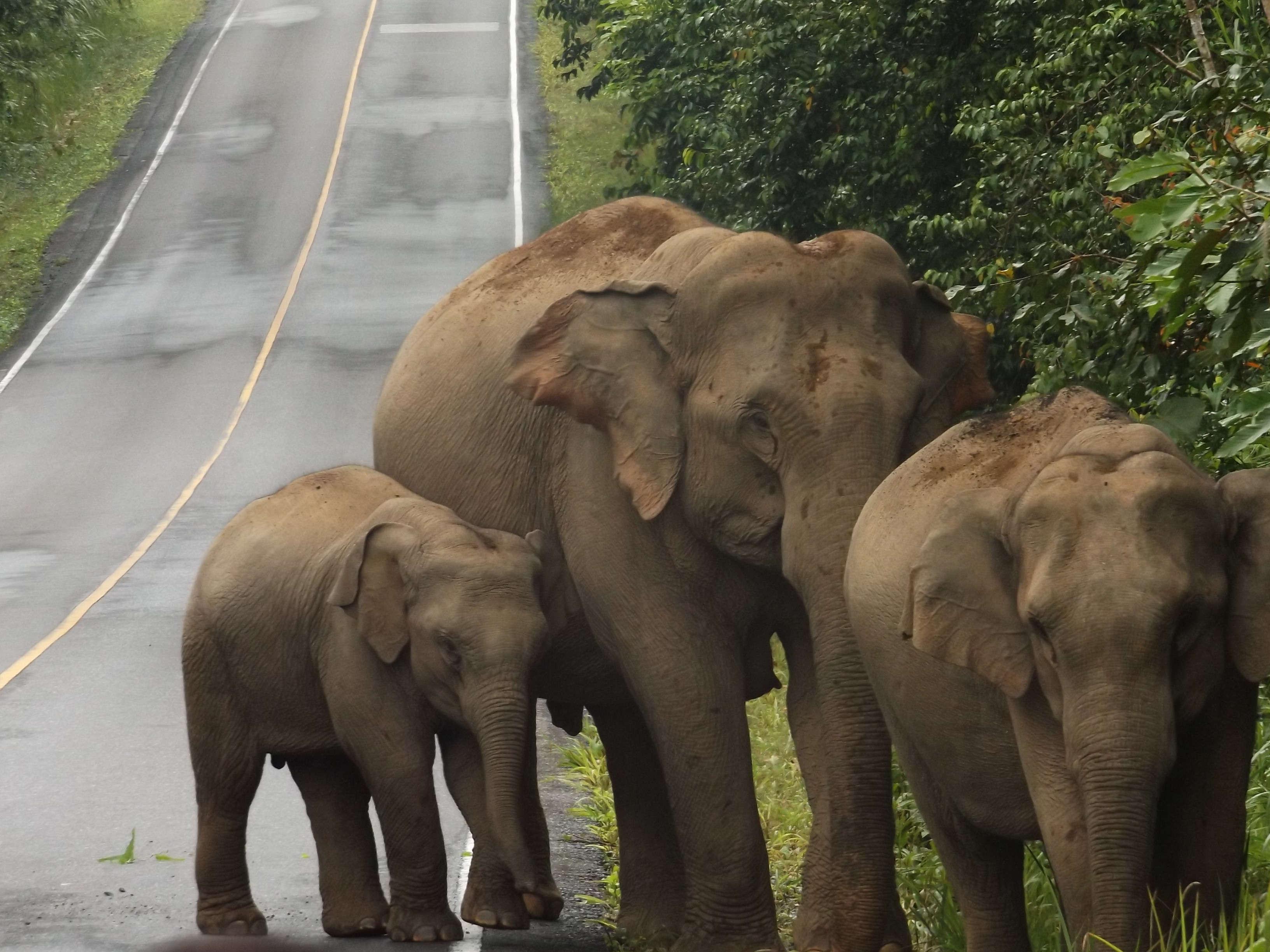 Wild elephants just hanging by the side of the road in Khao Yai.

Less than three days in  Khao Yai and we’d seen so much stuff. Elephants, gibbons, macaques, two species of deer, giant squirrels, snakes, monitor lizards, scorpions and lots of insects, much to Kris’ excitement. It was wonderful.

Still got some Pokemon to get for our Pokedeck though, so we’d better try some more national parks.

If you fancy a trip to try to see the wild elephants in Khao Yai national park, we have a blog: How to travel to Khao Yai, including how to travel, and tours.

Pin this for later?