Whale watching in the Gulf of Thailand

Whale watching in Bangkok? That might not be the first thing you think about doing when you are visiting the capital city of Thailand. But of course, with the sheer amount of sea around the country, you can imagine that there are a lot of whales in Thailand as well as dolphins in Thailand. And you can go whale watching in the Gulf of Thailand with the excellent Wild Encounters, Thailand company. So this is what we decided to do for our Christmas Eve. 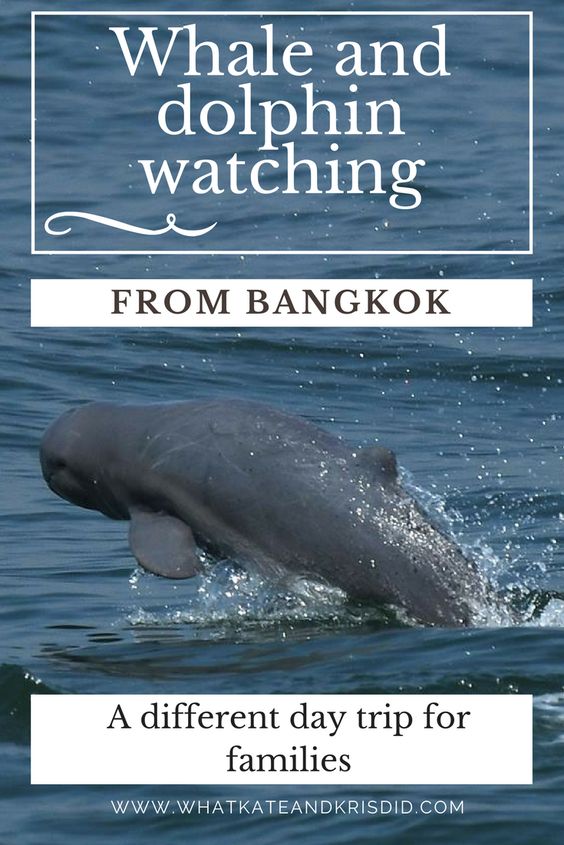 In fact, there are four species of cetaceans (whales, dolphins and porpoises) living in the Upper Gulf of Thailand – Bryde’s Whales, Irrawaddy dolphins, Indopacific humpback dolphin and finless porpoise.

Wild Encounter Thailand run regular day trips from Bangkok to see the Bryde’s whales in Thailand most of the year. For 2,300 baht per person, you get transfers from Bangkok, a full day out on the boat as well as lunch and snacks.

Whale watching in the Gulf of Thailand on Christmas Eve

We met our group on a dark Christmas Eve morning outside 7-11 by Udom Suk BTS station. As it was 6am, the sun had not yet risen and the bread vans were still delivering their products to the shop. After picking up some 7-11 delights for breakfast (mmmm, 7-11 toasties), we piled into two minivans. Our group was all Thai except for us. Perhaps Christmas Eve is not a popular whale watching day for foreigners?

It only took about 50 minutes for us to reach Moo Baan Pramong in Samut Sakhon District – where one of the Bangkok area’s many canals led to the sea. There, many seafood restaurants on stilts strutted into the river, next to stilt houses and brightly-coloured fishing boats, loaded with ropes and home-made floats. The flat expanses of land either side of the river seemed far from the city of Bangkok with its high-rise landscape. 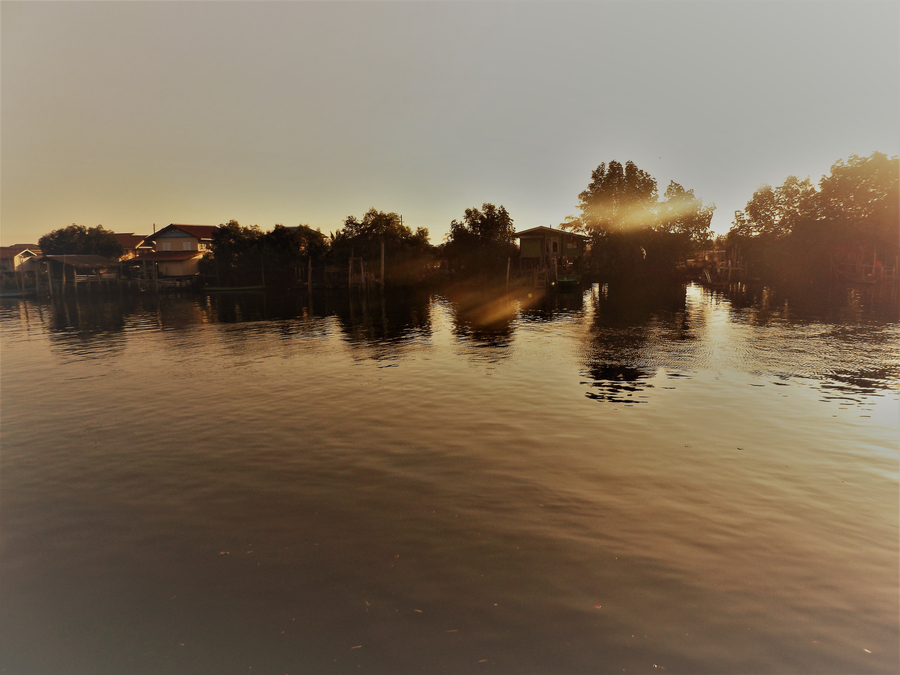 Sunrise from the Gulf of Thailand 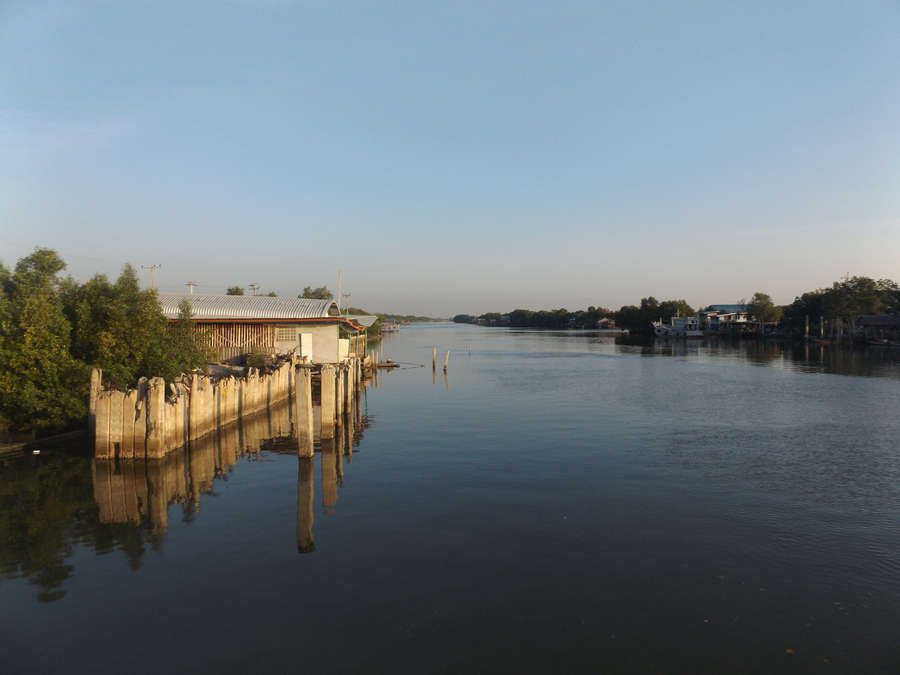 River looking beautiful in the morning

It was a beautiful December day. Winter around Bangkok is a great time of year. The rain has stopped and the sky is blue. There is a lot of sunshine, but it’s cooler than the rest of the year so you can actually spend time in the sun without immediately burning to a crisp. Although it was still early, the sun was climbing into the cloudless blue sky and glistening off the water around us.

Our boat had two decks, including toilets and an inside seating area, where we gathered for a talk about the biology and evolution of cetaceans. This was in Thai, but one of the interns assured us she would translate later.

In a past life, during my Masters’ degree, I studied cetaceans, so we could understand most of what was being said from the slides. I spent three months working on whale watching boats around Tenerife with a volunteer project. Projecto Ambiental Tenerife, now called The Atlantic Whale Foundation,  working with the whale watching industry, promoting sustainable whale-watching and researching the resident short-finned pilot whale population. One of my Masters’ projects was analysing photo-id data to determine social structure of the pilot whales.

Check it out. A huge number of the World’s cetaceans travel through the Canary Islands every year, and there are resident populations of short-finned pilot whales and bottlenose dolphins. It’s a fabulous whale watching destination and Tenerife is an incredibly ecologically diverse island. It’s not all getting sunburned while drinking beer in the sun.

But back to Thailand.

My experience in Tenerife meant that I knew a lot of what she was saying, even though it was in Thai. However, as promised, she came and answered all our questions personally after the talk. There are now around 55 Bryde’s Whales in the Upper Gulf of Thailand. There were more, but several were killed this year. Whether it was from the pollution in the Gulf, illness or accidents with fishing boats is unknown.

Bryde’s whales are baleen whales (rather than toothed whales) meaning that they have baleen plates rather than teeth, and feed by taking huge amounts of water into their mouths and filtering it through their baleen plates, to feed on krill. Bryde’s whales are said to be medium-sized baleen whales, but in whale terms, that means that are still over 40 meters long and can weigh up to 45 tonnes.

Unlike some other cetacean species, Bryde’s whales are quite solitary. Where they are seen in pairs, they are usually a mother and calf. Putting that together with them living in the water, they can be hard to spot. We were lucky in the morning of our trip when our crew spotted a pair of whales and took us closer to have a look. 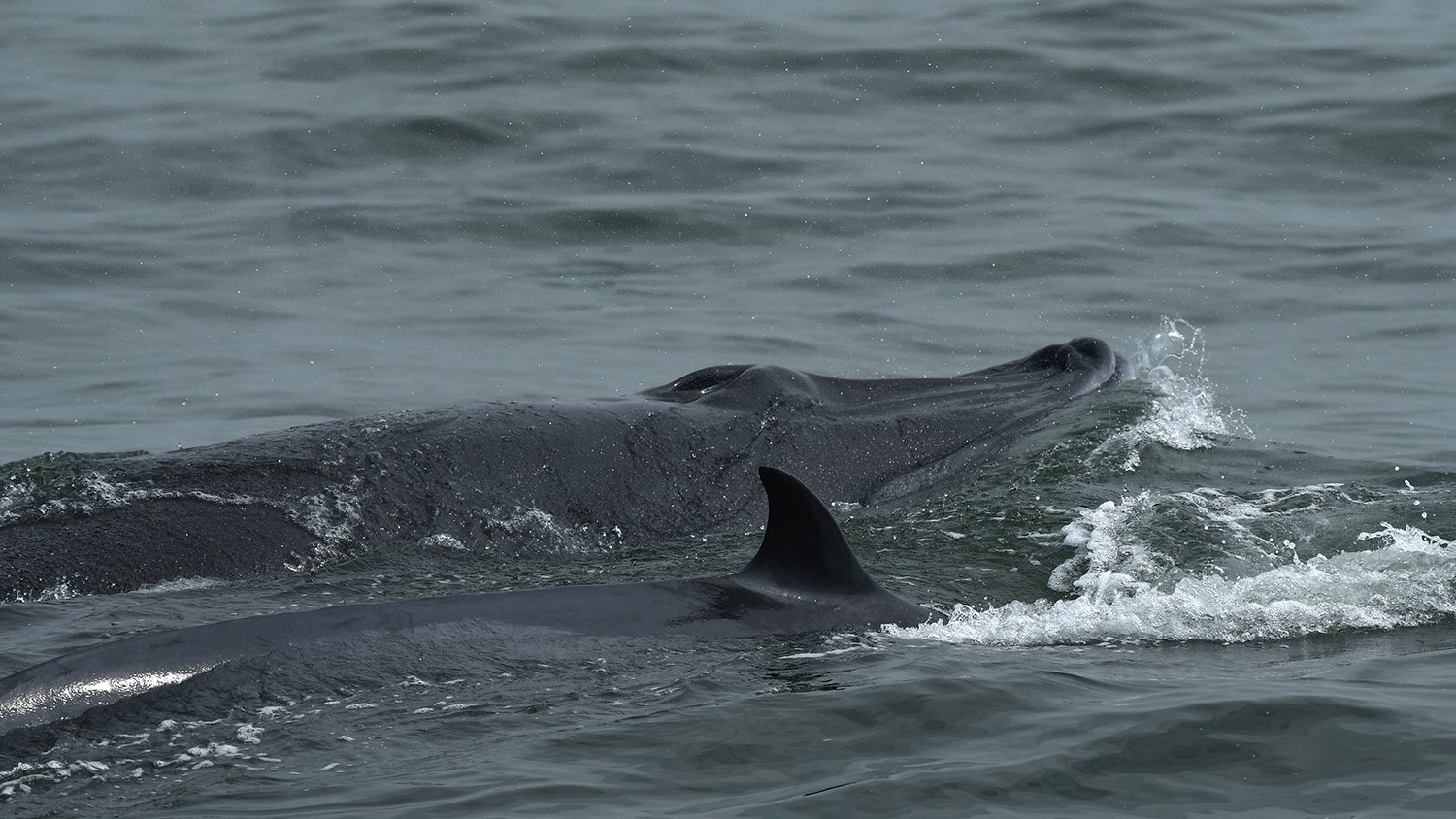 The mother and calf, known to the crew from their photo-id project, were slowly swimming around, treating us to occasional fins coming out of the water, and sprays from their blowholes. At one point the calf’s head popped out of the water as if to look at us. We sat and watched them for over an hour. The boat driver kept a respectful distance, but followed them and pulled the boat side-on regularly so we could get a good view. 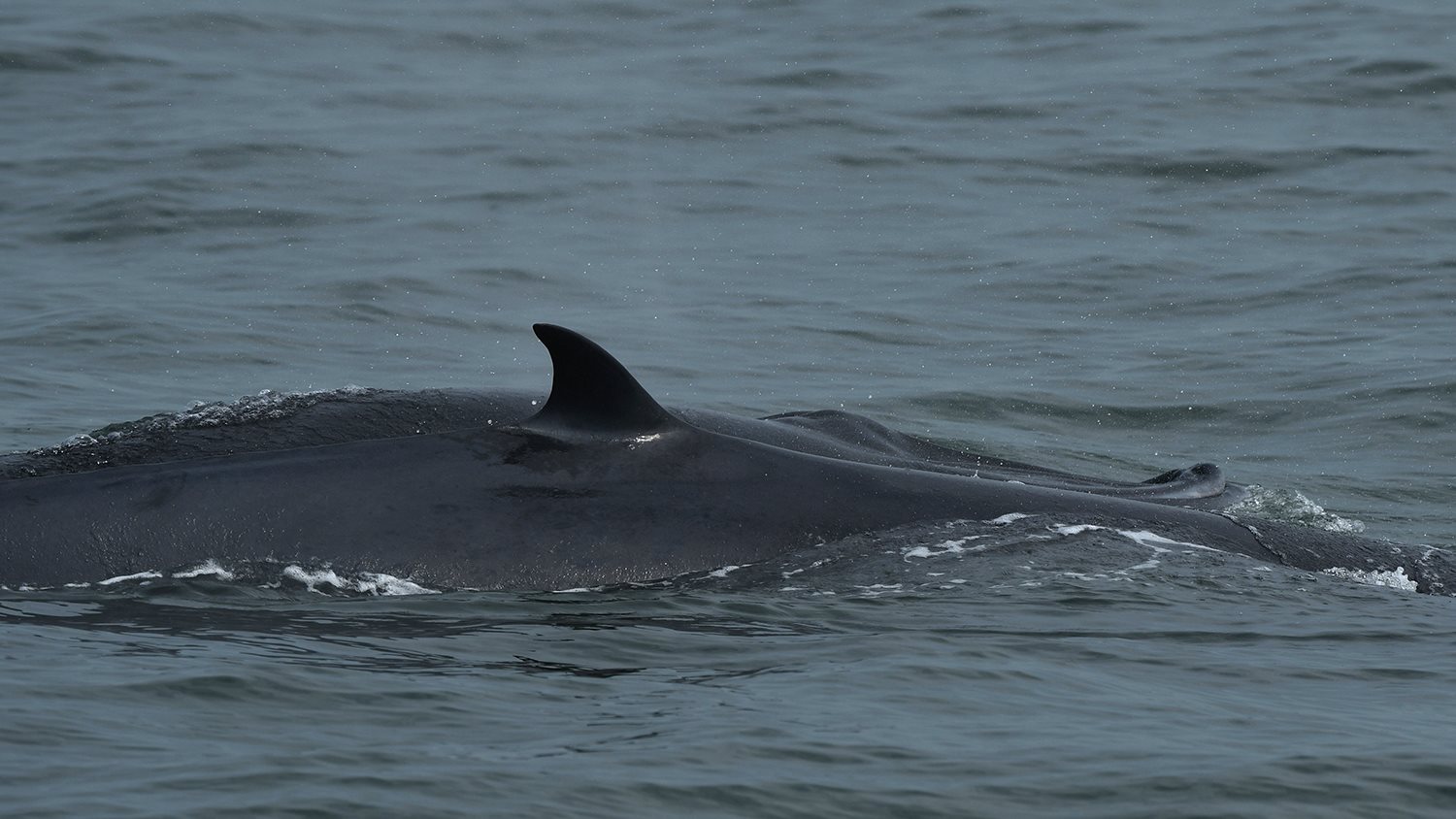 Wild Encounter Thailand use regulations they have compiled from other countries to control how close they can get, when they turn off the boat engine and how many boats can be around whales at any one time. As they said, they never get in front of travelling whales.

I tried to get good photos of the Bryde’s whales, but….they are very swimmy. They’d appear above the water for a while, but by the time I had focused my camera on them, they were gone. I tried to move the camera ahead, thinking that they’d come up a bit further in front, but they’d just reappear at the other side of the boat. Sneaky things. I got a lot of pictures of water.

In the end, I gave up trying to get photos and just enjoyed sitting in the sunshine, watching the Bryde’s whales peacefully swim around.

Luckily, the guys from Wild Encounter Thailand were much better at taking photos of them than me, and had a much bigger lens. They kindly allowed us to use some of their photos from the day in this blog.

Read more: Where to see animals in Thailand

Irrawaddy Dolphins in the Gulf of Thailand

Suddenly, in the distance, we saw lots of splashes as something seemed to leap out of the water. Irrawaddy Dolphins said the crew. They followed the splashes around so we could watch a pod of about 5-6 small dolphins jumping out of the water in synchrony. 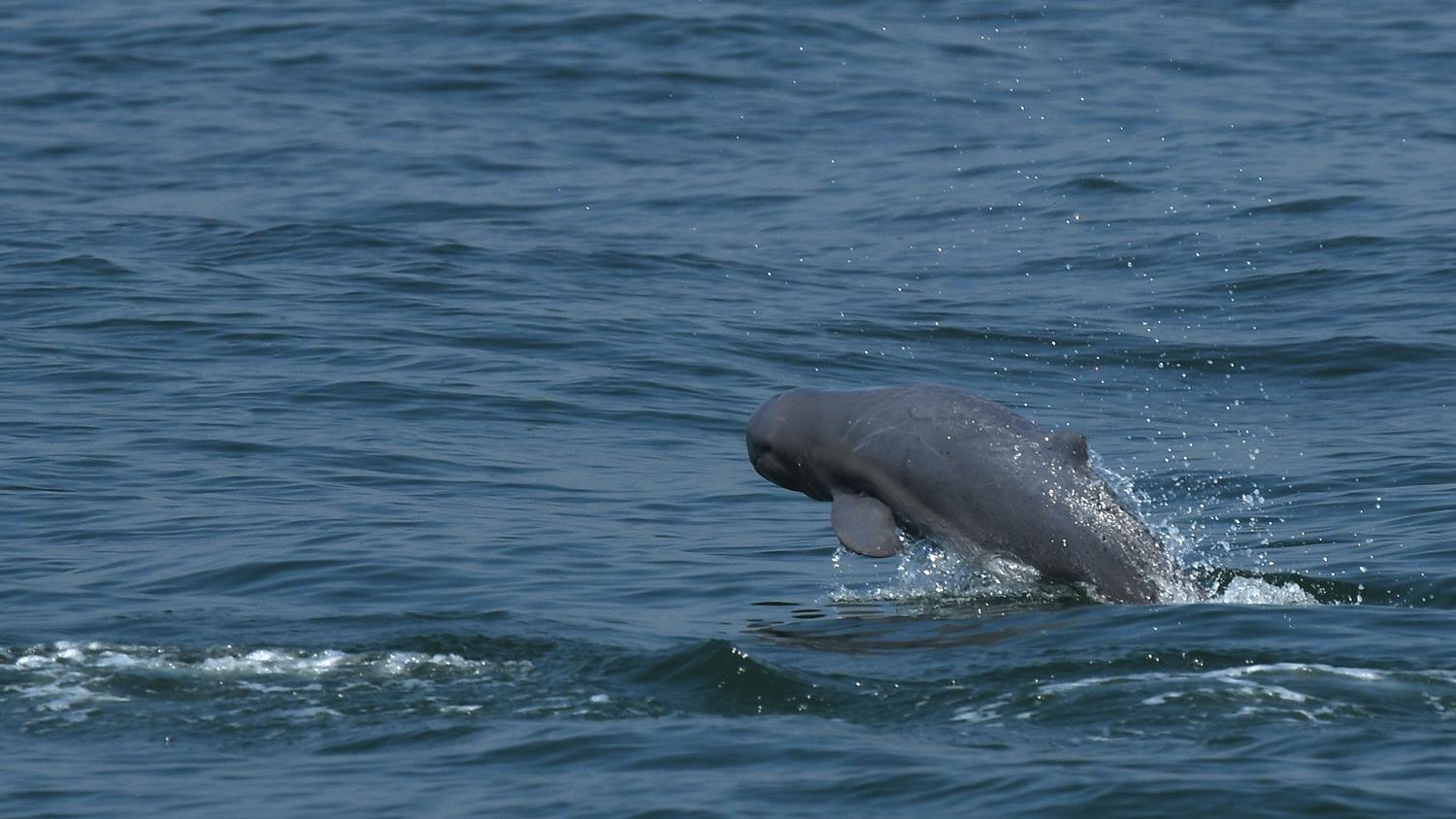 Funny looking little things, Irrawaddy dolphins have weird rounded foreheads and look like they are constantly smiling. They’re sometimes known as river dolphins, because they inhabit rivers in the region as well as the coastal waters, and sometimes pink dolphins (although they didn’t look very pink). The exact number of Irrawaddy dolphins in the world is unknown, but they are listed as ‘vulnerable’ in the Red Data book so it was amazing to see them in the wild. There are often Irrawaddy dolphins in the Gulf of Thailand, so this trip was great to catch them.

On rubbish and plastic

After leaving the mother and calf Bryde’s whales and the Irrawaddy dolphins, it was time for lunch. We were given a Thai buffet lunch of pork, vegetables and omelette with rice, and as much water and soft drinks as we wanted for the whole day. To save on plastic, they gave us each a cup to stick our name on, which we could then drink out of all day. Much better than plastic bottles.

Speaking about plastic, while it was lovely sailing around the Gulf of Thailand, we couldn’t help notice the rubbish. The sea was full of trash – plastic bags in particular, but also plastic bottles and packages from snack food. The rivers and canals that feed into the Upper Gulf of Thailand come from Bangkok, and they are used as dumping grounds for rubbish. And there is a lot of rubbish.

It’s hard to buy anything from 7-11 without getting a bag. We have to pay close attention at the till because the shop assistants automatically put everything you buy in a bag. Why I need a bag for a packet of chewing gum, or a bottle of water I’m about to drink, I don’t know. When we get our shopping delivered from Tesco it comes in so many plastic bags. Often individual items have their own bags. I don’t know whether Thailand has more plastic waste than other countries, although a recent study found that it is one of 5 countries contributing 60% of the plastic entering our oceans.

In the afternoon we sailed around looking for more Bryde’s whales, but they proved to be elusive. However, we just sat on the top deck of the boat, enjoying the winter sunshine and the peace of the sea around us. I love boat trips generally, so it wasn’t so disappointing to not see any more whales. 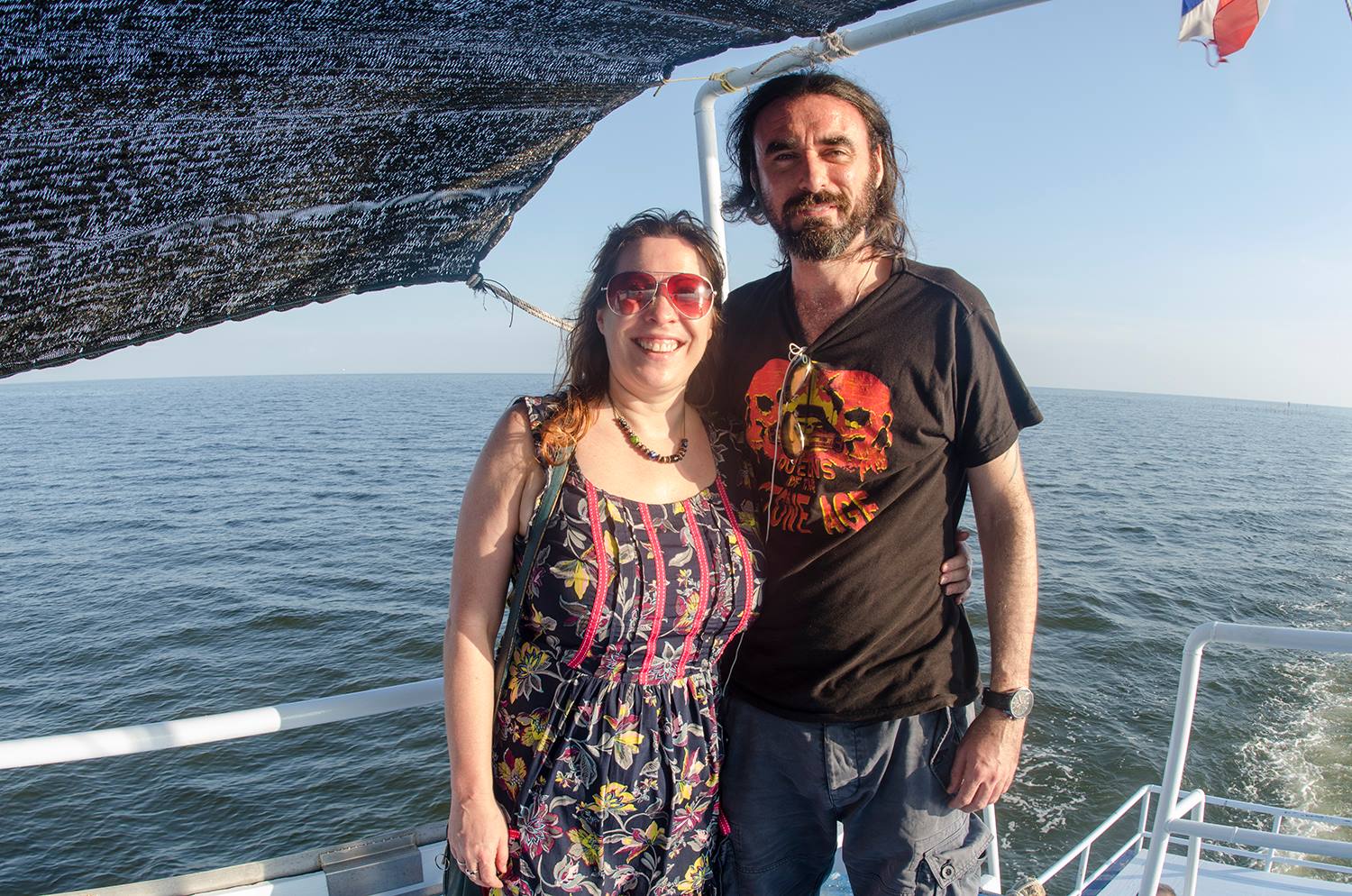 Looking a bit windswept on the Wild Encounter Thailand boat

If you don’t see any whales on your trip, Wild Encounter Thailand give you a free return trip. We felt we had had some great experiences with the Bryde’s whales and Irrawaddy dolphins we saw.

At about 3.30 we were gathered back downstairs in the seating area for another short talk in Thai and a raffle for one of the Wild Encounter Thailand t-shirts. We didn’t win. There was also Thai style dessert of green jelly in coconut milk. We’re not big fans, so we didn’t have any. The Thai guests seemed to love it though.

After this we headed back to land, passing mussel and cockle farms, with the shellfish growing on long poles stuck in the water, and many seabirds – guillemots, terns and various sizes of cranes. 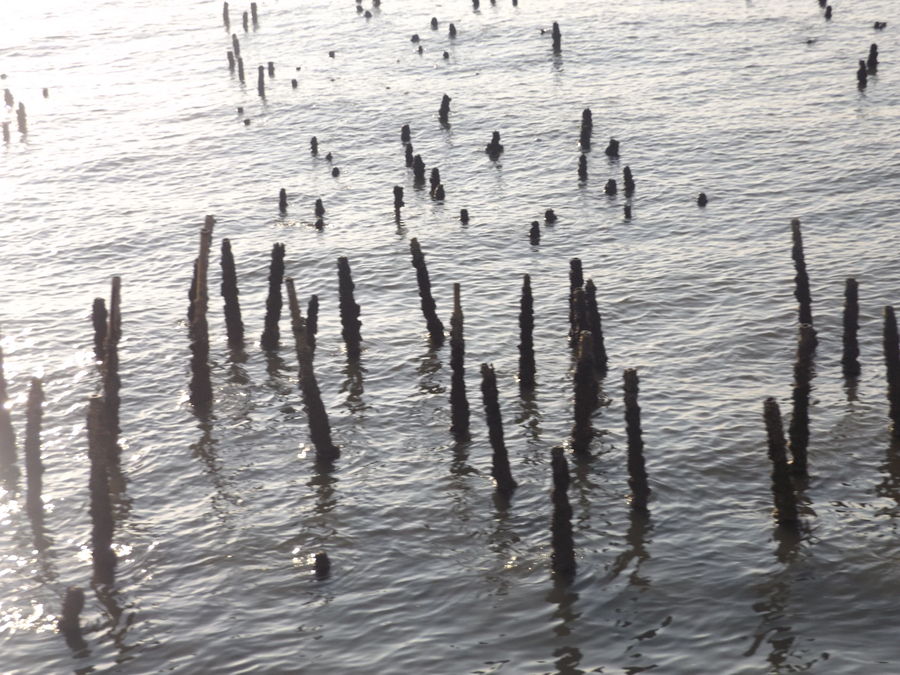 mussell farms in the Gulf of Thailand 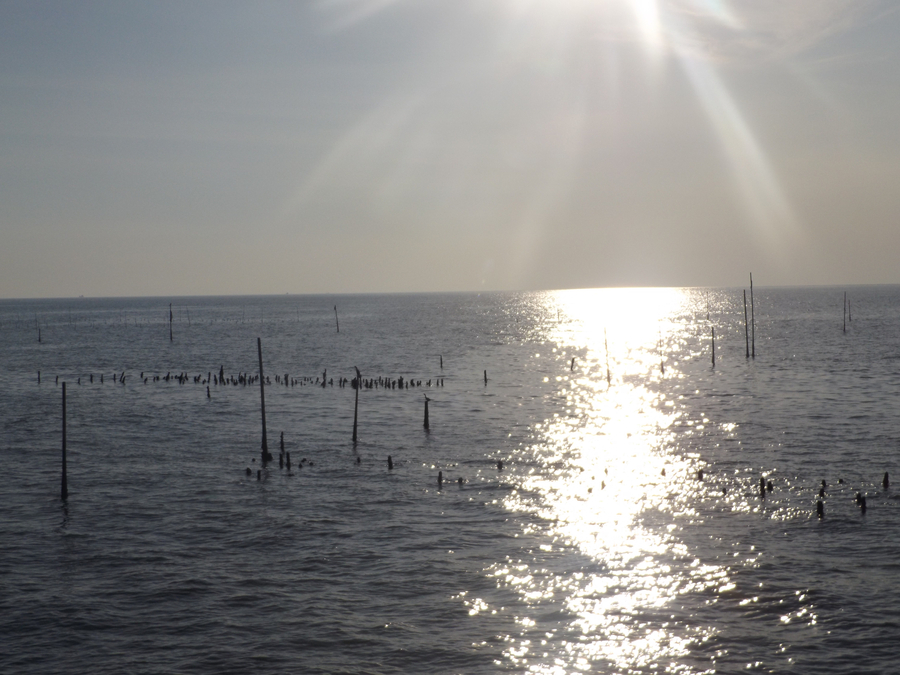 Sunset on the Gulf of Thailand 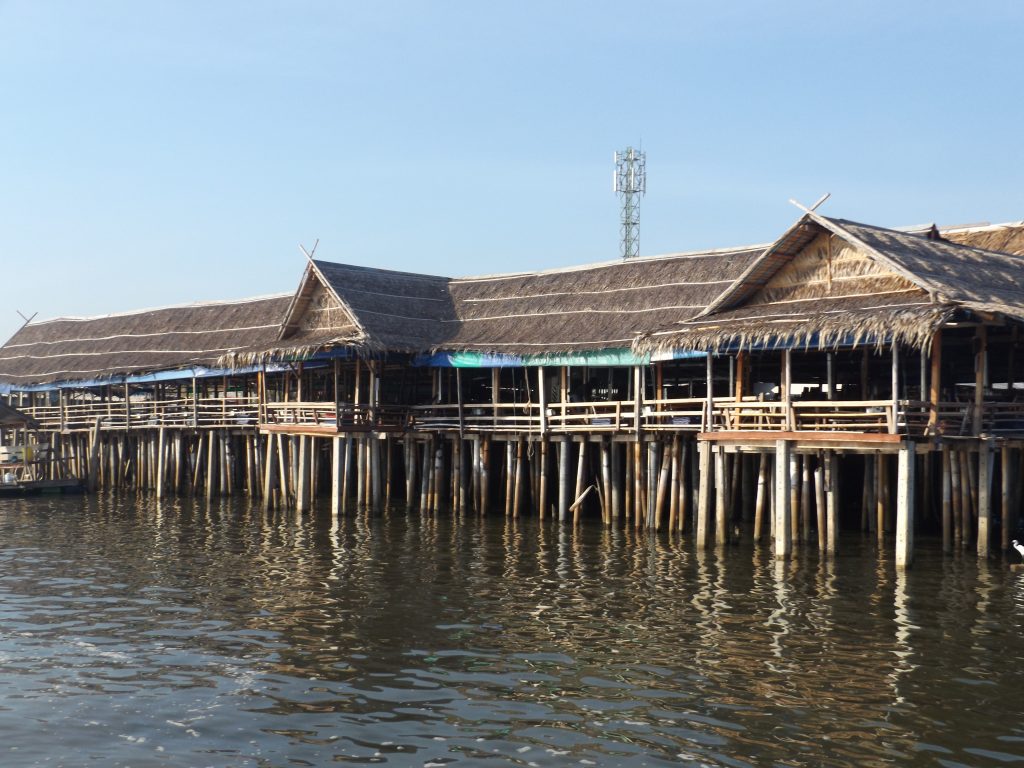 Stilt houses on the Gulf of Thailand 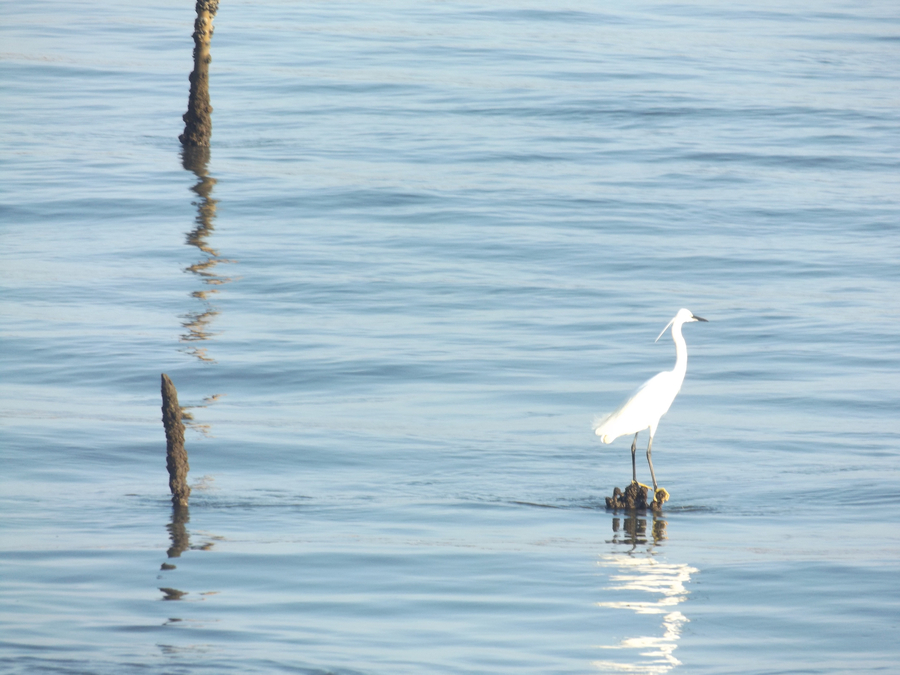 Bird watching in the Gulf of Thailand

Despite worse traffic than at 6am, we got back to Bangkok in about 1 1/2 hours. It was Christmas Eve! We headed out into the city for some pre-Christmas drinks, to soak up the atmosphere and admire the various Christmas themed headgear people were wearing. However, we were exhausted and couldn’t wait up for Santa, heading home at about 10pm.

All in all, an excellent day whalewatching in the Gulf of Thailand with Wild Encounters, Thailand. Yes, you can go whale watching from Bangkok. And you can see Irrawaddy dolphins in the Gulf of Thailand. And yes, you should! It was a great escape from the bustle of the big city and a lovely insight into a part of the area we’d not experienced before. Above all that, there were whales and dolphins. What could be better? 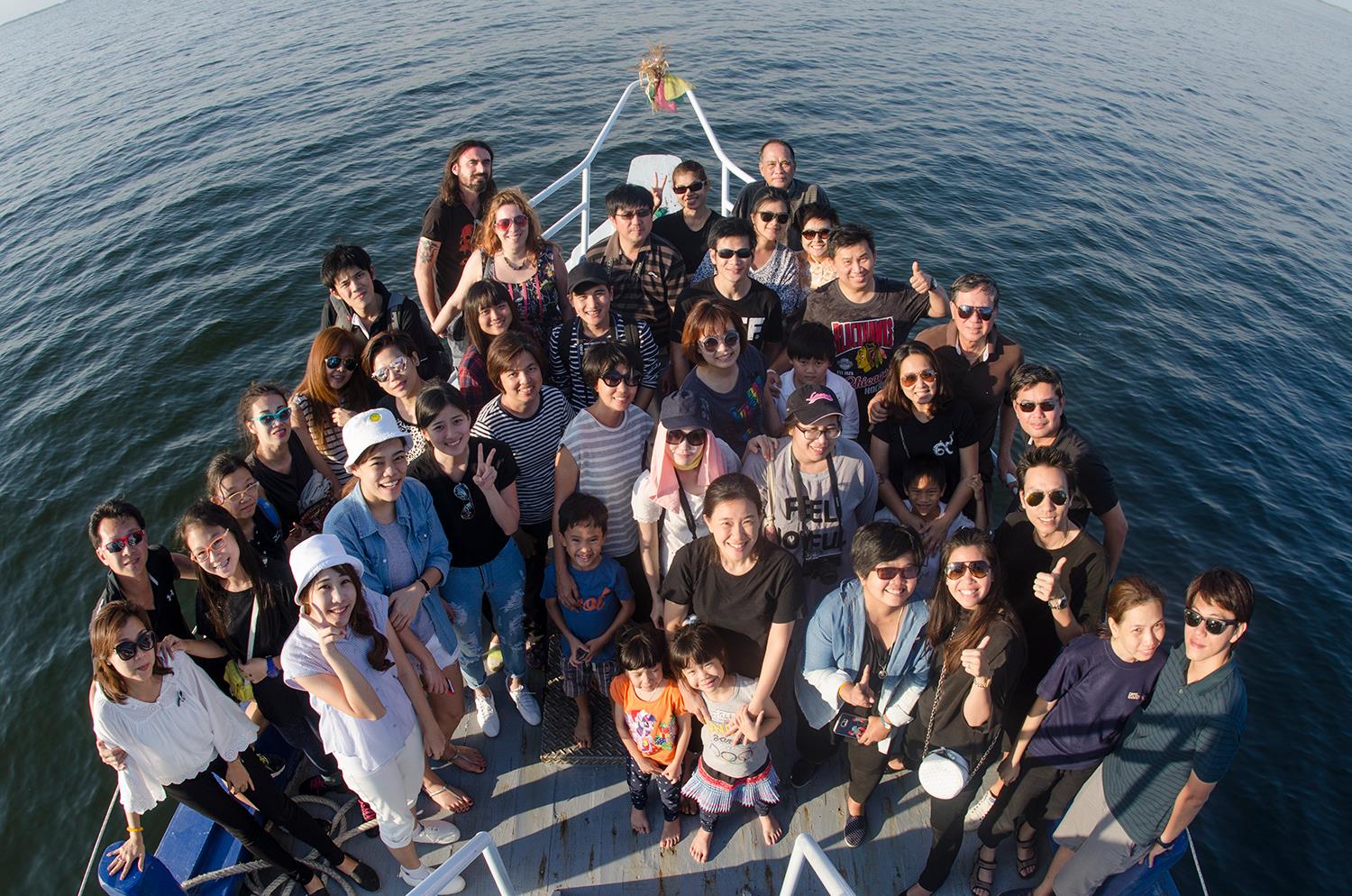 With our fellow whalewatchers on the Wild Encounter Thailand boat

We had some other great wildlife watching experiences in Thailand:

Searching for the Great Hornbill in Kaeng Krachan National Park

Getting mugged by monkeys in Lopburi

Why not pin this for later? 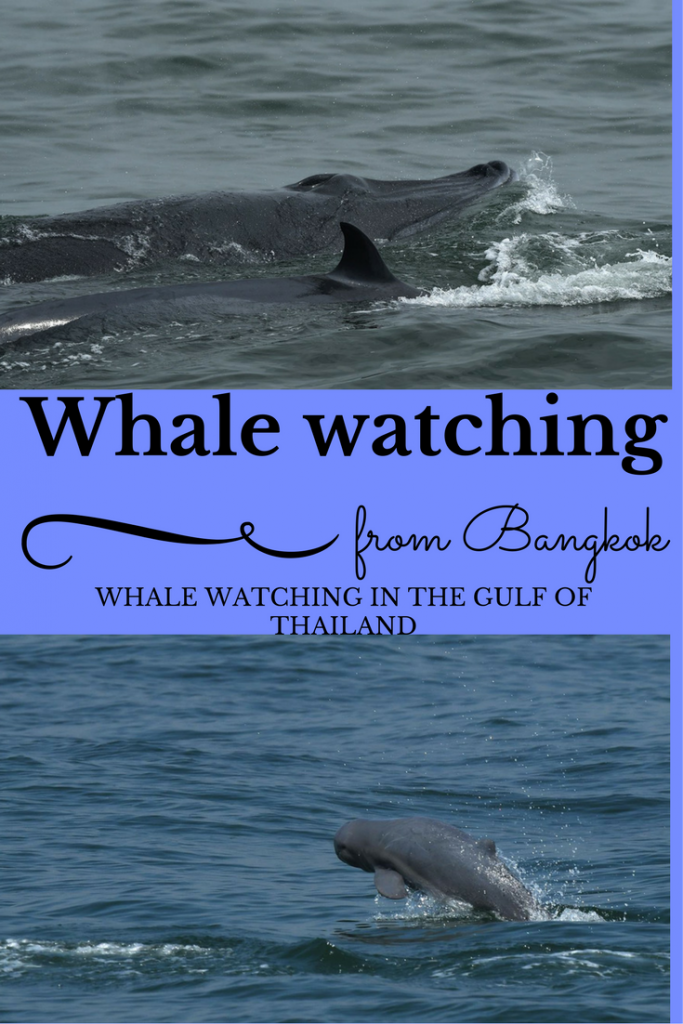